A civil war in Yemen marked by foreign meddling has created an unparalleled humanitarian disaster with no end in sight, even if a truce were agreed upon. 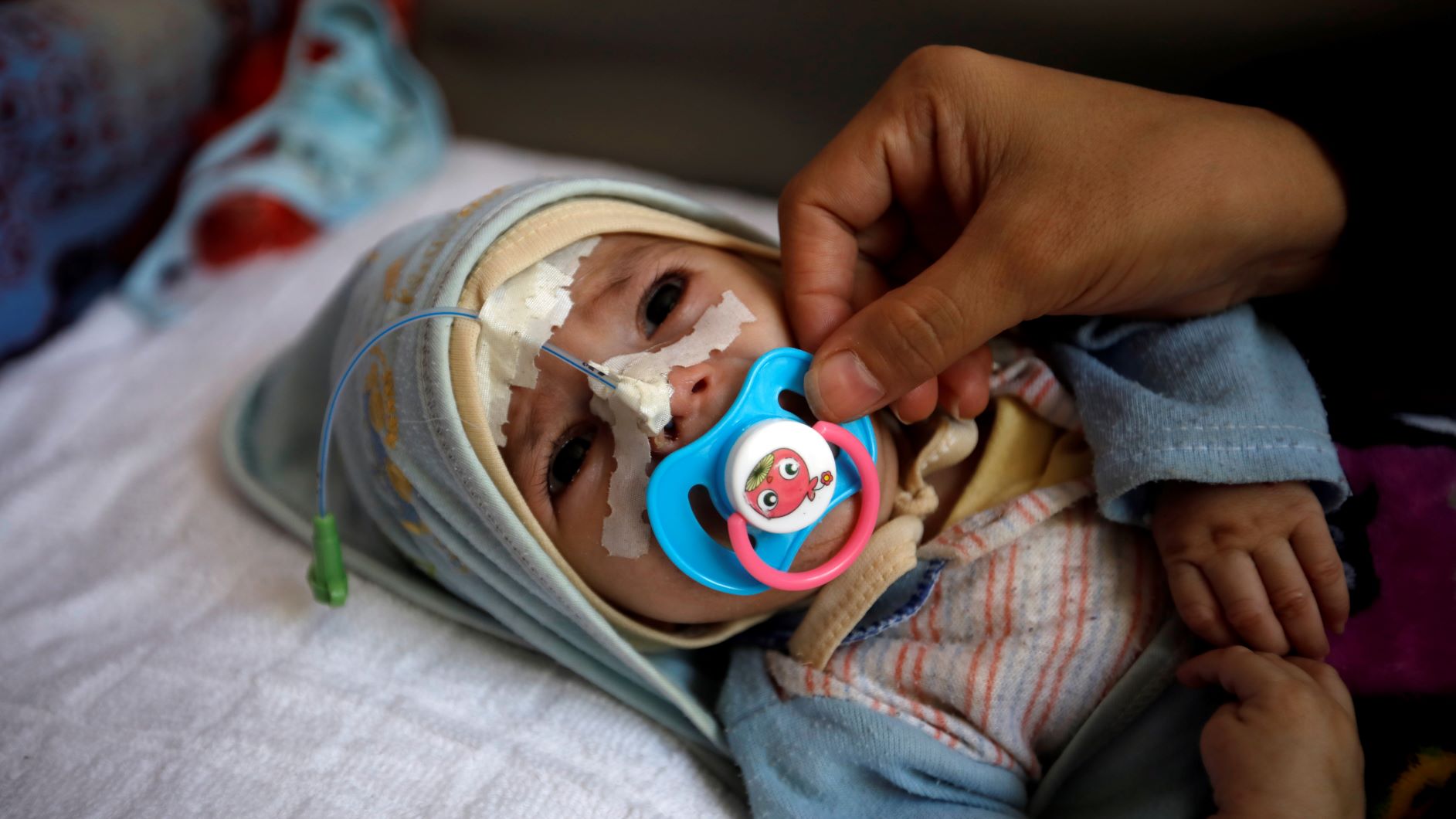 A malnourished child waits to be fed at a hospital in Sana’a, Yemen, 21 March 2021. (EPA-EFE/YAHYA ARHAB)

A decade ago, hopeful young Yemenis hit the streets of Sanaa to call for social justice and an end to decades of corrupt dictatorship, as waves of protest rocked the Arab world.

Instead they got a civil war, foreign meddling and a country in ruins.

Former President Ali Abdullah Saleh had ruled Yemen for 33 years, managing and exploiting its myriad internal conflicts to stay in power as kleptocrat-in-chief.

Gulf Arab dynasties, alarmed by any whiff of democracy, arranged a soft landing for Saleh, inducing him to stand down in 2012 with immunity from prosecution and a continued political role.

They replaced him with his former deputy Abd-Rabbu Mansour Hadi as part of a United Nations-backed political transition dominated by established parties.

Two years on, the Houthis, a disaffected Zaydi Shi’ite revivalist movement in the north, cut short the stalled transition by seizing Sanaa and driving on towards the southern city of Aden in a thwarted attempt to overrun all of Yemen.

The battle-hardened Houthis, loosely aligned with Iran, now have the upper hand against Hadi’s Saudi-backed government, an alliance of factions often more focused on fighting each other than their common enemy.

Yemen war may be grinding to a messy end-game.

Saudi Arabia and the United Arab Emirates intervened six years ago, with Western weaponry and other support, in a conflict that has helped plunge millions of Yemenis into a man-made abyss of hunger and distress unparalleled in the world today.

“Despite ongoing humanitarian assistance, 16.2 million Yemenis are food insecure,” according to the World Food Programme. That is more than half of the country’s population at the southern end of the Arabian Peninsula.

The men with guns, drones, missiles and bombs have, temporarily perhaps, silenced the young people, women and civil society groups who first cried out for change.

“Yemen is suffering from a backlash, a counter-revolution designed initially to prevent young people having a say in how the country was run,” Peter Salisbury, senior Yemen analyst for the International Crisis Group, told me.

The war may now be grinding towards a messy end-game, as the Saudis seek a face-saving exit from their failed attempt to crush a movement they see as a proxy for Iran.

Iran has indeed helped the Houthis with drone and missile technology and other support, but Tehran has not shown it can give orders to the group, which it did not create and which is not ideologically bound to the Islamic Republic.

“The Iranians play an important and growing role in Yemen, but they don’t have the Houthis on remote control, as some people might assume,” Salisbury said.

The United States, which along with Britain and France backed the Saudi-led coalition as it bombed and blockaded much of Yemen for the past six years, is now ending its support for their war effort. It has suspended sales of “offensive” weapons and appointed a Yemen envoy, Tim Lenderking, to support UN peace efforts.

The Saudis, under pressure from new U.S. President Joe Biden, have dusted off proposals for a nation-wide truce, the partial reopening of Sanaa airport and Houthi-held ports and a sharing of customs revenue.

Unimpressed, the Houthis demand an unconditional end to what they call a Saudi siege before considering a ceasefire.

Houthi forces, buoyed by perceived Saudi weakness and rifts among their Yemeni foes, have multiplied drone and missile attacks on Saudi oil installations and other targets in recent weeks.

They have also assaulted Marib, the Hadi government’s last outpost in the north. The capture of Marib, a region with gas, oil and a population vastly swollen by displaced Yemenis, would significantly strengthen the Houthis’ hand in any peace talks.

The Houthis might yet suffer setbacks on the ground, but they have proved that the Saudi-led coalition and its local allies cannot destroy them.

The chastened Saudis may have to abandon many of their war aims and cut a direct deal with the rebel militia to try to secure their own territory from attack.

The Houthis hold land where at least 70% of Yemen’s people live. Their opponents are based in Aden, where Hadi is yoked in an uneasy coalition with UAE-backed southern secessionists. The president enjoys international recognition, but his administration has little credibility inside or outside Yemen.

Achieving a ceasefire, let alone a lasting peace, will be difficult.

The Houthis do not trust the United States, still an ally of Saudi Arabia despite Biden’s reset of relations with the kingdom and his evident distaste for Crown Prince Mohammed bin Salman, de facto ruler and architect of the war.

The Houthis also look askance at the United Nations, whose envoy leads negotiations supposedly based on a one-sided Security Council resolution adopted when the war began demanding Hadi’s restitution as well as Houthi withdrawal and disarmament.

That resolution, which reflects the position of Saudi Arabia, a main party to the war, remains in place, defying the balance of power on the ground.

Even if a truce is eventually agreed, it will come too late for many.

Already 80% of Yemenis need help, and the United Nations warns of famine in a shattered country where many cannot afford to buy food.

Cholera and coronavirus outbreaks compound the misery. Fuel shortages cripple water supplies, hospitals and aid deliveries. The war has driven nearly four million people from their homes, according to the World Food Programme.

Yet rich nations disbursing vast sums at home to mitigate the impact of the global COVID-19 pandemic have chosen to slash humanitarian assistance to Yemen.

This month, donors, some of whom have reaped billions of dollars from arms sales to Saudi Arabia and the UAE, promised less than half the $3.85 billion sought by the United Nations. UN Secretary-General António Guterres said cutting aid was a “death sentence.”

Just as callously, corrupt Yemeni commanders, politicians and profiteers on all sides have grown rich off the “war economy” through extortion, looting and diversion of public salaries, tax revenue and foreign aid, while their compatriots starve.

Halting the main conflict would not necessarily stabilise Yemen, where a dizzying array of political, tribal and regional squabbles will complicate peace efforts.

“We could see an end to the big war, the bit that attracts all the international attention with Saudi air strikes, and still see a collection of small wars being fought by lots of different groups as they battle each other for dominance,” Salisbury said.

He argued for a broader approach by the UN to address grievances, bring in more parties and work with civil society groups not involved in the fighting.

Nesmah Mansour, a young Yemeni woman activist who formerly worked with a group advising the UN envoy, describes their experience as frustrating.

“They (UN officials and foreign diplomats) were listening only to the warring parties, the Houthis and the government, and ignoring any other voices with ideas for peace, like women’s groups working on local peace-building,” she said.

“The system of rewarding the war perpetrators has not worked for the past seven years, and we need a more inclusive and accountable peace process,” Mansour said, noting the mounting deprivation, insecurity and hunger stalking her country.

“It’s awful to see how the social fabric is being damaged. Year by year, reconciliation becomes harder.”

(For other News Decoder articles on Yemen, click here.)