Yemen’s civil war has accelerated the collapse of a fragmented Arab state, but don’t hold your breath for international action to mitigate war horrors. 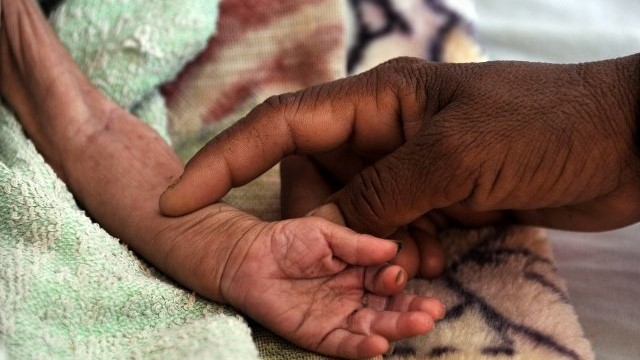 Images of skeletal Yemeni children dying of starvation may have flickered across your screens of late. Or pictures of the carnage after air strikes by a Saudi-led coalition killed more than 140 mourners and wounded hundreds more following a funeral in Sanaa on Saturday.

These are a few of the victims of an 18-month-old civil war, featuring a Western-assisted Saudi bombing campaign, that has accelerated the collapse of a fragmented Arab state already weakened by decades of misrule, corruption and instability.

When the Russian or Syrian air forces strike such targets in rebel-held parts of Syria, there is outrage in Western capitals, with talk of war crimes.

Yet when it comes to Saudi Arabia, an ally and major arms buyer, the United States and Britain dismiss protests against the carnage in Yemen.

Riyadh has denied its warplanes carried out air strikes in the Yemeni capital on Saturday near the hall packed with mourners after the funeral of the father of the interior minister in the Houthi-led administration. But Riyadh promised an investigation of the “regrettable and painful” incident.

The atrocity prompted even the United States to distance itself from Saudi actions, saying it had begun to review its support for the coalition and that U.S. cooperation with Saudi Arabia was “not a blank check.”

Britain, which has authorized arms sales to Saudi Arabia worth 3.3 billion British pounds ($4.1 billion) since the bombing began, last month stymied European Union efforts to create an independent international inquiry into civilian deaths in Yemen to determine whether war crimes have been committed.

Not that the Western powers were ever convinced of the wisdom of Riyadh’s military adventure in its neighbor, which runs counter to their declared interest in promoting a stable Yemeni government willing to help them combat the local branch of al Qaeda.

They have always been skeptical about Saudi Arabia’s perception of the Houthis as proxies of an expansionist Iran seeking to threaten the kingdom in its own backyard.

But the United States and its allies backed a Saudi-drafted United Nations Security Council resolution when Riyadh swung into action to repel Houthi/Saleh advances in March 2015.

The Saudis forged a coalition of Gulf Arab and other states for a war to reinstate the internationally recognized but otherwise underwhelming president, Abd Rabbu Mansour Hadi, in Sanaa.

Saudi anger over the international nuclear deal with Iran

Western powers can have been under no illusion that raining bombs on Yemen would rescue a transition plan that had installed Hadi in place of Saleh in an attempt to stave off civil war.

But unfortunately for Yemen, the United States, Britain and France were keener to placate Saudi anger over an international nuclear deal with Iran than to rein in their newly aggressive ally.

The Saudis, alarmed at the Obama administration’s distaste for engagement in the Middle East, had decided to go to war against what they saw as a new challenge from Shi’ite Iran in a struggle for regional and sectarian supremacy.

After all, the Houthis, bolstered by an alliance of convenience with their former enemy Saleh, had struck first in Yemen. Frustrated with flaws in the transition plan, the northern rebels tore it up by resorting to force. They have bombarded Saudi territory, and human rights groups say they have committed plenty of abuses of their own.

Their opponents are mainly Sunni Muslims who share hatred for the Houthi/Saleh alliance but have little loyalty to Hadi. They include tribesmen, southern secessionists and Islamists of the Islah party, as well as radical Salafi and al Qaeda-linked fighters.

Yemen’s 28 million people are paying a terrible price for a war no one can win.

The U.N. says the conflict has killed at least 10,000 people, including some 4,000 civilians, and forced three million from their homes. According to a U.N. report, the Saudi-led coalition inflicted 60 percent of the casualties among children last year.

The coalition’s blockade of a country that imports 90 percent of its food has worsened long-term shortages. Half the population now needs food aid, and 370,000 children are suffering severe malnutrition.

Many Yemenis went hungry even before the war. Much of the country’s rapidly depleting groundwater resources have been squandered on growing qat, the national drug.

Having failed to humble the Houthis militarily, the Saudis now appear bent on economic warfare by encouraging Hadi to dismantle one of the few national institutions still functioning.

The Central Bank had tried to stay above the fray, paying public salaries on both sides, financing food imports and keeping the banking system from collapse. Last month, Hadi sacked its governor and ordered its relocation from Houthi-controlled Sanaa to his government’s interim base in the southern city of Aden.

The upheaval at the near-penniless Central Bank, along with Houthi retaliatory measures, risk inflicting yet more pain on millions already struggling to survive.

Yemen is a chronic loser in the quest for global attention.

Its internal dynamics are fiendishly complicated, with leaders prone to seeking narrow factional advantage or lining their own pockets. Its small oil and gas industry is at a near standstill, underlining its economic irrelevance to the outside world.

Unlike Syria, Yemen has not yet even posed much of a refugee problem that might destabilize its neighbors, let alone distant Europe. Its people are largely trapped by poverty and geography.

If Yemen ever does pop up on the global radar, it is usually thanks to al Qaeda, which has exploited chaos to expand its footprint, with some competition from the self-styled Islamic State.

You can expect more harrowing pictures of emaciated children and air strike victims from Yemen. But don’t hold your breath for concerted international action to halt a futile war or mitigate a humanitarian disaster that aid agencies say dwarfs their capacities.