Why did Russia let Ukraine’s “Joan of Arc” go? 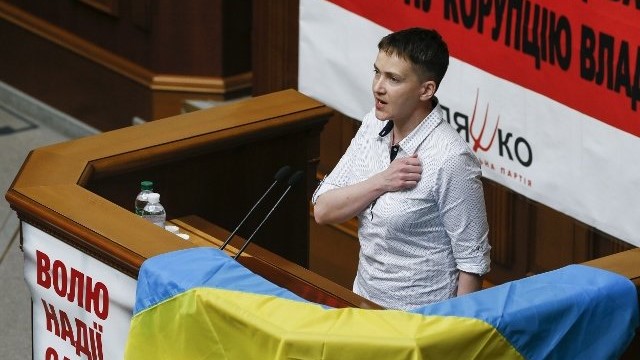 We asked two News-Decoder correspondents and a contributor why, two months after Moscow had said a prisoner swap was off the table, Russia freed Savchenko, who has become a symbol of Ukrainian resistance to Russia’s takeover of Crimea and incursions in the east of the Ukraine.

“Presenting a softer front for a purpose”

Nadiya Savchenko, captured in June 2014 while volunteering with a battalion in eastern Ukraine, was convicted in a legally dubious trial in Russia for allegedly directing mortar fire that killed two Russian journalists.

Under Russian President Vladimir Putin, convictions of dissidents and recalcitrant oligarchs are designed to show Russians the cost of opposition to the regime while upholding the image of a country with laws that work.

Putin wants Russia to resume an active role in geopolitics. In his mind, Russia has been ridiculed, denigrated and insulted since the fall of the Soviet Union. In Ukraine, he sees a chance to remind his neighbors and the world that Russia controls its periphery. He forced Russia into Syria in order to retake a seat at the grand table of world affairs.

Why did the Russian government go after Savchenko with the ferocity that it did? Putin might have hoped to demonstrate that Russia will not let attacks against other ethnic Russians go unpunished and to reiterate control of its periphery. After Savchenko’s situation gained more and more media attention, Putin decided he could use her as a bargaining chip.

Putin did not expect the amount of attention that Savchenko received. She displayed unyielding determination during almost two years in captivity. She went on hunger strikes and became an international symbol of Russian aggression, a hero in the press and a thorn in Putin’s side.

Releasing Savchenko now is a calculated step back: The Kremlin is presenting the exchange as Russia taking the humanitarian high road.

Pro-state media has said the widow of one of the journalists killed in the mortar attack requested that Savchenko be pardoned. Putin said he hoped the exchange “will lead to de-escalation of the confrontation in a certain conflict.”

Presenting a softer front is probably part of Russia’s strategy to win relief when European Union sanctions expire next month. While Savchenko was in captivity, she trained a negative spotlight on Russia. With Savchenko back in Ukraine, the media can focus on the dysfunction of Ukrainian politics.

In her first day in parliament, a plain-speaking Savchenko made it clear she wants a free, independent and reformed Ukraine. One risk is that her vocal, almost nationalistic, expressions of Ukrainian identity might alienate people in eastern Ukraine.

Ukraine has gained a powerful, though unpredictable, national symbol. Perhaps Savchenko can drive more effective reform through parliament. And while Putin seems to have come off worse in the short term, he may be closer to achieving medium-term goals.

For Svetlana Alexievich, the 2015 Nobel Literature prize-winner from Belarus, Nadiya Savchenko is nothing less than Ukraine’s Joan of Arc.

Not only did Savchenko endure two years in Russian prisons, but she did so with a constant defiance that endeared her to a population awaiting her release.

And her behavior on her return underlined the uncompromising image of the 35-year-old Kiev-born army pilot who was exchanged for two Russian servicemen taken prisoner during fighting in eastern Ukraine.

First, she refused to cozy up to the politicians, holding President Petro Poroshenko at a distance when she flew home and offering Poroshenko no thanks for his efforts for her return. Then, she recoiled from a hug and turned down flowers offered by Yulia Tymoshenko, a former prime minister who had engineered Savchenko’s election to parliament in 2014 on the list of her Fatherland party. Savchenko explained that the two women were not so far well acquainted.

At a news conference after her return, Savchenko was asked if she would be willing to run for president. “Let’s put it this way,” she said. “Ukrainians, if you need me to become your President, okay, I will be your President.” But, she insisted, her real passion remained flying.

On Savchenko’s first day in Ukraine’s parliament, she turned up early to find the building closed and remarked that politicians have an easier life than soldiers.

The popular and gutsy Savchenko would be a huge asset to any of Ukraine’s political parties. For the moment, however, she is making it plain that she will be extremely hard to get.

Putin’s strength is his popularity. With euphoria over the annexation of Crimea slowly fading, Russian media is working round-the-clock to find more inspirational stories. The exchange of Savchenko for two Russian servicemen was supposed to be such a story.

The official reason for her release was a letter from the mother of Savchenko’s alleged victim, a Russian journalist. In a rare move, Putin himself announced her release. Clearly, the liberation of the two Russian intelligence officers was meant to be seen as another great victory by Putin.

It didn’t work this time. The mood in the country is slowly changing. The arrival of the officers attracted very little attention in the media, partly because of the contrast with Savchenko’s triumphal return. The propaganda machine is starting to stumble, and the consequences for Putin could be devastating in a long run.

Too many forces were involved in this situation. Theories abound, from Savchenko being Putin’s secret weapon for competing with President Poroshenko, to the exchange being part of a bigger deal with the West. But one should avoid black-and-white reading here. Both Russia and the West played the Savchenko card to their advantage.

One thing is certain, though. With her strong personality and popular support, Nadiya Savchenko is not playing by anyone else’s rules. She does, in fact, bring a certain unpredictability to the political realities of Ukraine and to its conflict with Russia.

Simon Hoellerbauer (@hoellerbauers) is an Associate Scholar with the Foreign Policy Research Institute’s Eurasia Program and a recent graduate of Kenyon College. This fall, Hoellerbauer will start his doctoral studies in Political Science at the University of North Carolina. He will focus on democratization and democracy promotion.

Julian Nundy joined Reuters in 1970 and was posted to Moscow, Paris, then Brussels, with stints in the Middle East reporting on the Lebanese civil war and the Iranian Islamic Revolution. As a staffer for Newsweek, the International Herald Tribune, The Independent and Bloomberg, he covered the 1982 Israeli invasion of Lebanon, the assassination of Egypt’s Anwar Sadat, conflict in Bosnia and Ukraine’s Orange Revolution.

Rashad Mammadov (@rashadmammadovm) is a PhD candidate at Indiana University’s Media School, with a research focus on political communication. He holds a master’s degree in journalism and mass communication. He worked as a reporter and editor for almost a decade in newspapers and magazines covering international politics and media economics.