Watch out Americans. Cricket is coming.

It’s quintessentially English. But Americans are about to see a jazzed-up version of cricket, and TV companies are rubbing their hands. 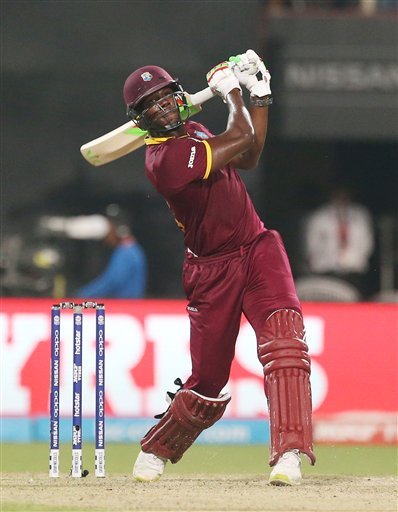 Carlos Braithwaite of the West Indies hits a “six” — cricket’s equivalent to a home run in baseball — and helps his team defeat England in the final of the Twenty20 World Cup. The colorful uniform of accelerated cricket contrasts with the all-white kit worn in test matches. 3 April 2016. (AP Photo/Bikas Das)

Winston Churchill described Britain and the United States as two nations divided by a common language. Sport is almost as big a source of mutual incomprehension.

Most Britons know nothing about American football and like to point out that the United States is the only nation represented in baseball’s World Series.

Americans, on the other hand, are very recent converts to soccer, the number one sport in just about every other country.

But things might be about to change. It was announced on April 3 that Fort Lauderdale, Florida, will host a contest in July featuring the quintessentially English game, cricket, but in an accelerated format that organizers hope will catch Americans’ fancy.

The Caribbean Premier League said six teams from the West Indies, including leading cricketers from other countries, will play in the 10,000 capacity Lauderhill stadium over four days.

They will take part in a Twenty20 tournament, where games last only three hours. That’s a blink of an eye compared to the possible five days in international contests between leading cricket countries, known as “test” matches.

Television has changed the nature of the game.

Twenty20 cricket, invented a bit over a decade ago, has similarities with baseball. It is usually played under lights at night, and each team has 11 players who bat once against a maximum 120 deliveries — called “pitches” in baseball. The team that scores the most runs wins, unlike longer versions of the game that can end in an excruciating draw — not an outcome beloved by American sports fans.

Cricket dates back to the Middle Ages, but it began to flourish in the 18th century as the British empire was starting to expand. The 10 full members of the sport’s governing body, the International Cricket Council, are England and nine of its former colonies. It is now the main sport for most of the 53 British Commonwealth nations.

Traditionalists say the sport’s ethos extended well beyond the playing field. The expression “it’s not cricket” was used to condemn unfair behavior of all kinds.

But since the development of one-day matches and more recently of Twenty20 — designed to appeal to television audiences with fast scoring and decisive results — cricket has come to mean big money.

Previously funded by contributions from member countries, the ICC is now estimated to have revenues of $2.5 billion from sales of broadcasting rights.

Cricket was transformed by an unprecedented auction in Mumbai on February 20, 2008.

After eight city-based franchises had bid against each other for the world’s top cricketers, India captain Mahendra Singh Dhoni emerged richer by $1.5 million before a ball had been bowled in the Indian Premier League (IPL), which was neither organized nor controlled by the world governing body. The IPL has proved a spectacular success, particularly in Mumbai where cricketers enjoy a celebrity status equal to Bollywood film stars.

The successes of the West Indies in winning the men’s and women’s Twenty20 World Cups in Kolkata on April 3 and the under-19 World Cup in February offer a telling commentary on the modern game.

Between 1980 and 1995 their test side, comprising players from the Caribbean islands and Guyana, was probably the best ever assembled and remained unbeaten. Fast forward to this year when the West Indies’ test side barely put up a fight in a one-sided series against Australia.

While the test team was being humiliated, several prominent West Indians were taking part in the Big Bash League, Australia’s domestic Twenty20 competition.

Channel 10, which has the television rights to the Big Bash League, enjoyed a bumper summer of advertising. The share price of the rival Channel 9 network, which televised the Australia-West Indies test series, fell 25 percent this week after its latest results revealed a slump in advertising.

Can the traditionalists’ version survive?

The April 3 final proved a wonderful advertisement for Twenty20 cricket when the towering West Indian Carlos Braithwaite struck the last four deliveries from hapless England bowler Ben Stokes into the crowd for a maximum six runs each.

In another sign of the times, Afghanistan, where cricket is the only sport approved by the Taliban, had earlier defeated West Indies in a group game and run England desperately close.

Braithwaite plays for the Delhi Daredevils in the Indian Premier League, where he will earn more than $600,000 for six week’s work, although he has scarcely played any international cricket. Even though he hails from Barbados, birthplace of a host of great cricketers, he will represent St Kitts in the Caribbean League.

Test cricket, with its infinite subtleties and strategies, remains the game of choice for devoted cricket followers. Whether that will be the case for the next generation of players is the burning question facing the sport’s administrators and advertisers.