A Sicilian court has ruled politicians and police encouraged deadly car bomb attacks, shining a light into Italy’s long and bloody fight against the Mafia. 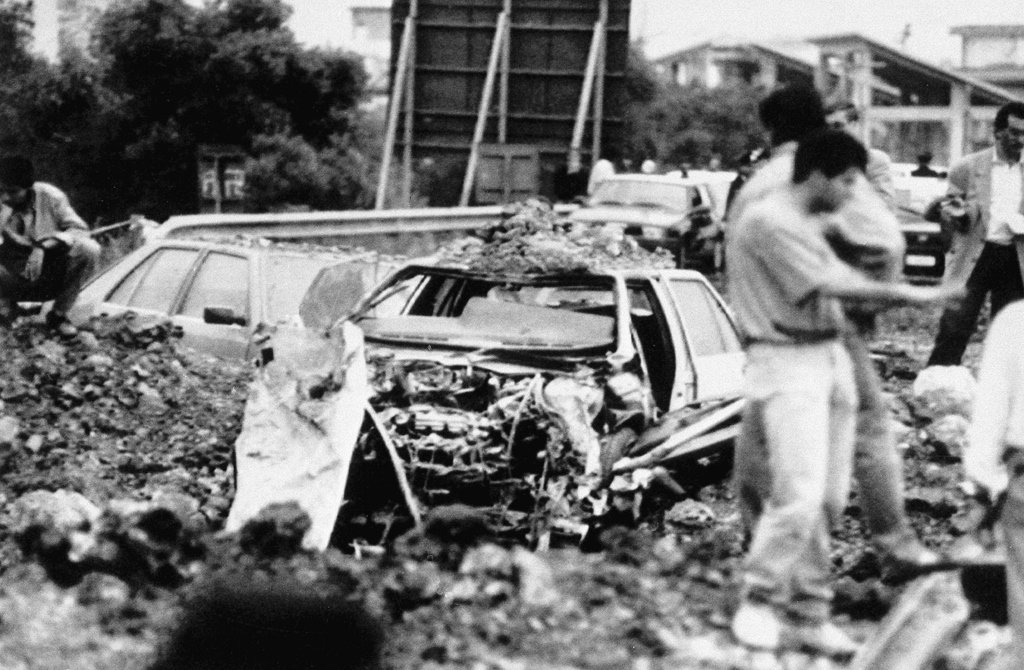 A Sicilian court has shone a light into one of the darkest episodes in Italy’s long and bloody fight against the Mafia, ruling that politicians and police encouraged a string of murderous car bomb attacks by negotiating with mobsters.

The unexpected verdict last Friday after a five-year trial sent reverberations through the country, even throwing an obstacle into stuttering negotiations to form a new Italian government seven weeks after an inconclusive election.

Judges sentenced seven people — a close associate of former Prime Minister Silvio Berlusconi, three senior Carabinieri police officers and three mafiosi — to long jail terms for damaging the state through their negotiations in 1992-1994, during and after a Mafia car bomb campaign that killed 23 people.

The verdict was greeted by clapping and cheering in a fortified Palermo courtroom built specially for Mafia trials.

The dead included Italy’s greatest modern heroes, anti-Mafia magistrates Giovanni Falcone and Paolo Borsellino, who were blown up in May and July 1992.

The prosecution case, upheld by the judges, was that the state, through Carabinieri officers and a senior Berlusconi aide, Marcello Dell’Utri, succumbed to blackmail to end the devastating bombing campaign in exchange for negotiations to alleviate harsh prison conditions for convicted gangsters.

Prosecutors said the collusion reinforced the Mafia’s “massacre strategy” instead of discouraging it.

Berlusconi, 81, who is trying to win a place for his Forza Italia party in the next government, expressed outrage at prosecutors’ allegations that his first administration in 1994 negotiated with the Mafia through Dell’Utri.

The verdict could damage Berlusconi.

But the verdict is likely to hurt Berlusconi and has increased the determination of the populist Five Star Movement (M5S), which took the most votes in March, to reject any governing alliance with the billionaire media magnate.

The negotiations began after Falcone, Italy’s most successful anti-Mafia fighter, was blown up with his wife and three-man escort on his way into Palermo from the airport in May 1992. The huge bomb tore up a long stretch of motorway and shocked the nation.

Two months later, Falcone’s friend Borsellino was killed outside his mother’s Palermo apartment by another car bomb, which also killed his escort of four men and one woman. Sicilian campaigners, including Borsellino’s brother, say he was killed because he had discovered the negotiations and was about to denounce them.

The outcry after those atrocities led to the arrest six months later of the boss of bosses, Toto “the Beast” Riina, instigator of the bombing campaign. But negotiations continued after the Mafia struck on the mainland, killing 10 people and wounding dozens in bombings in Florence, Milan and Rome. The attacks then stopped abruptly. The prison regime for 300 mafiosi was later alleviated.

Palermo prosecutors hope the case will draw a line under more than a century of collusion between mafiosi and powerful politicians that has frequently crippled the struggle against the criminal society and put investigators in mortal danger.

One of those convicted was distinguished Carabiniere General Mario Mori, a leading light in the fight against both urban terrorism and the Mafia, who headed the successful hunt for Riina.

General Carlo Alberto Dalla Chiesa, Mori’s former boss who led the successful campaign against the Red Brigades, was murdered with his wife and driver in Palermo in 1982 after being sent to fight the Mafia but then isolated by senior politicians.

Official collusion is also believed to have tipped off the Mafia to the movements of Giovanni Falcone, facilitating his assassination.

Mori and other police denied negotiating with gangsters, saying their contacts were part of the hunt for Riina.

Despite its impact, the verdict left one of Italy’s most enduring mysteries unsolved. Borsellino carried a red diary in which he recorded his investigations, and this disappeared from his car after the fatal bombing.

A photo discovered a decade later showed a Carabiniere officer walking away with a briefcase containing the diary, which has never been found. Salvatore accuses the Italian secret service of involvement in the murder and disappearance of the diary.

In the crowd applauding the verdict in court were people waving red diaries, part of a movement set up a decade ago by Salvatore that marks the anniversary of the bombing every year.

Triumphant prosecutors, who live their life under constant escort, hailed the verdict as historic.

But under Italy’s tortuous legal system, none of those convicted will serve their sentences until the conclusion of two appeal trials, which could take years and may overturn the court’s decision — so often the case in the heart-breaking struggle to defeat Sicily’s criminal society and its links with politicians.