Saudi-led intervention in Yemen’s civil war, now in its third year, has provoked a humanitarian catastrophe. The U.S. and Britain are making it worse. 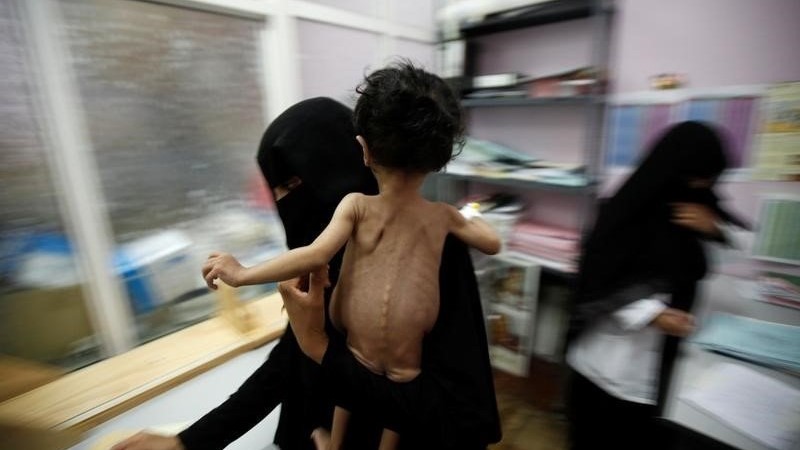 A woman holds her boy after he was weighed at a hospital malnutrition intensive care unit in Sanaa, Yemen, 27 September 2016. (REUTERS/Khaled Abdullah)

Saudi-led intervention in Yemen’s civil war, now in its third year, has provoked what is currently the world’s gravest humanitarian catastrophe.

The United States and Britain are making it worse.

The two Western powers directly support a Saudi bombing campaign that has devastated much of Yemen, already the poorest Arab nation, since it began in March 2015.

They are meddling in a tangled internal conflict that pits the northern Houthi militia and loyalists of former President Ali Abdullah Saleh against disparate forces under the banner of Saudi-backed President Abd-Rabbu Mansour Hadi.

Iran favors the Houthis, who belong to a sect of Shi’ite Islam. Saudi Arabia frames the war as a vital mission to stem alleged Iranian expansionary ambitions in its neighbor.

The regional Saudi-Iranian power struggle has spread to Yemen, infecting its once-tolerant people with the sectarian poison that sets Sunnis against Shi’ites.

For U.S. President Donald Trump, Iran is the overarching demon, along with “radical Islam.” He appears to view Yemen as a place to combat both.

Western governments had long seen Saudi fears of Iranian inroads in Yemen as greatly overblown. But when the kingdom began bombing two years ago, the United States, Britain, France and others backed a one-sided U.N. Security Council resolution that endorsed Saudi war aims.

Their apparent motives were to assuage Saudi wrath over an international nuclear deal with Iran and to shore up lucrative arms sales. But their policy of clinging to the fiction that Hadi could ever be a credible president for all Yemenis and discounting all his opponents sealed Yemen’s doom.

U.S.- and British-supplied munitions have since hit schools, hospitals, water and sewage treatment plants, factories and ports. A blockade by Saudi Arabia and its Gulf allies has piled on more misery in a country of 27 million that used to import 90 percent of its food.

Famine looms as Yemen disintegrates. The United Nations says seven million Yemenis are moving “ever closer to starvation” and 10 million more are going hungry. Over two million children are acutely malnourished, a condition that exacts permanent damage on small bodies and minds — if they survive.

U.N. and other international relief agencies are doing their best but are often denied access by the warring parties and lack the resources to tackle suffering on this scale.

Those agencies rely heavily on Western funding, particularly from the United States, but Trump is proposing to slash allocations for foreign aid in a budget that would greatly swell military spending.

At the same time, he is deepening U.S. military involvement, approving more drone and other air strikes on al-Qaeda targets in Yemen during his few weeks in power than former President Barack Obama did in a year, and loosening rules of engagement designed to prevent civilian casualties.

Trump authorized a failed attack by a U.S. Navy SEAL team on the village of al-Ghayil on January 29 which met stiff resistance. The firefight killed around 30 people, including six women and 10 children aged under 13, as well as one of the SEALs.

The White House said the operation had gathered unspecified intelligence, denying reports that its real target was Qasim al-Raymi, leader of Al Qaeda in the Arabian Peninsula (AQAP), who later mocked Trump over the debacle.

For years the United States, Britain and their allies have worried about AQAP and its known ambitions to strike targets in the West. But such raids, which arouse intense local hostility, are no more likely to weaken the organization than Obama’s more limited drone strike campaign.

For AQAP has prospered in the chaos of civil war, none of whose main protagonists see the group as their principal enemy, the International Crisis Group argued in a report last month.

The Sunni fighters in AQAP’s Ansar al-Sharia militia have embedded themselves among Saudi-backed forces fighting the Houthis. At least some of the tribesmen who fought the U.S. Seals in al-Ghayil, in al-Bayda province, were linked to al-Qaeda by conviction or family ties.

But they were also fierce foes of the Houthis, who had invaded their territory, according to Iona Craig writing for The Intercept, an online magazine, and were thus fighting on the same side as the Americans in the civil war.

Abdul-Raouf al-Dhahab, a tribal leader killed in the raid, had helped organize this resistance with Saudi funding, Craig reports. His sister was married to Anwar al-Awlaki, an American citizen and al-Qaeda propagandist killed in a drone strike in 2011. Their eight-year-old daughter died in the attack on al-Ghayil.

Are the Saudis “in over their necks”?

For all its money and firepower, the Western-backed Gulf coalition has failed to dislodge the Houthis from the capital Sanaa or to reinstate Hadi, the president they ousted. After two years, the civilian toll exceeds 10,000 killed and 40,000 wounded, most of them by Saudi air strikes.

U.N. and other human rights groups view some of these as possible war crimes.

Alarmed by one such atrocity, the Saudi bombing of a funeral in Sanaa that killed 140 people in October, Obama suspended a planned $390 million sale to Riyadh of precision-guided munitions. Trump may now reverse that decision.

Some U.S. and British politicians are queasy about the role their countries are playing in Yemen.

Andrew Mitchell, a British Conservative parliamentarian who visited Yemen recently, told a London audience this month the Saudis were “in over their necks” and could not triumph.

He acknowledged the contradictions of Britain’s policy of backing the Saudi-led coalition while taxpayers stumped up aid money to alleviate the civilian suffering it was inflicting.
Yet Mitchell stopped short of advocating an arms embargo on Riyadh, saying this would endanger jobs in Britain and allow rival suppliers to move in.

“Blood on its hands”

Chris Murphy, a U.S. Democratic senator, has declared that the United States, via its support for the coalition, has blood on its hands in Yemen.

But Trump, who had lunch at the White House last week with the architect of the Yemen war, Saudi Deputy Crown Prince and Defence Minister Mohammed bin Salman, has shown no such qualms.

The Saudis have been thrilled by Trump’s tough talk against Iran and his willingness to intensify military action in Yemen.

The kingdom may lure Trump deeper into its own Yemeni quagmire, but this will only prolong the the war, heighten the risk of full-scale famine and play into the hands of AQAP.