The rich are getting richer. How can we reduce inequality?

The gap between rich and poor in many nations is widening. But stock markets are not the culprit. Here’s what can be done to curb economic inequality. 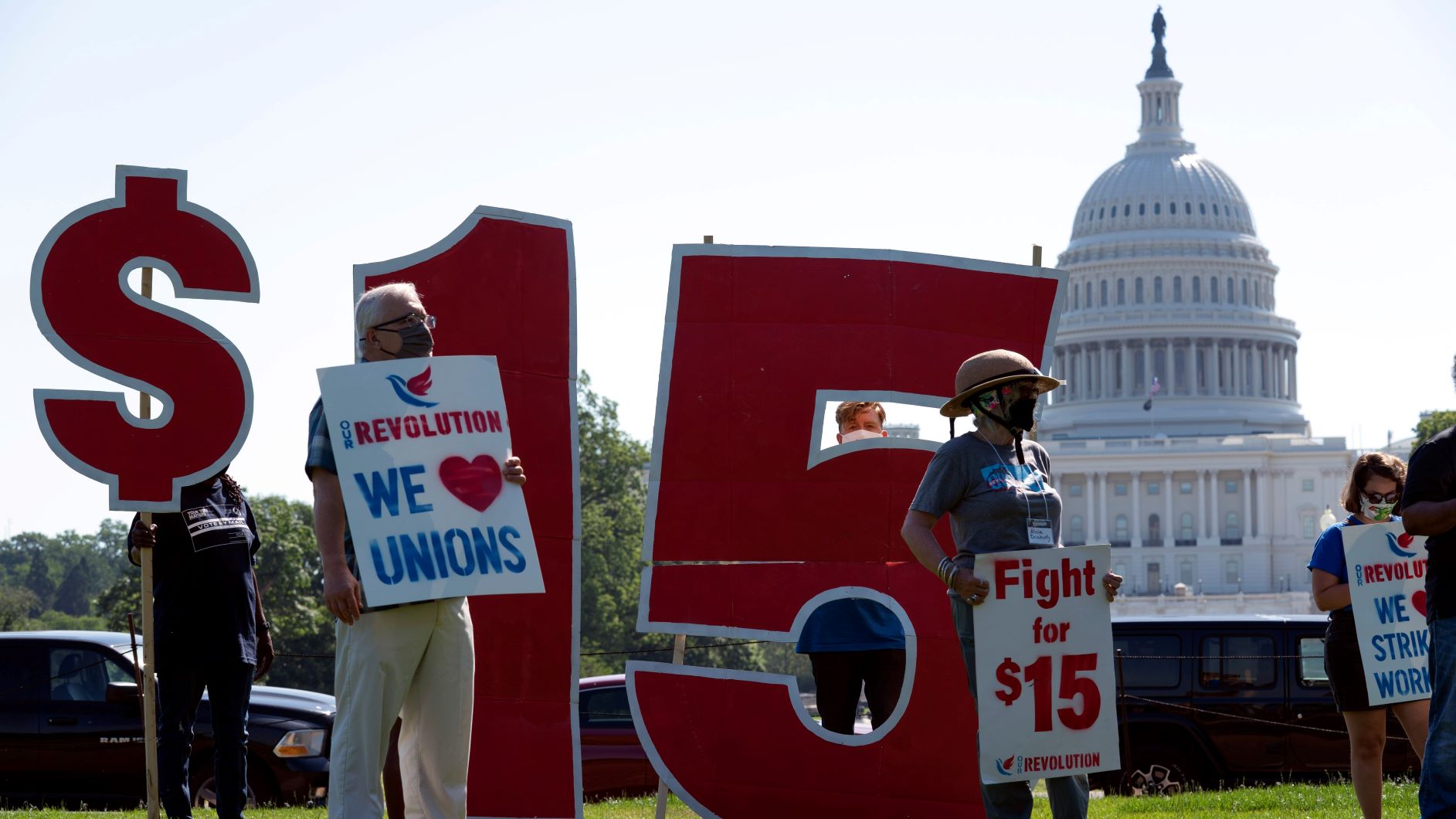 Demonstrators call for a $15 per hour minimum wage in the United States, Washington, DC, 19 May 2021. (AP Photo/Jose Luis Magana)

Anger over inequality is rising, especially among young people, who resent watching prices of shares and property scale new heights even as COVID-19 disrupts their education and potentially sets back their career prospects.

They are right to be angry. They are also right to want more tax justice and a fairer distribution of income and wealth.

But they are wrong to take narrow aim at the stock market.

Yes, Wall Street is trading at record highs (and U.S. house prices surged 14.6% in the 12 months to April, the biggest rise in 30 years) even though Western economies still face a long recovery from the epidemic.

But asset prices are sky-high for a simple reason: central banks have slashed interest rates to zero and created unfathomable amounts of money to get through the crisis.

At the same time, governments have turned the spending taps full on to support laid-off workers, keep businesses afloat and finance the post-COVID recovery – most strikingly in the United States.

Capitalist economies don’t have a monopoly on inequality.

With plenty of almost-free money sloshing around, it’s no wonder that stock markets have been galloping ahead.

But here’s a thought experiment. If the United States still has 10 million fewer jobs than it did before the pandemic, how many more millions would be unemployed if policymakers had repeated the mistakes of the Great Depression of the 1930s and failed to do whatever it takes to support the economy?

Yes, the rich are getting richer as stock prices climb. But many ordinary people are doing better too – even if it doesn’t feel that way – because a chunk of their pension savings is invested in equities.

As I argued in a previous News Decoder column, a young person who can afford it shouldn’t pass up the chance to invest in company shares. Over the long run, equities offer much better returns than any other asset.

It’s worth noting, too, that capitalist economies do not have a monopoly on inequality.

Take China, where people have only a small part of their wealth tied up in equities. Inequality has been rising at an alarming rate. While Greater China by one estimate is now home to more billionaires than the United States, Premier Li Keqiang has disclosed that 600 million Chinese, or 40% of the population, are living on just $140 a month.

The rich have benefited from rising stock prices while labour’s share of income has dropped.

Buoyant stock markets, then, are better viewed as a symptom rather than a cause of rising inequality. They reflect the fact that for more than four decades, the owners of capital have grabbed an increasing share of the economic pie at the expense of workers.

There are many reasons for the fall in what economists call the labour share of income.

Computers have replaced workers in many industries, reducing their bargaining power. Dwindling trade union membership has had the same effect. Inadequate education and training, resulting in poor skills, are also to blame.

But the most important cause is probably globalisation.

The decline in the labour share of income has coincided with the emergence of China onto the world economic stage, as well as India and the formerly communist states of eastern Europe.

The hollowing out of well-paid jobs in traditional industries in the West at the hands of technology has been hastened by the exodus of mass manufacturing to China.

It is no accident, then, that median hourly wages in the United States have risen only 15% over the past 40 years. Productivity has grown much faster; the rewards have gone to the owners of capital.

Meanwhile, profitability and mark-ups have been rising in many countries as the number of competing firms has shrunk across a swathe of sectors. Market concentration in the U.S. economy, in particular, has increased due to a wave of mergers and lax antitrust enforcement.

Once again, technology has amplified the underlying trend. Asset-light tech giants enjoying near monopolies, such as Google and Facebook, reap immense profits but employ few people.

Some bright signs for pro-equality campaigners

So, what is to be done to tilt the scales back in favour of labour?

Jim O’Neill, chairman of Chatham House, a leading UK think tank, strongly advocates a fairer distribution of income. He is critical of company bosses who, instead of reinvesting profits, use the money to buy back shares. That increases earnings per share (EPS), a key determinant of executive bonuses.

Decrying what he calls the “utter obsession with EPS management,” O’Neill said policymakers should consider linking approval of share buybacks to evidence that companies are being socially useful, for example by increasing productivity.

And executive bonuses should be subject to longer lock-up periods and tied to a socially productive goal, not earnings per share.

“There’s nothing wrong with genuine risk takers being highly rewarded, but the system as it has evolved is essentially rigged,” said O’Neill, a former head of Goldman Sachs Asset Management.

O’Neill also favours a higher minimum wage because it would encourage employers to step up investment, which has been woefully weak for the past two decades.

Many companies, including Amazon and Walmart, are in fact raising pay in response to post-pandemic bottlenecks in the labour market, while President Joe Biden has increased the U.S. federal minimum wage. These are not the only bright signs for pro-equality campaigners:

A recent investigation by ProPublica into how American billionaires, including Amazon boss Jeff Bezos and Tesla chief Elon Musk, avoid paying tax can only have increased the anger many people feel about income inequality.

Rightly so. But the response should be to press for fundamental reform of the tax system and measures that would leave workers with more of the fruits of their labour.

Blaming the stock market for valuing companies so highly is a red herring.