The danger of pushing Putin into a corner

Russia’s economic woes seem to make it an easy target, but the West runs a risk in trying to paint Vladimir Putin into a corner. 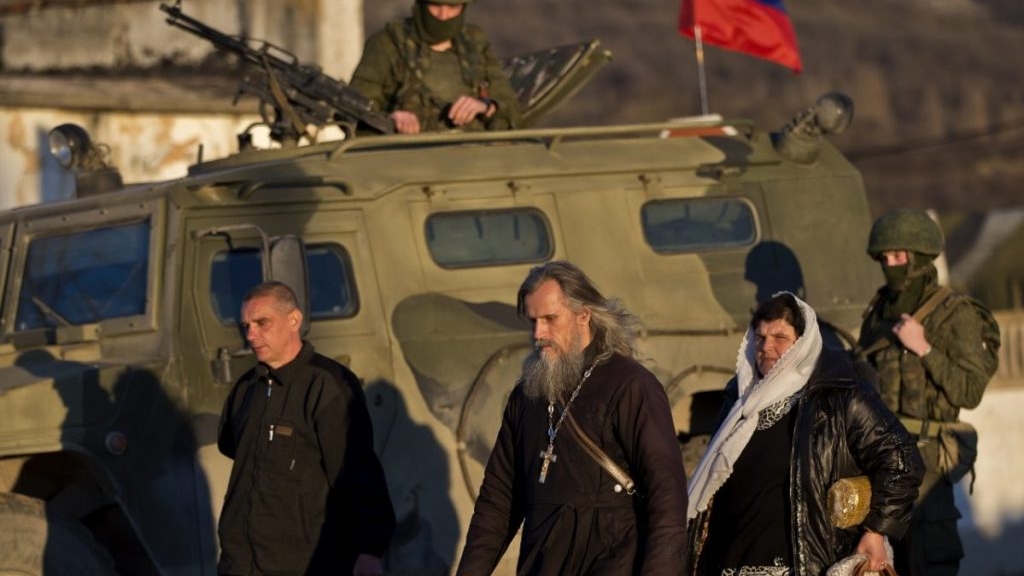 Archbishop Clement of the Ukrainian Orthodox Church walks past a pro-Russian armored vehicle and soldiers outside a Ukrainian military base in Perevalne, Ukraine, 15 March 2014. (AP Photo/Vadim Ghirda)

Falling oil prices and Western sanctions have eaten away at Russia’s economy, posing a challenge to Vladimir Putin’s once popular bid to reinstate Russian power through military adventures in Eastern Europe and the Middle East.

In the first month of 2016, oil prices fell below $30 a barrel, causing the ruble to weaken by as much as 12% against the U.S. dollar, while Russian manufacturing production sputtered.

Western leaders may well think they have reason to celebrate Russia’s troubles.

Russia’s enfeebled economic position, some say, could pressure Moscow to cooperate with the West on security issues in the Ukraine and Syria, as it has done in the past.

Russia’s currency fell more than 40 percent against the U.S. dollar between May and September of last year. In September, when Russian and Western negotiators met in Berlin to consolidate a ceasefire in Ukraine, the peace talks made “significant progress,” according to German Foreign Minister Frank-Walter Steinmeier.

The ruble is now at about 77 per dollar — about eight percent weaker than in September.

As Russia’s economic woes deepen, Putin is now showing willingness to meet with the United States to discuss peace in Syria.

But the West should be cautious of a Russia that feels backed into a corner. The economic crisis can fan the flames of nationalism as Russians struggle through hard times.

Putin relies on national pride to bolster his popularity. He excels at reinvigorating Russian nationalism in the face of economic adversity.

Since assuming office in 2000, Putin has encouraged the resurgence of the Russian Orthodox Church as a symbol of Russian tradition and identity.

The year 2010 was one of significant gains for the Church. The state returned property confiscated by the Soviets to the patriarchate and restored military chaplaincy.

Under Putin, the Orthodox Church plays a hand in government censorship of bands, art and speech deemed blasphemous.

Putin has used Eastern Orthodoxy as a foreign policy tool. After Russia annexed Crimea, Putin recalled that Orthodox Christianity had taken root in Crimea, establishing “the overall basis of the culture, civilization and human values that unite the peoples of Russia, Ukraine and Belarus.”

By placing Crimea at the heart of Russian identity, Putin inspires the Russian people with a cultural cause that can persevere through economic hardship.

The West accuses Putin of corruption and of conniving in murder.

The Church is not the only facet of Russian identity to which Putin can turn. Due to sanctions and recession, Russians have been unable to purchase foreign goods, so they are turning to traditional food.

Putin has said he hopes all food will be produced domestically by 2020.

Economic isolation has awoken an incipient nationalism that strengthens Putin’s hand. If he employs the political cunning for which he has gained a reputation, he could turn an economically struggling Russia into a Russia prepared to lash out against external competitors.

While the United States has expressed optimism about negotiations in Ukraine, Western governments continue a war of words with Russia. Last month, for the first time, the U.S. Treasury accused Putin of corruption.

A few days earlier, a British government inquiry found that Putin “probably” authorized the poisoning of a former KGB spy, Alexander Litvinenko, who died in London in 2006.

Has the West gone too far in exploiting Russia’s economic weakness?

Putin’s response — demanding evidence of corruption and warning that relations between Britain and Russia will suffer — begs the question of whether the West has gone too far in taking advantage of Russian misfortune.

Many in the West might see Russia’s economic troubles as an opportunity to squeeze Moscow. But there is the risk that strategy could yield undesired results by perpetuating nationalism and violence.

Russia’s apparent vulnerability makes the nation a capricious adversary to Western ambitions. The West might want to think twice about celebrating Russian weakness while ignoring the growing sense of Russian identity. Unpredictability can be as dangerous as established power.

The views are the author’s.

Maggie Boudreau is a high school student from Wilton, Connecticut. After spending three years learning Russian and a summer in Saint Petersburg, she was inspired to begin a yearlong research project on the global implications of the rise of the Orthodox Church in Russia. She enjoys distance running and hiking.