Terrorism is spreading around the world. Can it be halted?

Fewer people are being killed by terrorism. But more countries are being hit, and more and more people consider violence against civilians justifiable. 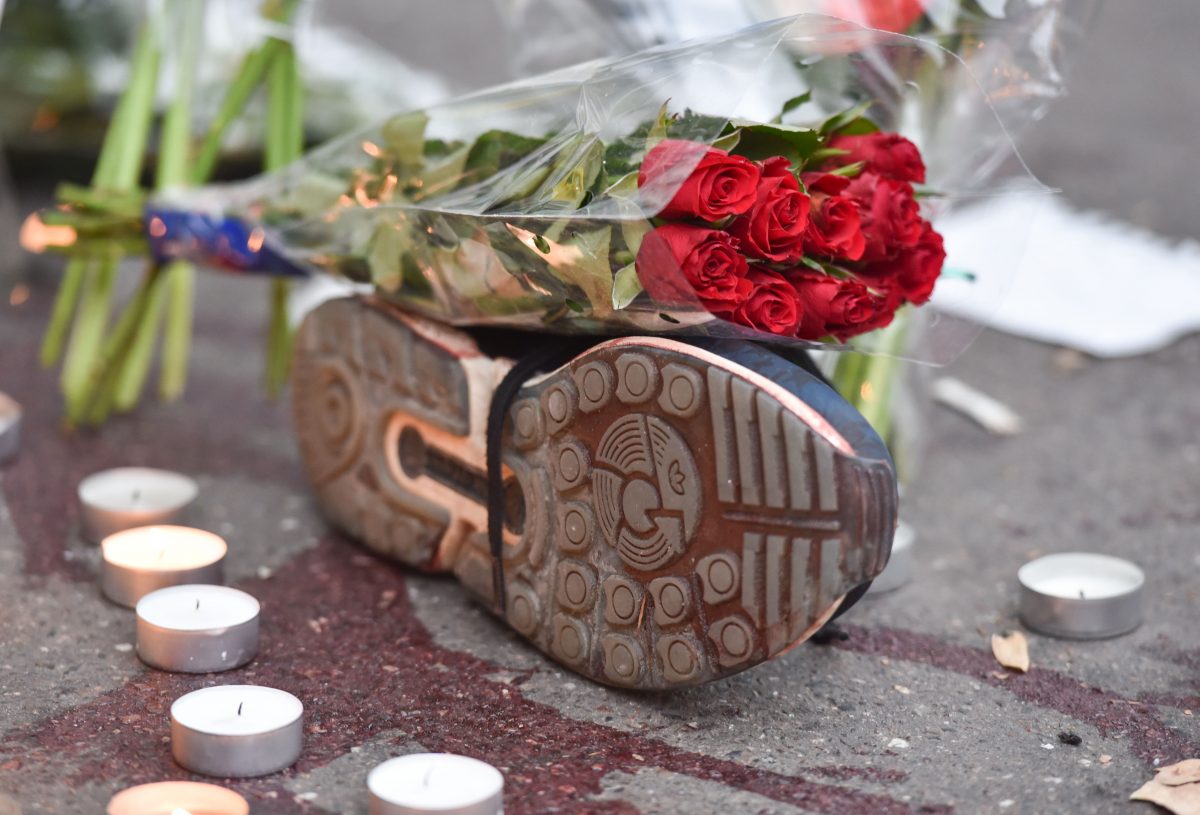 Roses on a sports shoe, next to a trail of blood, outside a music club in Paris, France, where 90 people were killed in a terrorist attack, 14 November 2015 (Uwe Anspach/picture-alliance/dpa/AP Images)

There is good news about the fight against terrorism, there is bad news and there is worse news.

The good news: Over the past few years, there has been a decline in the number of people killed in terrorist attacks around the world.

The bad news: The number of countries that have suffered terrorist attacks from one group or another has increased steadily and now stands at 106.

The worst news: A growing number of people consider attacks on civilians in pursuit of a political cause to be acceptable.

Before delving into statistics, a word of caution: There is no universally accepted definition of who is a terrorist, which explains the often-used adage that “one man’s terrorist is another man’s freedom fighter.”

The late Walter Laqueur, an eminent scholar of terrorism, described it as “the illegitimate use of force to achieve a political objective by targeting innocent people.”

The University of Maryland’s Global Terrorism Database defines terrorism as “the threatened or actual use of illegal force and violence by a non-state actor to attain a political, economic, religious, or social goal through fear, coercion, or intimidation.”

Millions more find it acceptable to use violence toward civilians.

The good news/bad news findings are drawn from two of the world’s most comprehensive databases on terrorism, one in Australia (the Global Terrorism Index) and the other in the United States (the University of Maryland’s Global Terrorism Database). Their numbers differ but they coincide on an overall trend – terrorism has spread geographically to more countries than ever before.

The findings on growing acceptance of political violence around the world stem from polling data from 64 countries crunched by ORB Media, a Washington-based news and analysis organization. According to the polls, such views are held in rich and poor countries alike.

In percentage terms, the increased proportion of citizens who consider violence against civilians to be justifiable does not look spectacular. According to ORB Media data comparing two periods (2002-09 and 2012-18), the proportion rose from five to nine percent in the Middle East, 12 to 14 percent in sub-Saharan Africa, three to five percent in Europe and Central Asia.

But in absolute numbers, this means that over the past decade, millions more people now find it acceptable for non-state groups to use violence toward civilians.

The seemingly relentless spread of terrorist acts happened despite trillions of dollars spent by the United States and Western allies on bombing terrorist strongholds, special forces raids, stepped up surveillance, drone strikes, tightened security at borders and air and seaports – all complemented by a variety of campaigns exhorting the public to be vigilant.

A lack of a global consensus on what works best

How to stop recruitment is perhaps the most difficult problem facing governments and civil organizations devoted to preventing acts of terrorism. The problems are manifold. For years, governments paid relatively little attention to the spread of extremist propaganda on social media.

According to the Stimson Center, a U.S. think tank, just a tiny fraction of the $2.8 billion the American government spent on fighting terrorism from 2002 to 2016 went towards prevention.

Now, under growing pressure from the U.S. Congress and European regulators, social media platforms have begun cracking down on “hate” content, from jihadi groups to conspiracy theorists, neo-Nazis and White Supremacists.

Facebook, the biggest platform of them all with 2.3 billion users, is using artificial intelligence and language algorithms to remove terrorist content. It says it eliminated more than 14 million such postings in 2018.

But that technology works best in English, a language roughly half of its users do not speak. “That’s a huge problem,” Mike Schroepfer, Facebook’s Chief Technology Offer, told a recent developers conference.

One major obstacle to progress on preventing acts of extreme violence is a lack of a global consensus on what works best. There is no world-wide database on counter-terrorism strategies and their effectiveness, partly because there is no consensus on who is a terrorist.

That is often in the eye of the beholder and subject to change according to politics. In the case of the United States, it is easier to get on the terrorist blacklist than off it. Take the case of the late Nelson Mandela, South Africa’s first post-apartheid president and one of the great statesmen of our time.

He stayed on the U.S. terrorist blacklist for 15 years after winning the 1993 Nobel Peace Prize for his role in his country’s peaceful transition to majority rule. Mandela was removed from the list after then President George W. Bush signed a bill that took the label “terrorist” off members of the African National Council, the group that used sabotage, bombing and armed attacks against the white minority regime.

The European Union in November proposed new rules to counter propaganda and curb recruiting that would impose stiff fines on internet service providers that fail to remove terror-related posts and videos within an hour after being alerted by national authorities. Failure to comply: up to four percent of annual turnover.

For Google, that would amount to $4 billion.

The move is now being considered by the European Parliament and the EU Council. Reaction from the internet giants has been mixed, and the adoption of the proposal is far from certain.

The outlook for the future is not bright, despite military gains in the fight against major groups such as Islamic State, al-Qaeda and Boko Haram.

As the U.S. Department of Justice has put it: “As long as extremist groups continue to produce compelling propaganda that plays a part in inspiring and inciting individuals to violence — and remains easily accessible online — terrorism in the name of these extremist groups will remain a threat worldwide.”