The U.S. strike against Syria has drawn Washington deeper into a messy conflict and set back ties with Russia. But a military escalation is not sure. 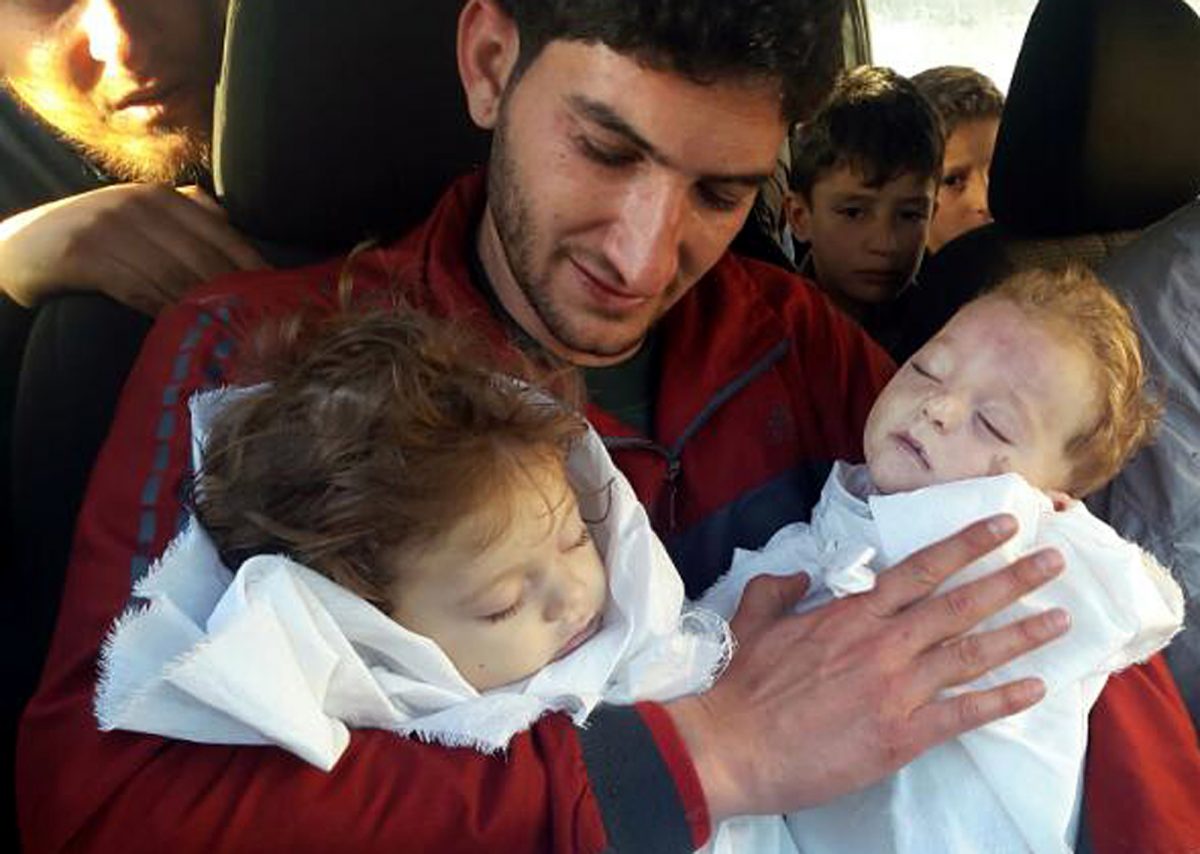 Abdul-Hamid Alyousef holds his twin babies who were killed during a suspected chemical weapons attack, in Khan Sheikhoun in the northern province of Idlib, Syria. Alyousef also lost his wife, two brothers and other family members. 4 April 2017 (Alaa Alyousef via AP)

The United States fired dozens of cruise missiles at a Syrian airbase last week after accusing government forces of launching a nerve gas attack on a rebel-held town that killed 87 people including 31 children. Below, News-Decoder correspondent Rashad Mammadov examines the significance of the U.S. move and its impact on Washington’s relations with Moscow, which backs Syrian leader Bashar al-Assad.

Let’s look at the situation from the official standpoint. The U.S. missile strike against Syria’s al Shayrat airfield was a limited use of force in response to the alleged use of chemical weapons against civilians in Idlib province, a Syrian opposition stronghold.

The use of such a weapon of mass destruction, especially against civilians, is a war crime. Yet despite U.S. President Donald Trump’s rhetoric, it is still not entirely clear if forces controlled by Syrian leader Bashar al-Assad launched the attack.

From a political standpoint, regardless of the United States’ true intentions, the missile strike accomplished quite a lot.

Although the actual damage from the strike was limited, it carried potent symbolism. Trump affirmed the famous “red line” drawn by former President Barack Obama, who in 2012 said any attempt by Syria to move or use chemical weapons would change his administration’s “calculus” in the region, evoking the possibility of more direct U.S. intervention in the conflict.

However, a year later when Assad’s army killed more than 1,400 people with sarin gas, the U.S. did not intervene.

So after a long period of uncertainty during the presidential campaign about the role of the United States in the region, the strike has pulled the country back in as a major player.

What is more, this was the first use of military force by a president who built his campaign around a promise to focus on the country’s internal problems.

Nothing points to ground operations by U.S. forces.

But what about Russia?

Russia was informed ahead of the missile strike. The official explanation is that Washington alerted Moscow to avoid misinterpretation and escalation. But one cannot help but ask if it allowed Syrians to evacuate most of the the base ahead of the missiles.

Was that the reason there were few human casualties? No Russian “advisers” were hit, despite intelligence reports that Assad’s air force is coordinated by the Russian instructors.

The strike itself was an example of professionalism. The speed of the decision-making – the missiles were launched less than 48 hours after the chemical attack on Idlib — suggests it was a spontaneous operation. The best explanation that comes to mind is that Donald Trump was moved by the images of dying children and ordered the strike.

Whether the motivation was revenge, an attempt to prevent possible future attacks or taking advantage of an opportunity for a forceful U.S. return to the region, we might never know. But unless Russia and Iran are willing to escalate, no retaliation is expected.

Nothing points to ground operations or even more airstrikes by U.S. forces. While Washington’s allies in the region have expressed strong support for the missile strikes, the Western alliance does not support a proposal to establish a no-fly zone over Syria, an idea pushed by Turkey.

We are seeing an escalation of tension between the U.S. and Russia.

The missiles did, however, have an impact on U.S.-Russia relations. Whether intentionally or not, the United States struck Syria just days before a long-awaited visit by U.S. Secretary of State Rex Tillerson to Moscow. Although Russian media predicted Tillerson would cancel his visit, he did not. But it is clear he will be asking Moscow to break ties with Assad.

Given what we know about Russian President Vladimir Putin and his aversion to muscle-flexing by adversaries, it’s hard to anticipate that he would acquiesce to the U.S. demand or promote a warming of U.S.-Russian relations.

Quite the contrary: we are already seeing an escalation of tension in Syria. Russia has suspended a memorandum with the United States that prevented mid-air collisions over Syria. The channel that the U.S. military used to inform Russians about the strike fell under the agreement that has now been suspended.

Russian Prime Minister Dmitry Medvedev even said the U.S. military action in Syria put Moscow and Washington “on the verge of a military clash.” We will probably see another wave of Russian arms pouring into Syria to strengthen Assad’s supporters.

Moscow is disturbed and disappointed by Trump’s demonstration of power, especially as it followed close on the heels of very different signals from the new U.S. administration. Just days before the strike, U.S. officials said removing Assad from power — a sine qua non for the Western alliance for years — was no longer a priority.

Those comments, along with Trump’s generally accommodating comments towards Moscow before and even after his election, had raised the prospect of a new Russia-U.S. counter-terrorist alliance.

Putin may have to swallow his pride.

Now, relations have returned to the spirit of confrontation that characterized the Obama era. Impulsive and emotional Donald Trump has done what quiet and reasonable Obama avoided for many years: he has brought the two nuclear powers to the edge of military confrontation.

Putin cannot afford to look weak in the eyes of his own people. Constant appeals to the greatness and power of Russia constitute one of his few remaining strengths. He cannot easily tolerate open and effective missile strikes destroying a military base belonging to Russia’s ally in the region.

Just four years ago, Putin stood as a victorious diplomat who prevented a major escalation of the Syrian war by forcing Assad to destroy his country’s chemical weapons. But not this time.

Still, it is no longer 2013, and both Russia and the United States have changed. Russia’s economy can ill afford a new wave of sanctions, and Putin is well aware of the limits to fellow Russians’ trust and patience. He has so far refrained from commenting on the missile strike, probably as he weighs the pros and cons of a military escalation.

Despite the Kremlin’s aggressive military rhetoric, aimed mostly at the Russian public, Putin may have to swallow his pride, ignore this incident while Tillerson visits Moscow and remain for the time being in standby mode.