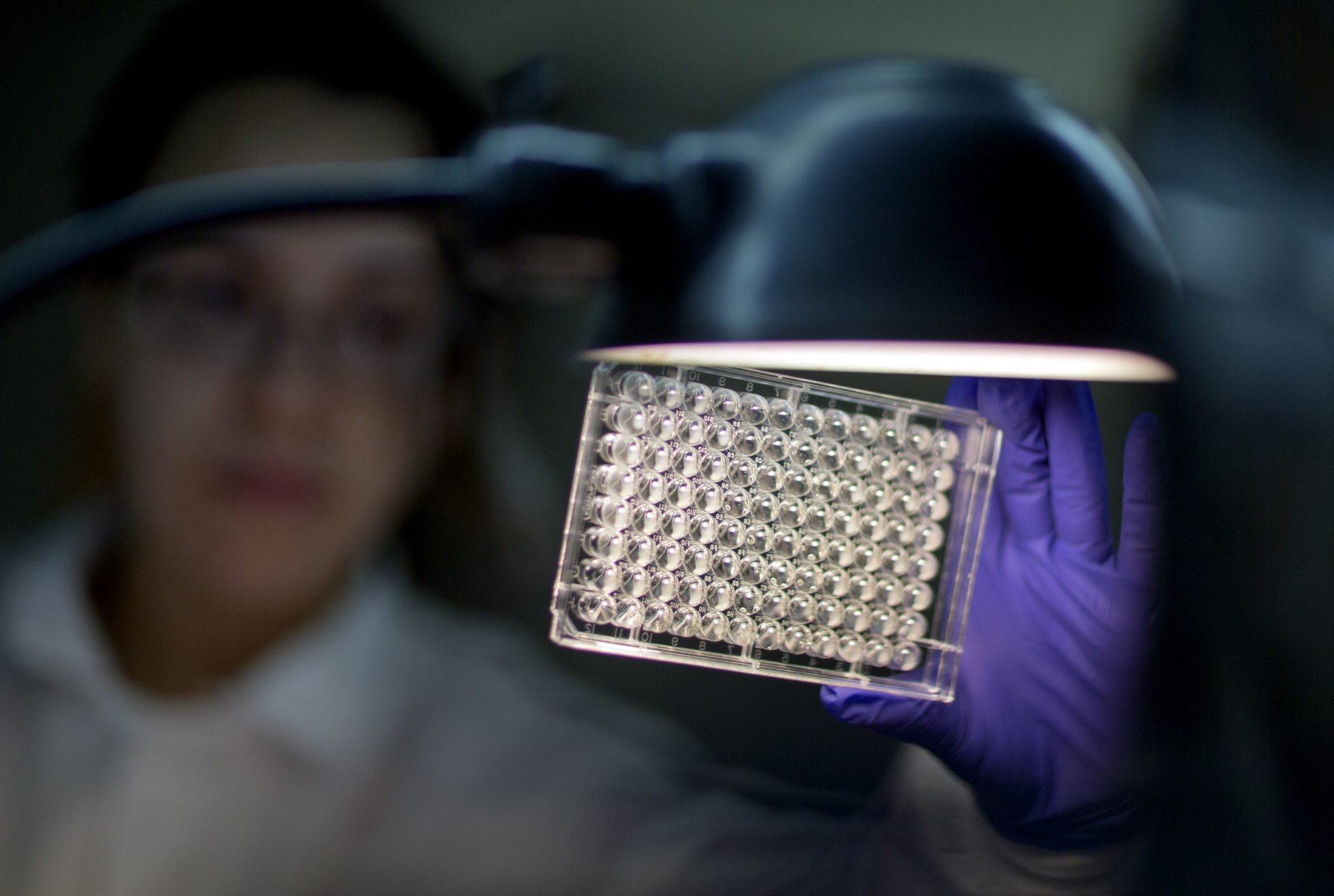 A microbiologist checks on a bacterium’s resistance to an antibiotic at the Centers for Disease Control and Prevention, Atlanta, Georgia, 25 November 2013 (AP Photo/David Goldman).
By Alan Wheatley

What could be killing millions of people a year by 2050? What could cost the global economy trillions of dollars in lost output by the middle of the century?

The answer is not climate change, but germs that evolve tricks to evade the effects of drugs used to treat them. It’s called antimicrobial resistance (AMR).

Some of the bacteria, viruses and fungi have developed so much resistance to drugs that they are called superbugs. The worst can shrug off every known drug in the arsenal, leaving doctors helpless to treat victims for infections as common as influenza.

An estimated 33,000 people die each year in Europe from infections due to bacteria that are resistant to antibiotics, according to a 2018 study by the European Centre for Disease Prevention and Control.

Drug-resistant bacterial infections kill 35,000 a year in the United States, and they killed 58,000 babies in a single year in India, according to World Health Organization, which has declared antimicrobial resistance a fundamental threat to the planet.

While there’s no global system for tracking infections due to antimicrobial resistance, a report prepared for the UK government in 2016 estimated that such infections were killing 700,000 people every year – and that without policies to stop their spread, the number could explode to 10 million each year.

One of the gravest medical threats facing humankind

Health authorities around the world have been screaming about the problem for more than a decade.

Jim O’Neill, the former Goldman Sachs economist who headed the UK government review of antimicrobial resistance, is frustrated that not enough is being done about what he sees as one of the gravest medical threats facing humankind.

The panel said deaths are set to soar unless we slash the use of unnecessary antibiotics, both in treating humans and in rearing livestock, and create incentives for pharmaceutical companies to develop new ones.

O’Neill says the battle against superbugs needs to take off like the campaign against climate change has thanks to activists such as Swedish teenager Greta Thunberg.

“Where is AMR’s Greta?” he asked in a commentary he wrote in December.

To complicate matters, there’s more than one type of superbug. There’s antibiotic resistance, and then there’s a broader issue of antimicrobial resistance, which refers to infections caused not only by bacteria, but by viruses, fungi and parasites.

The biggest threat by far is posed by antibiotic-resistant bacteria, which are caused by the overuse and misuse of antibiotics. Doctors often prescribe antibiotics for viral infections, even though they are useless against viruses. Farmers use them to fatten up livestock. People fail to take antibiotics appropriately.

The rise of drug-resistant bacteria can mean infections once cured with a quick course of pills will once again kill. Pneumonia could carry away children in a matter of days or even hours. Diarrheal infections could wipe out entire populations.

Cancer patients could die not from their cancer, but because there’s no way to treat infections they might contract because treatment suppresses the immune system. Simple surgery could become a huge risk, because infection could mean an automatic death sentence.

Then there are viral infections that resist treatment – think influenza and the AIDS virus HIV. Quickly evolving viruses such as HIV and flu can develop evasive manoeuvres after only a few people take antiviral drugs to treat them.

Finally, there’s malaria, which kills 435,000 people a year. Malaria is caused by parasites transmitted by mosquitoes, and these parasites also evolve resistance to the drugs used to kill them.

O’Neill’s commission recommended 29 interventions he estimated would cost $42 billion over a decade to avert the nightmare 2050 scenario. These include using fewer antibiotics in people and in animals; better tracking of deaths from drug-resistant organisms; and the development of new and better drugs.

Some progress is being made. A number of Western countries are using fewer antibiotics in farming in response to new regulations and consumer pressure. Denmark is a trailblazer here.

Importantly, China and India have both banned the use in agricultural feedstocks of an antibiotic called colistin, which is a critical last line of defence of humans against infections.

Promoting vaccines to prevent infections in the first place would reduce the superfluous use of antibiotics. And the availability of cheap diagnostic tests in doctors’ surgeries would swiftly show whether antibiotic prescriptions were necessary. Antibiotics are of no use against viruses, for example.

But Tim Jinks, head of the drug-resistant infections programme at Wellcome, a major medical research charity based in London, says science cannot solve the problem of AMR on its own. “We need to overhaul the economics to fix the broken antibiotic market,” Jinks said last year.

Back in 1980, there were 25 large pharmaceutical companies seriously engaged in developing antibiotics, Wellcome says. Now it’s mostly left to smaller start-ups to try to tweak older drugs or develop new ones. It doesn’t help that regulators agree that any new drugs would have to be kept in reserve for the most desperate cases – good medicine, but bad for business.

The fix that O’Neill advocates for this market failure is a “play or pay” mechanism. He would like to see a global body such as the WHO levy a charge of, say, 2% on all sales by pharma companies that are not developing antibiotics. The money raised would help fund a prize of $1 billion to $1.5 billion for each genuinely new antibiotic that meets a defined medical need. But no organisation, including WHO, has the power to exact such a tax.

O’Neill, who is harshly critical of pharma companies for their lack of enthusiasm for developing new antimicrobials, reckons more than $10 billion would be required to reward the developers of the range of new antibiotics required.

Mobilising political and public support for such an unorthodox programme will be tough. But O’Neill believes society can rise to the challenge: “The human and economic costs compel us to act: if we fail to do so, the brunt of these will be borne by our children and grandchildren, and felt most keenly in the poorest parts of the world.”