Schengen, and European unity, under threat

Waves of migrants and refugees are threatening one of Europe’s bedrock achievements — the Schengen Area.

Overwhelmed by the influx of foreigners fleeing conflict, poverty and human rights abuses, several European nations have erected temporary obstacles to free travel as they try to get a grip on the numbers.

That raises awkward questions about the future of the Schengen free-travel zone at the very time anti-EU parties are challenging the political status quo in many of the bloc’s 28 member states.

While the Schengen Area’s borders do not align perfectly with the EU’s, nor do those of the euro zone. And few doubt that the collapse of Schengen or the euro would deal a heavy blow to European unity — at a time of tension and strife in nearby regions including Ukraine, the Middle East and Africa.

Signed in the town in Luxembourg of the same name in 1985, Schengen is one of the continent’s major accomplishments since the push for European unity gathered pace following World War Two.

Imagine submitting to border checks every time you crossed a state line in the United States. That’s how it was in Europe before 1995, when the Schengen agreement took effect.

Like the euro, Schengen has been a game-changer in Europe — and it is arguably a lot more popular than the common currency, blamed by many for inflation and austerity.

Signed in the Luxembourgian town of Schengen in 1985, the Schengen agreement states that “internal borders may be crossed at any point without any checks on persons being carried out.”

The area now encompasses 26 countries: 22 EU members plus Iceland, Liechtenstein, Norway and Switzerland. EU members Britain, Ireland, Bulgaria, Croatia, Cyprus and Romania are not in Schengen, although the latter four countries are waiting in the wings. 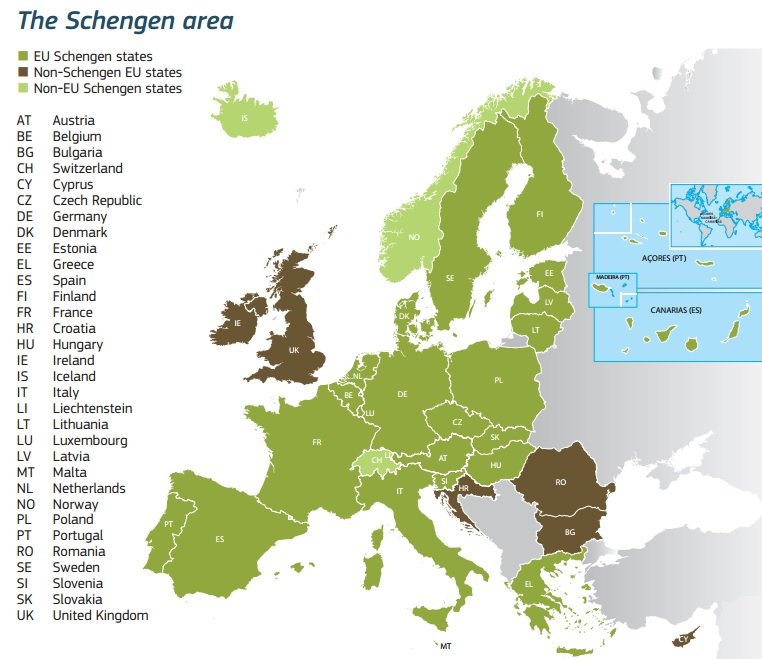 Schengen has supported Europe’s economy by allowing a smoother flow of people, goods and services, and by easing business travel and tourism. Europeans make over 1.25 billion trips within the Schengen Area every year, according to the European Commission.

Anyone who enters the Schengen Area, either at the border of a country on the outer rim or via an airport inside a Schengen member state, goes through immigration and customs. But once inside the area, a person can travel freely.

There can be exceptions. For example, border police can ask for ID at borders if, for example, they believe a criminal suspect might be leaving the country.

Schengen countries can close their borders in exceptional circumstances for up to 30 days, with a possibility of prolonging the period if the crisis endures. The EU Commission has to be informed.

Countries generally cite security reasons for such steps. Malta introduced checks during Pope Benedict’s visit in 2010, as did Estonia when it welcomed U.S. President Barack Obama in 2014.

More important for the refugees is whether they will win asylum.

In recent days, Austria, Germany, the Netherlands, Norway and Slovakia have all imposed various controls at their borders with other Schengen members.

Hungary’s decision to erect a fence along its border with Serbia has attracted media attention and criticism from some other EU member states, although Serbia is not in the Schengen Area.

Each country has been reacting to the arrival of hundreds of thousands of migrants and refugees from the Middle East, Africa and Asia, many of whom want to end up in Germany, which anticipates as many as 800,000 refugees to arrive this year.

An increasing number of migrants and refugees are entering Europe through Greece, then heading northward through the Balkans. Others try to reach Italy or Spain from North Africa.

Under an EU law called the Dublin Regulation, refugees must request asylum in the first EU country they enter. But countries on Schengen’s periphery, especially Greece and Hungary, have had difficulty coping with so many asylum seekers, and the system is starting to collapse.

More important for the refugees than procedures, however, is whether they will win asylum. EU leaders are discussing a proposal to share the burden of assimilating 120,000 asylum-seekers, but several countries in Eastern Europe have balked at quotas.

That, some say, is at odds with the push for European unity, which after recent threats to the euro now faces strains that are not likely to disappear soon.