Russians are keen for change but are not necessarily pinning their hopes on dissident Alexei Navalny as an alternative to Vladimir Putin. 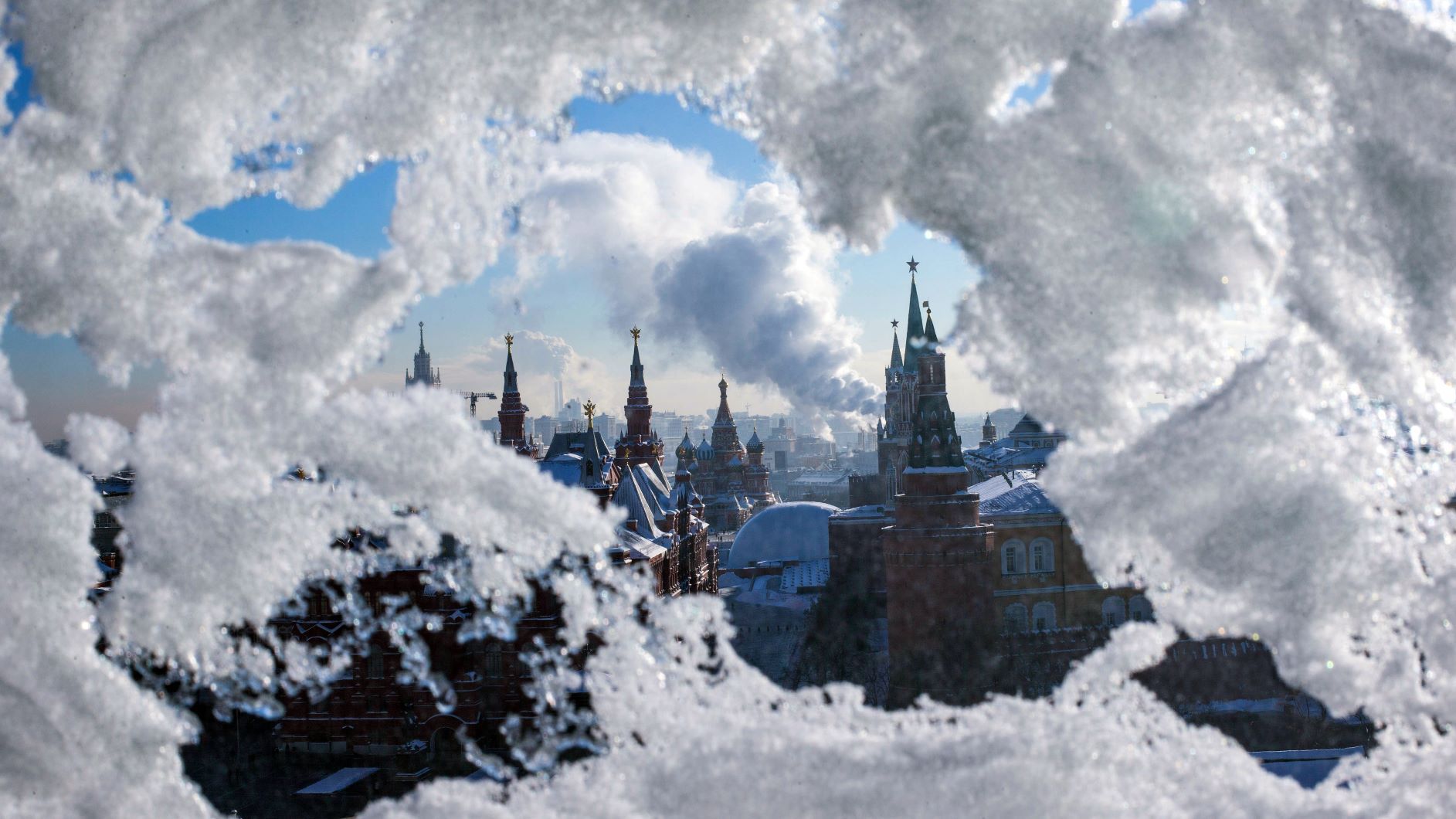 Tens of thousands of Russians have taken to the streets in recent weeks after anti-corruption fighter and opposition leader Alexei Navalny returned to Russia.

He had spent four months in Germany recovering from what he alleges was poisoning by a military-grade chemical agent on the instructions of President Vladimir Putin.

Polls indicate that although many Russians are fed up with economic conditions and want new leadership, Navalny may not be their leader of choice even if they object to his arrest and imprisonment.

When Navalny returned to Russia on January 17, he was arrested at customs control for violating the terms of his parole for an embezzlement case based on what he says were trumped-up charges. The next day he urged people to launch unsanctioned “Free Navalny” protests and then released a film called “Putin’s Palace. History of the World’s Largest Bribe,” charging the president with corruption.

Navalny versus Putin has been perceived in some parts of the world as the ultimate showdown, David versus Goliath. But is it? Navalny’s video has over 100 million views. But does that translate into a massive political force?

More Russians approved of Putin than Navalny in a recent poll.

Navalny’s original idea was to generate an ongoing wave of protests, but they were called off after two weekends. The high number of arrests — estimated at more than 11,000 by the OVD-Info non-governmental group — and a drop in the number of protesters may have inspired this shift in tactics.

Citizens in an impressive number of cities participated in the protests. There are no definitive estimates for the number of protestors, but opposition-oriented media estimated turnout over the first weekend at between 110,000 and 250,000, and between 65,000 and 200,00 over the second weekend.

Russia has a population of 148,000,000, so even the high-end estimate would hardly mark a fundamental shift in public opinion towards Navalny, who has been remanded to serve the remaining two years, eight months of his suspended sentence in jail.

Polling data published by the Levada Center — an independent, non-governmental polling and sociological research organization — provides a reality check and more evidence of a disconnect between on-line clicks and committed political engagement or support.

Asked “what politician do you trust,” 5% of the respondents said Navalny, ranking him sixth on the list, with a two percentage point increase since last November. Putin retained his top ranking with 29% trusting him, a drop of three percentage points. The reply, “I don’t believe any of them,” went from 19% to 21%.

Both Navalny and Putin suffered one percentage point decreases in approval numbers, with the opposition leader landing at 19% and the president with a 64% approval rating.

Main message at recent protests has been for change.

Local observers said that “Free Navalny” was not a unifying rally cry at the recent protests. Rather, the louder message was anti-Putin, anti-corruption and general dissatisfaction with what is happening in the country.

Another Levada poll asked 1,616 Russians, “What do you think prompted people to go to the protest?” Forty-three percent said “accumulated dissatisfaction with the state of affairs in the country.” Last among six reasons for protesting was support for Navalny’s activities, at 15%.

Many social media posts read, “I am not for Navalny but…”

The polling data and posts beg a question: Has Navalny hit a popularity ceiling, with people approving of his broader, anti-corruption, time-for-change message but uncomfortable with the messenger?

Some critics denounce what they consider the opaque nature of his policy positions. Some assume he favors free-market, neo-liberal economic policies — a hard-to-sell stance after the tragic devastation such policies brought to all but a tiny group in the 1990’s.

Others distrust Navalny’s dramatic transition from a gun-promoting, anti-immigrant, nationalist to a neo-liberal, democracy-promoting, Western hero. Another segment objects to his highly personalized, take-no-prisoners, zero-sum approach to politics.

Many view Navalny as divisive.

While in prison, Navalny is also on trial for calling a 95-year-old World War Two veteran a traitor for appearing in a video supporting constitutional changes that have allowed Putin to stay in office for another two terms. The war and its veterans are sacred territory for most Russians.

Even some of Navalny’s supporters question whether he has a winning strategy. One of those is Yuri Dud, the most popular internet journalist in Russia. During an interview with Nalavny and his wife when they were in Germany, Dud raised the temperament issue:

Dud: Are you sure throwing around such language and insults is the best …

Dud: But you see yourself as the future president of Russia. Is this really the level of minutia you wanna get involved with,… even now not being the president? It just seems such a triviality to start fisticuffs over, but you do it anyway.

Navalny: I use individual examples to discuss the whole system. Certainly it is one of my downsides…. I definitely get personal. It is part of my political strategy because I got into politics to criticize specific people, among other things. 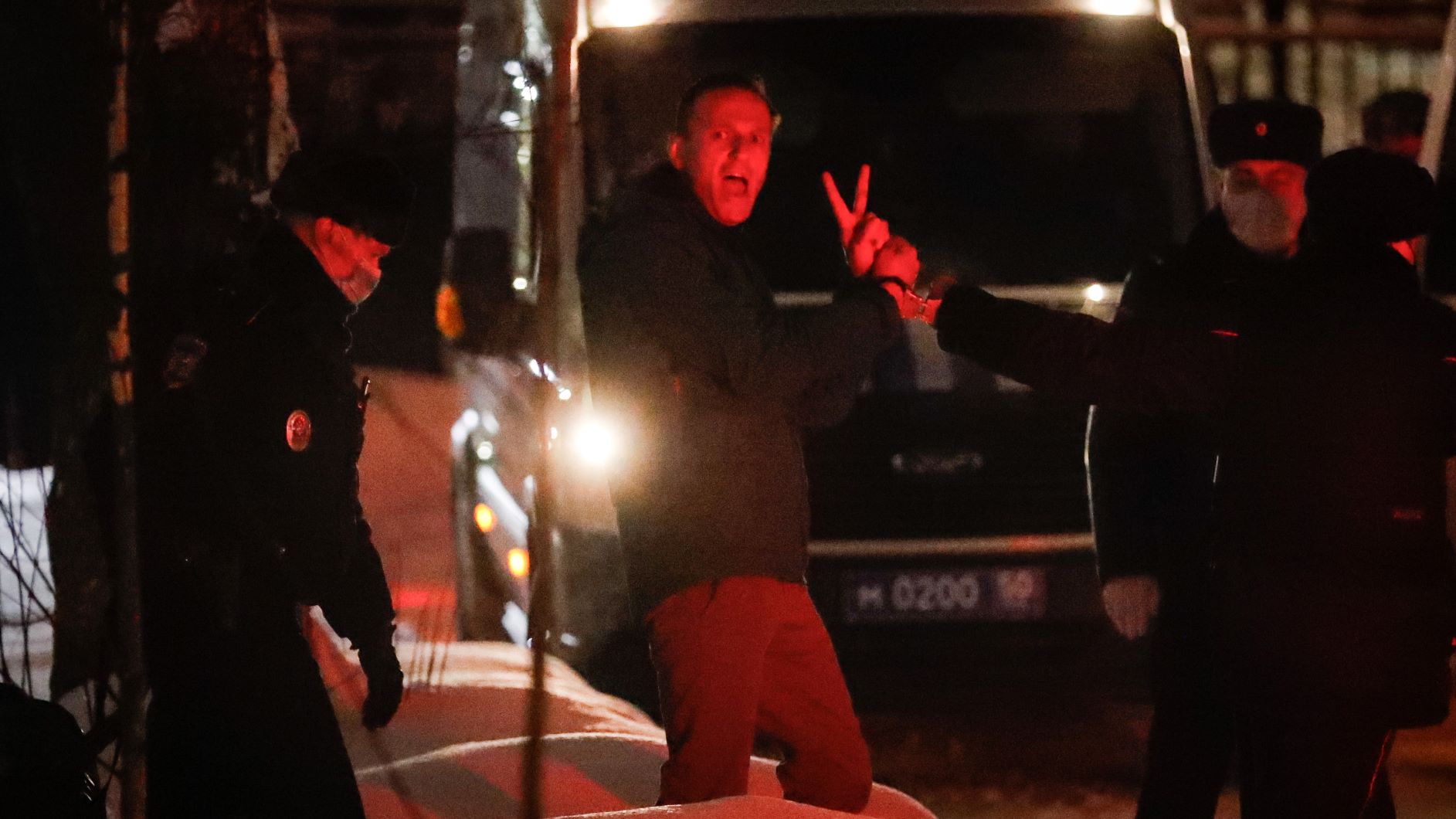 Alexei Navalny (C) is escorted out of a police station near Moscow, Russia, 18 January 2021. (EPA-EFE/SERGEI ILNITSKY)

Recalling a 2019 demonstration, Dud suggested Navalny could be more effective if he were less divisive. “Your entire speech was filled with aggression and hostility towards people who provide security,” Dud said.

“People at the assembly were ecstatic,” Dud said. “At some point the crowd shouted ‘Cops disgrace Russia.’ I thought to myself at the time, Alexei wouldn’t it have been better to come out and instead of saying something your followers expect to hear, address the people on the other side?… Shouldn’t you have tried to broaden your audience?”

Putin might be tempted to consider such reviews of Navalny to be good news, but the president faces problems that extend beyond Navalny.

Levada’s Social Mood index, which measures Russians’ overall social, political, and economic sentiments, rose to 78 in January from 75 in October, with respondents more upbeat about their family’s material situation, the country’s economic and political situation, and expectations for the country and family.

However, the share of those approving the government fell six points. Why? An increasing number of people, even those who support Putin, believe the government is inefficient, fosters massive corruption, curtails economic opportunities and harms quality of life.

While most Russians believe Putin can put the country back on track, the survey data suggests a growing number of citizens are doubtful. And increasingly citizens feel empowered to drive change themselves.

Levada and Moscow’s Higher School of Economics (HSE) released 2020 data indicating that, 30 years into Russia’s transition to democracy, citizens increasingly believe they can influence their fate.

In a larger survey, HSE reported that the share of respondents who said they are able to influence their community rose to 18% last year from 13% in 2016.

The data indicates that more Russians are actively addressing a wide range of issues. The foreign press tends to focus on protests, but around the country, people are becoming more active every day to bring change.

Navalny represents a revolutionary approach. But polls suggest that most Russians are not ready for sudden, radical change. And some experts point to another type of opposition politician.

In Novosibirsk — Russia’s third largest city — Independent City Deputy Natalia Pinus posted an editorial last fall asking, “What should those who want change but not a revolution do?” During her first term, she introduced public monthly reports, occasional live reports from city leaders’ meetings and public voting for local projects. She also challenged powerful forces in the city by demanding the publication of the names of all businesses that owe large sums to the city.

Pinus was re-elected with the largest number of votes in any district, and before the end of the year, the city’s mayor published the list of debtors.

A new sense of empowerment is spreading through villages. Villagers in Manjerok — located in one of the most beautiful but poorest regions in the country — recently united to save the last public space on the village’s river from being auctioned off by the mayor.

Navalny has captured the attention of the world with his demand for a democratic Russia. The world should listen and let Russians decide what their priorities are and who their leaders will be. 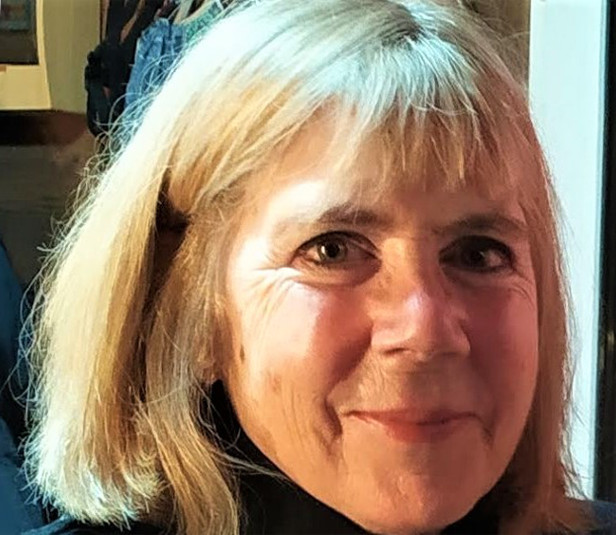 Sarah Lindemann-Komarova has been a community development activist in Siberia since 1992. She is a founder of the Siberian Civic Initiatives Support Center Foundation and the Russian community school movement. A graduate of Columbia University in the United States, she recently has focused on research and writing. She has written for The Nation and co-authored two academic articles.