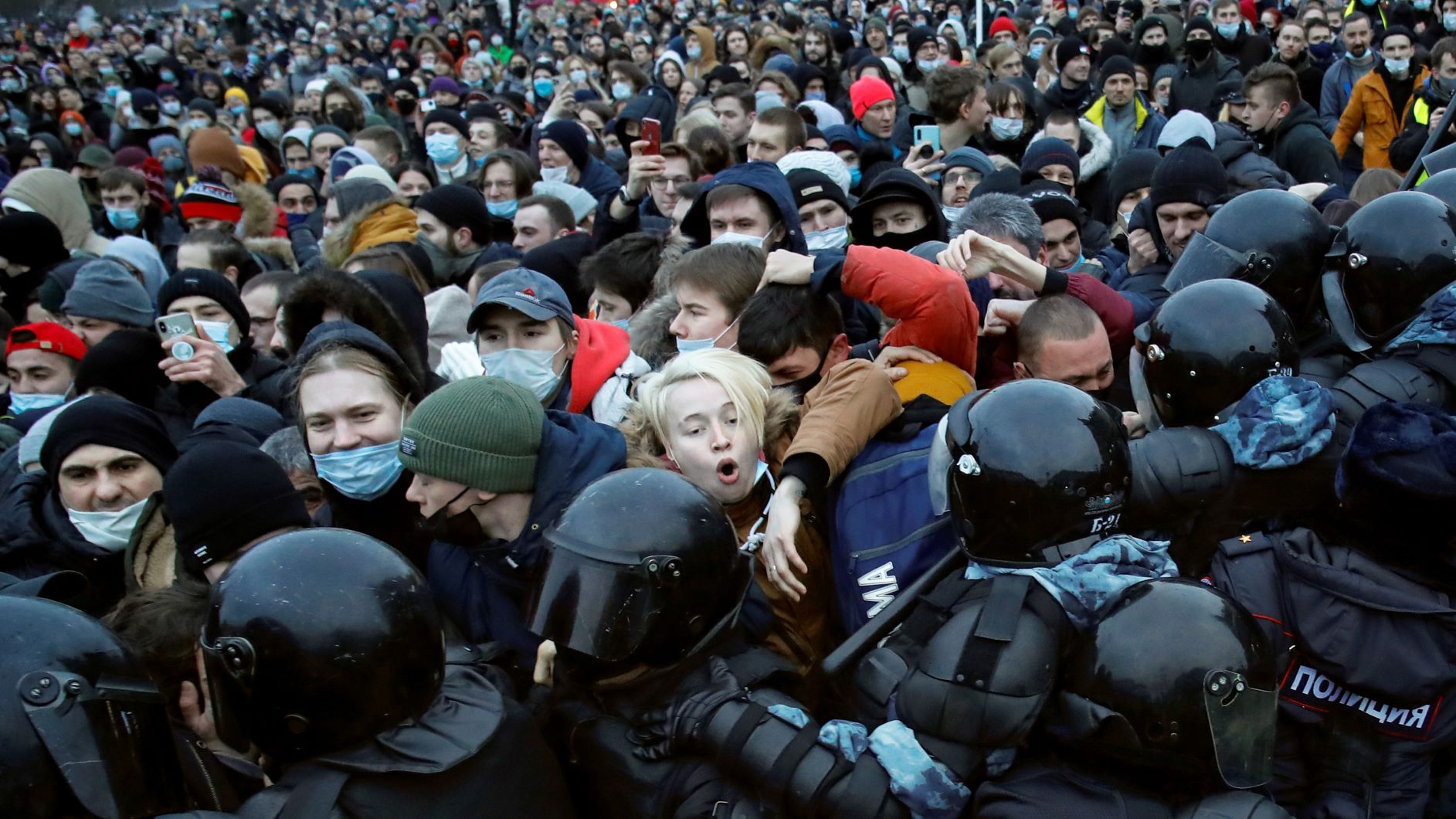 Demonstrators clash with police during a protest against the jailing of opposition leader Alexei Navalny in St.Petersburg, Russia, 23 January 2021. (AP Photo/Dmitri Lovetsky)

“Vladimir Putin IS Russia,” a Kremlin aide once said.

The tsar-like president, in power for more than 20 years and eligible to rule until 2036, seems immortal. A long list of people who have opposed him are either in jail or exile, or dead.

But now, as anti-corruption activist Alexei Navalny comes to the fore, is the 68-year-old Kremlin leader turning a daring 44-year-old lawyer into a martyr? Are we seeing the beginning of the end of Putin’s grip on power?

On the weekend, police detained more than 3,000 people and used force to break up rallies across Russia as tens of thousands of protesters ignored extreme cold to demonstrate for the release of Kremlin critic Navalny.

In the largest demonstrations in Russin in a decade, protestors demanded freedom for Navalny, who was poisoned by Kremlin agents last year and now, back from hospital in Germany, faces old, unproven charges of “fraud.”

The Kremlin downplayed the scale of the demonstrations and accused the United States of meddling in Russia’s internal affairs. Washington called on Russian authorities to release protesters and journalists detained at the demonstrations, and condemned what it called “harsh tactics” used by police.

Young Russians have known no other leader than Putin.

Physically the world’s largest country, with a population of 144 million, Russia is a nuclear power and major exporter of oil, gas and natural resources, with a rich history and culture and an educated, aspiring population.

Under Putin, large numbers of talented youth have fled the once Communist country. Millions of youths have grown up knowing no other Kremlin leader than Putin.

From Moscow’s Matrosskaya Tishina prison, where he is being held pending a new court case, Navalny told his followers not to believe it if his “suicide” were ever reported, as he had no intention of killing himself.

“How can we live with such lawlessness and not be outraged?” tweeted Navalny’s lawyer, Lyubov Sobol, before she was arrested.

Some Russians, both those protesting and those watching, had the feeling that a decisive battle might be coming.

Dissident Navalny has launched a direct attack on Putin.

The regime has many ways, short of poison, of ruining life for opponents. It can plant drugs on a person, send in tax inspectors or bar a student from university.

Navalny has raised the stakes in his fight against Putin. In his first direct attack on the Kremlin leader rather than on Putin’s cronies, Navalny has just released a film called “Putin’s Palace. History of the World’s Largest Bribe”. In a week, it has attracted more than 85 million views.

The film shows the Praskoveyevka Estate, 39 times the size of Monaco, under construction for 15 years at a cost of $1.35 billion.

Putin’s palace reportedly has an imperial eagle over the gate, exclusive Italian furniture, a theatre, hookah bar and casino, underground hockey stadium, aqua-discoteque, vineyards and private tunnel down to the Black Sea. Dissidents and whistleblowers say the palace features a room with toy cars, a special area of the kitchen for “washing eggs” and gold toilet brushes — all paid for by loyal oligarchs.

“Stop putting up with this, stop feeding these feasting villains,” is Navalny’s message at the end of the film.

‘Navalny has become something of a mythical hero.’

Many critics of the regime expect Putin to try to silence Navalny by ensuring he gets a long labour camp sentence when his case comes to court in February. If Navalny is sidelined for years, his movement could lose momentum.

Commenting in independent, English-language The Moscow Times newspaper, international policy expert Alexander Baunov said the authorities had brought about their own worst nightmare by turning Navalny into the clear leader of the opposition and Russia’s number two politician.

“The Kremlin’s hard-edged treatment of Navalny has backfired spectacularly,” Baunov wrote. “Having miraculously survived the poisoning, Navalny has become something of a mythical hero, resurrected and given a second chance: not to live out his days peacefully abroad but to conquer evil, defy death and defeat his enemies.”

The West has expressed concern but its sanctions have so far had little effect. It remains to be seen whether new U.S. President Joe Biden, with his focus on human rights, can coax Russia down a more democratic path.

Former oil tycoon and opposition sponsor Mikhail Khodorkovsky, himself jailed for 10 years and now in exile, praised Navalny. “Navalny did absolutely the right thing. Either you surrender or you go back to fight,” he said.

But Khodorkovsky warned that circumstances could turn deadly for the opposition. “The arrest of Navalny marks the transition of Putin’s regime to demonstrative repression, in the style of Central Asian despots,” he said.

Today’s situation in Russia reminds me of the look of disbelief that I saw on the face of former Romanian dictator Nicolae Ceaucescu when he realised the people had turned against him. On Christmas Day 1989, Ceaucescu and wife Elena were put up against a wall and shot. But not before his Securitate snipers had killed many innocent Romanians.

Today, would Russian forces shoot their own people for Putin’s gold toilet brushes?

Consider Belarus last year. Citizens there came close to ousting dictator Alexander Lukashenko before he bought himself time by appealing to Putin and getting a loan to pay his security forces.

Pro-democracy activists consider it important that if and when Putin goes, peacefully or not, it is important that his successor not turn into another tsar.

Khodorkovsky, whose own political ambitions have faded but who continues to contemplate Russia’s future, argues that the country needs not a presidential system, with power vested in one man, but a system where the “monarch” is decorative and prime minister and parliament rule.