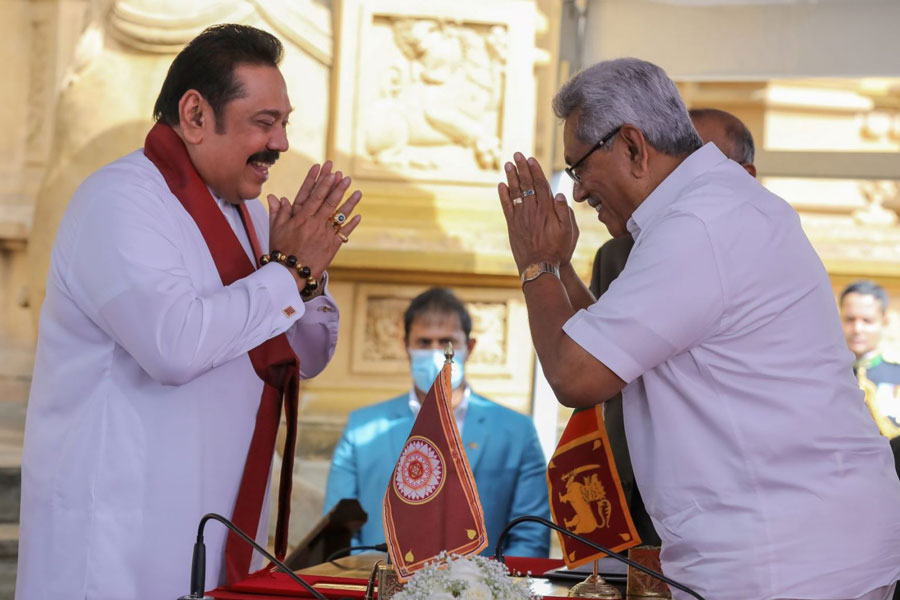 Following parliamentary polls earlier this month, two brothers — Gotabaya and Mahinda Rajapaksa — hold the presidency and the prime minister’s office, respectively, on the Indian Ocean island. Four family members hold cabinet posts, and a younger brother of the president and prime minister is the theoretician of the ruling party.

Family dynasties are nothing new in populous South Asia. In Sri Lanka, the Rajapaksas follow in the footsteps of the Bandaranaike family — Chandrika Bandaranaike Kumaratunga served as president while both her father and mother were former prime ministers.

Still, the Rajapaksas’ influence involves not only the immediate family but also uncles, nephews and the extended family.

The return of the Rajapaksa clan to power — Mahinda was president and Gotabaya defence secretary when the military put a brutal end to a bloody civil war in 2009 — has prompted criticism from human rights advocates.

“President Rajapaksa is rapidly turning the clock back to the repression that prevailed during the previous Rajapaksa administration,” said Meenakshi Ganguly, South Asia director of Human Rights Watch, accusing the government of “waging a campaign of fear and intimidation against human rights activists, journalists, lawyers and others challenging government policy.”

Already in June, United Nations High Commissioner for Human Rights Michelle Bachelet expressed alarm over a clampdown on freedom of expression in Sri Lanka during the COVID-19 crisis.

The Rajapaksas’ centre-left Sri Lanka People’s Front party and its allies won a comfortable two-thirds parliamentary majority in the August 5 vote as they benefited from a wave of ultra-nationalist support from the majority Sinhalese community. Gotabaya Rajapaksa had already won the presidency last November.

Sri Lanka’s population of 21.5 million is made up of nearly 75% Sinhalese (mostly Buddhists), 11% Tamils, 9.3% Muslims and smaller ethnic groups.

Tamil Tiger rebels led a separatist revolt that erupted into a nearly 30-year ethnic conflict that was crushed by government troops in mid-2009 when the Rajapaksas were last in power. The rebels, backed by some ethnic Tamils in nearby southern India, demanded self-rule in the northeast of Sri Lanka, where Tamils are in the majority.

Thousands of rebels, government soldiers and civilians died in the conflict.

When the two brothers were last in power between 2005 and 2015, international human rights groups accused the government of war crimes. Allegations of large-scale corruption during that period have also dogged the brothers.

When Western powers including the United States, worried about human rights abuses, declined to support the government’s tactics for suppressing the separatist revolt, the government turned to long-time partners India and China.

The two Asian powers have invested heavily in Sri Lanka, including in massive infrastructure projects, and provided many loans. The South Asian nation is particularly indebted to China, which has bought a port on one of the world’s busiest shipping lanes that is part of its strategic Belt and Road Initiative. Some worry that the Hambantota port, south of the capital Colombo, could become a Chinese naval facility.

Japan is also a key partner and a major source of grants and loans.

‘Dynasty will rule Sri Lanka with an iron hand.’

The Rajapaksa regime has an authoritarian bent and draws support from former retired military colleagues, many of whom have been appointed to key positions in the government, drawing concern about the military’s influence in Sri Lankan politics. The president has appointed the army commander to head the task force managing the response to the COVID-19 pandemic.

“The family will rule with a heavy hand, just like ultra-nationalist regimes in the rest of the world,” said Dayan Jayatillake, a former ambassador and political analyst who predicted the new government will enforce a policy of Sinhala Buddhist supremacy.

Although Sri Lanka’s civil war ended more than a decade ago, reconciliation between ethnic groups has been slow. Attacks on churches and hotels on Easter last year by Muslim extremist groups led to a backlash against peaceful Muslims.

Jehan Perera, a political affairs commentator and newspaper columnist, said the Rajapaksas will be viewed at home as tough nationalist leaders who are defending national sovereignty and independence.

“From a western perspective, they would be seen differently, as leaders who are authoritarian or authoritarian-bent although democratically elected, but not so bound by international conventions like human rights and agreements that Sri Lanka has signed under internationally mechanisms,” Perera said.

The new government faces daunting challenges — economic growth in spite of the coronavirus and reconciliation between the majority Sinhalese and minority Tamils and Muslims. In the international arena, Sri Lanka looks to balance the sometimes competing interests of India and China while mollifying the United States, among the most vocal over human rights concerns.

For Washington, Sri Lanka holds considerable strategic value because of its location in the Indian Ocean, not far from the southeastern tip of India. Sri Lanka sends a sizable portion of its garment exports to the United States.

“We are caught up in this power game between India, China, Japan and the U.S. because of our geostrategic location. We want to avoid that,” Colombage was quoted last week as saying. “So that is why the President is very clear that we want to maintain our neutrality and don’t want to be caught up in the major power game.”

Perera said that while China is an important source of development aid, neighboring India is a crucial economic and security partner. “We are a security problem for India being on our doorstep,” Perera said. “Thus, the government has to balance its interests between the two Asian superpowers,”