Paterson city and its powerful waterfall drew my immigrant family from the Middle East. The cataract may hold the key to the New Jersey city’s future. 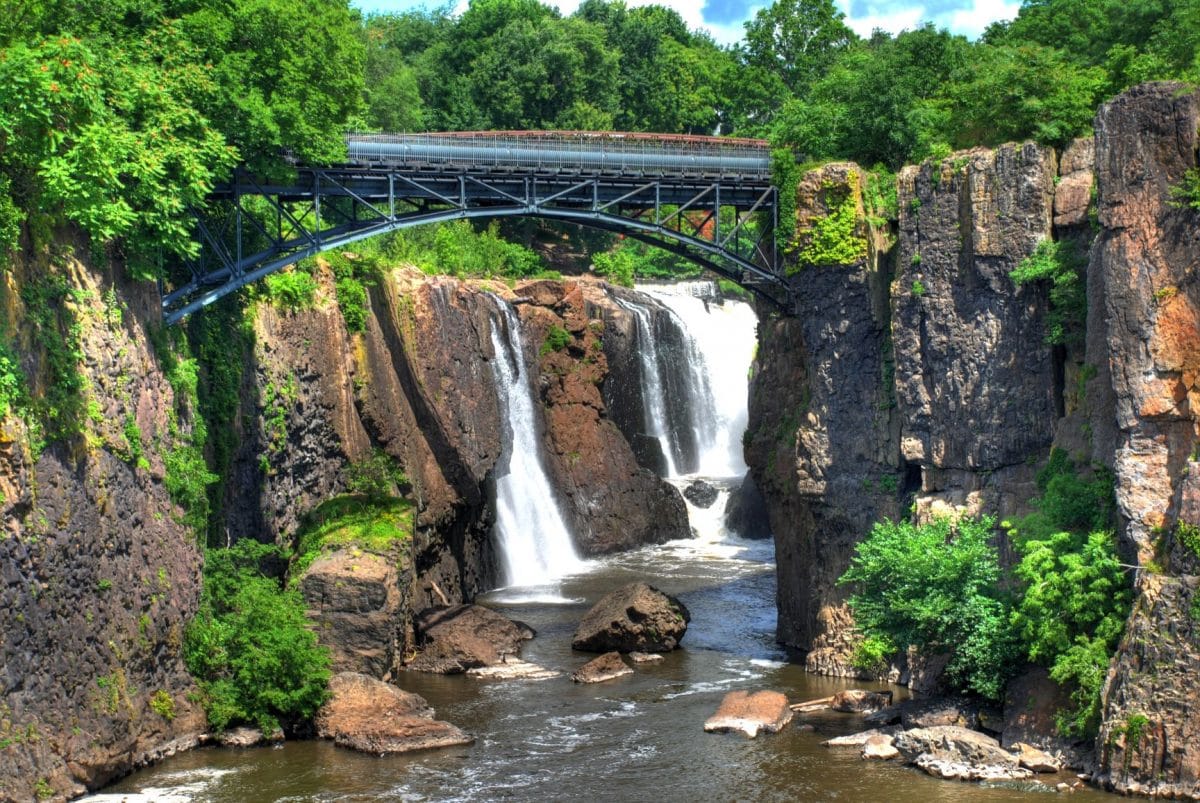 The city of Paterson’s celebrated waterfall sits in the northern part of the U.S. state of New Jersey.

Its thunderous water crashes into rocks at the bottom before sliding slowly into the Passaic River. As it does, the water fades from a potent, bubbly white to brown and gray. The falls are surrounded by vibrant trees and moss that climbs up sturdy rocks. Two dusty-looking boulders are connected by a man-made, teal blue, rusting metal bridge.

Over centuries, the waterfall was at the heart of Paterson’s economic rise. It then saw the city’s demise but now offers hope for the future.

Paterson was the first planned city in the United States and was designed for industrial purposes. Alexander Hamilton and the Society for Establishing Useful Manufactures constructed the waterfall in 1791 after hiring Pierre Charles to design a power system that would siphon water from the Passaic River to power enormous brick mills.

Hamilton believed that Paterson Falls would be at the heart of the city’s economic success. His hopes were soon realized as it generated energy that powered the economy and provided a livelihood for those who worked long hours producing cotton textiles, steam locomotives, colt revolvers and aircraft engines.

Paterson has long been a destination for immigrant families, one that has evolved with economic and social change in the United States. Paterson welcomed many immigrant factory workers, who flowed into the city like the water that powered the booming mill industry.

The murky stream in Paterson, New Jersey did not match their description.

Among the immigrants was my grandfather. He had heard of Paterson’s prosperous past and decided it would be the perfect place to bring his family to settle down. My grandfather and my uncle visited the waterfall often, and as I grew up, they would take me there and tell me the stories about Paterson’s economic boom.

Unfortunately, by the time they arrived, Paterson’s once booming industry had turned into that brown, polluted water at the end of the Passaic River — worthless and ugly.

My uncle dropped out of college to become an electrician because he needed a steady line of income and school was taking up his time. My grandfather saved up money to bring my family from overseas, and he took on many low-wage occupations.

After he moved my family here from Palestine, he told me he visited the waterfall often between his shifts because its remoteness allowed him quiet time in his chaotic days. He said the water must have changed because the way people had described it to him suggested it could heal a nation.

But the murky stream he saw did not match their description.

Paterson’s demise left my family in poverty and struggling to make ends meet. My mother was unemployed and scraped together what she could from food stamps and government checks to take care of her four children.

This story wasn’t an unusual one in Paterson. “​When my mother was raising my brother and me all those years ago in Paterson, there were the same basic parallels to our city today,” Mayor Andre Sayegh said in 2014. “But the difference now is that random acts of violence are occurring on our streets every day.” ​

The city is made up mainly of immigrants.

Sayegh has released a public safety plan that will increase police foot patrols and strengthen collaboration between the Passaic County Sheriff’s Department and the Paterson Police Department to help bring down crime.

Although Paterson continues to struggle with poverty, there have been gains because of free school breakfasts, greater access to health care and academic achievement by students on state-administered literacy tests thanks to the Paterson Alliance, the city’s non-profit agency.

Paterson’s population is made up mainly of immigrants, and the current immigration debate has hit home here. In 2017, Immigration and Customs Enforcement, a federal agency, arrested 3,189 immigrants, a third of whom did not have a criminal conviction.

In that same year, then mayor Jose Torres stated that ​Paterson police would not help federal agents detain or deport immigrants “who are doing nothing more than raising their families and contributing to the vibrant culture and successful economy of our great city.”

The waterfall is one thing we can be proud of in Paterson, and when I do get the chance to visit, it is a serene and renewing experience. Because my middle school is in Paterson, we often went on field trips there to learn about its history. I used to be scared of crossing the bridge over the waterfall for fear of falling in.

Looking back, I realize I had already fallen in and been pushed down the river by the current.

Two hundred years ago, the waterfall attracted immigrants and provided them with reliable jobs and sanctuary. Now its principal purpose is as scenery. But Paterson is leveraging the scenery, educating citizens and their children about the city’s history through park tours and junior ranger programs.

I believe Paterson Falls will sit at the heart of this improvement as surrounding restaurants and stores reel in tourists who then may decide to explore the city and its diverse culture.

Paterson is trying to revitalize itself and improve the quality of life for its citizens. Restoring the city’s grandeur and realizing Alexander Hamilton’s hopes will require the efforts and dedication of every generation.

Cara Khalifeh will be starting her penultimate year of study at Westover School in Middlebury, Connecticut. She was born and raised in Paterson, New Jersey. She plays volleyball, squash and lacrosse and is a member of the school’s Africa-American and Latina Student Association. This summer she attended a political leadership program for young women in Washington, DC, and interned at a financial advisory firm in New York. She is interested in business, finance, political science and social sciences.