Pakistan’s Imran Khan was a cricket star with glamorous women on his arm. Now he is poised to become prime minister of the South Asian nation. 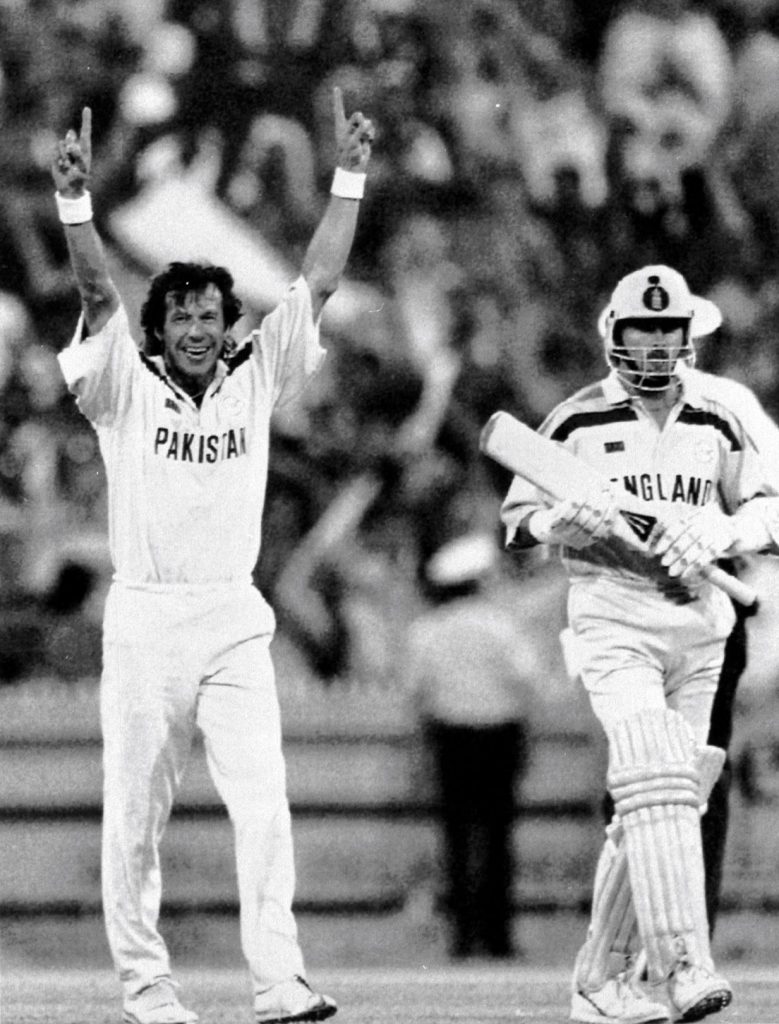 Pakistan captain Imran Khan, left, raises his arms in triumph as England’s last batsman Richard Illingworth walks away after being given out during the World Cup Cricket Final, in Melbourne, Australia, 25 March 1992. (AP Photo/Ross Setford)

Former cricket star Imran Khan is expected to become Pakistan’s next prime minister after his party won the most votes in his nation’s recent elections. News-Decoder correspondent John Mehaffey reflects on Khan’s career in cricket-mad South Asia — and on parallels between sport and politics.

Urged by captain Imran Khan to fight like “cornered tigers,” a Pakistan cricket side facing instant elimination in the first round of the 1992 cricket World Cup rallied to reach the final where they beat England at the Melbourne Cricket Ground.

Khan, in his final match for his country and in his 40th year, top-scored with 72 and then swapped sport for politics. He formed the Tehreek-e-Insaf party, which after two decades in the wilderness won last month’s Pakistan general election. He is now poised to become his country’s prime minister.

News reports routinely describe Khan as a former playboy and retired cricketer. Both descriptions are strictly accurate, but the first is misleading and the second gives no indication of Khan’s stature in a game which is played and followed with fanatical devotion on the Indian sub-continent.

The Indian cricket historian Ramachandra Guha once wrote that the television audience when India’s Sachin Tendulkar was batting against the Pakistan bowlers exceeded the total population of Europe.

Khan was a fixture in English newspaper social pages during the 1980s when he was pictured with a succession of women friends, including several born into aristocratic families.

But as he himself has pointed out, he preferred night clubs to bars because he did not drink alcohol, and his social time was strictly limited because he played cricket six hours a day for his English county side Sussex in return for a modest income.

Cricket was the true passion for the Oxford-educated Khan, and through sheer hard work he turned himself into an all-rounder — a player who both bats and bowls — who is rated in the history of the game behind only the incomparable West Indian Garfield Sobers.

The pair are among a small handful of the hundreds of all-rounders who have played international cricket and who could have been selected as either a batsman or a bowler only.

Khan’s figures after he assumed the captaincy of his country in 1982 are astonishing.

A batting average in excess of 50 runs is regarded as the mark of a great batsman. A bowler who captures a significant number of wickets at around 20 runs each is considered a great bowler. In 48 tests as captain, Imran averaged 52.34 runs per innings and his wickets cost 20.26 each.

“Back-stabbings that would have raised eyebrows among the Borgia family.”

As captain, Khan unified a team of undoubted talent but perennial under-achievement into a side that recorded test series wins over England, Australia and India, and drew two series with an all-conquering West Indies’ side before winning the one-day World Cup. Test matches are played over five days.

He is without doubt the finest cricketer produced by Pakistan and one whose overall contribution as captain, batsman and fast bowler is unmatched anywhere.

It is impossible to judge what relevance sporting achievements have to a career in politics, but Khan’s biographer, Christopher Sandford, saw obvious parallels.

“For close on 25 years his daily routine took place against a backdrop of almost farcical administrative incompetence, fanatical public adulation or hostility, frequently swinging from one to the other and back again in the course of the same match, an equally heated national media, and, not least a culture of dressing room conspiracies, betrayals and figurative back-stabbings that would have raised eyebrows among the Borgia family,” Sandford has written in the past.

“Again, these were conditions Imran was to find instantly familiar in his post-retirement political career.”