India and Pakistan — both nuclear powers — have fought three wars over Kashmir. But neither will yield in one of the world’s intractable conflicts. 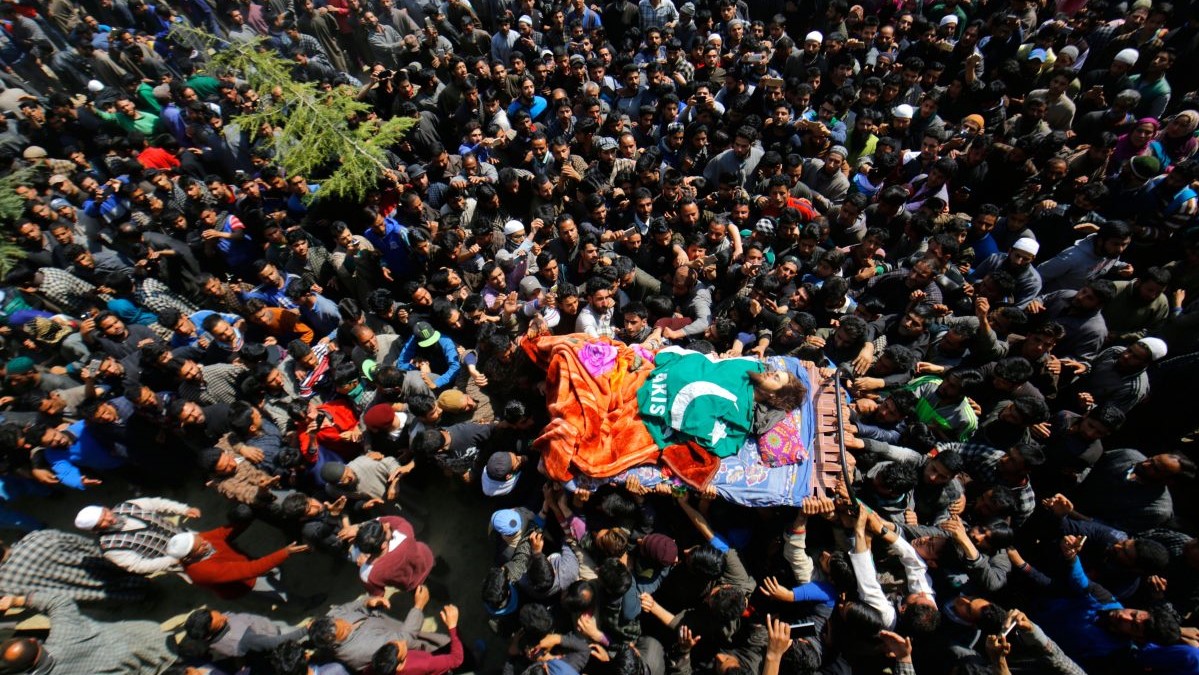 Kashmiri villagers carry the body of a militant during a funeral procession south of Srinagar, the summer capital of Indian Kashmir, 27 March 2017. (EPA/Farooq Khan)

This is the first of two stories about Kashmir by students at King’s College London. For more decoders on big issues, click here.

Imagine a family dispute: Two brothers fight over a piece of land, so much that they are prepared to kill each other.

This is an analogy for the seven-decades-old conflict over Kashmir, a divided territory straddling the northernmost part of the frontier between India and Pakistan.

Kashmir is not only one of the oldest unresolved disputes at the United Nations. It is also one of the most dangerous.

It is the major bone of contention between two nuclear-armed countries that have gone to war four times since they achieved independence from Britain in 1947. Three of those wars, plus numerous skirmishes and border incidents, have been over Kashmir.

Why are India and Pakistan willing to risk nuclear annihilation over a mountainous piece of land that is home to fewer than 17 million people, barely one percent of their combined population?

The conflict goes back to the partition of British India.

Britain’s rule of the Indian subcontinent ended in 1947 with partition along religious lines. India became a majority Hindu nation and Pakistan a Muslim-dominated state.

But the division was not clear cut. It affected other religious communities and left a number of independent, princely states facing a dilemma: to join India or Pakistan. The states included the Muslim-majority Jammu and Kashmir.

Amid the chaos of partition, Pakistani raiders attacked the state, which appealed for help to India.

India conditioned military support on Jammu and Kashmir joining India. After the ruler of the princely state, Maharaja Hari Singh, signed the Instrument of Accession in October 1947, acceding his state to India, Indian forces entered the state to expel the raiders, sparking the first of three wars with Pakistan over Kashmir.

In April 1948, the United Nations Security Council called on both sides to implement a three-phase peace plan: Pakistan was to withdraw the raiders, India to reduce its forces and a plebiscite was to be held on the territory’s future status.

Neither side respected the initial UN Resolution.

A ceasefire agreement took effect on January 1, 1949, but neither side was willing to pull back its forces before the other, and the plebiscite was never organized.

Ever since, the territory has been divided along the ceasefire line, or Line of Control. On one side is the Indian state of Jammu and Kashmir, which has a population of almost 14 million. On the other is Pakistani Kashmir, home to just under three million. Both parts are majority Muslim.

Hostilities broke out again in 1965 as Pakistan sought to put pressure on India to negotiate. The war ended in stalemate.

The two countries also went to war in 1971, when India intervened in the separation of what were then West and East Pakistan. The latter is now Bangladesh.

After almost three decades punctuated by militant uprisings, the third Kashmir war broke out in May 1999 and ended 12 weeks later when U.S. President Bill Clinton, fearing a nuclear confrontation, persuaded Pakistan to withdraw.

The potential for conflict persists.

Today, the scenario in Kashmir is little different from its past, characterized by an insurgency in the India-controlled state. The past year has seen a series of crises in the region, sparked by the killing by Indian security forces in July 2016 of Burhan Wani, the commander of a militant group and an opponent of Indian rule in Kashmir.

The killing triggered violent protests and riots in the Indian-administered Kashmir valley. More than 9,000 people were injured over 50 days.

The two countries hold diametrically opposed views on the dispute over Kashmir — although they agree on the strategic importance of a region next to China and Afghanistan, with major water resources and bisected by important supply routes.

For New Delhi, Kashmir is an integral part of India under the 1947 Instrument of Accession and Pakistan has no role to play in its domestic affairs.

Pakistan argues that the UN Security Council Resolution of 1948 upholds the right of the people of Kashmir to self-determination. It seeks a plebiscite on their future.

The local population appears divided, with a plurality favoring independence. A 2013 poll conducted on both sides of the Line of Control showed that 15 percent of the population wanted Kashmir to be part of Pakistan, 21 percent wanted it to remain in India and 43 percent wanted independence. The poll is included in Stephen Cohen’s book “Shooting for a Century“.

Kashmiri independence would be in Pakistan’s interest. It would come at a huge political cost to India and in Pakistani eyes might contribute to the Balkanization of India and damage its international standing.

Where do we go from here?

The dispute has received worldwide attention, yet the international community seems poorly placed to resolve the issue.

A 1972 accord called the Simla Agreement aimed to normalize Indo-Pakistani relations after the 1971 war and the independence of Bangladesh. It stipulated that the Kashmir dispute should be settled peacefully through bilateral negotiations, without foreign interference.

But South Asia’s emerging security architecture — with an emerging China-Pakistan nexus against a tacit Indo-U.S. alliance — looks certain to maintain tension between India and Pakistan. Some fear a regional Cold War.

Resolution of the Kashmir dispute would require adjustments in India’s federal system, a reappraisal of the military balance between India and Pakistan and changes in Kashmir’s constituent parts. It could take years for any of these decisions to be made, let along put into action.

Internationalize the Line of Control?

One proposed solution would be to convert the Line of Control, which divides Kashmir into the Indian-administered zone south of the line and a Pakistan-administered area to the north, into an internationally recognized border.

But there is little hope that Pakistan would support that approach as it would irrevocably place most of the Muslim-populated Kashmir Valley within India.

In New Delhi and Islamabad, the Kashmir dispute is perceived as a zero sum game where equal gains for both sides are next to impossible. South Asia seems a far cry from the dream of Pakistan’s founder Muhammad Ali Jinnah, who envisaged Indo-Pakistani relations as “an association similar to that between the United States and Canada.”

Ammar Nainar is a first year undergraduate student at King’s College London, studying International Relations. He is an ardent reader of international and strategic affairs and holds a particular interest in South Asia’s security issues and Indian foreign and security policies.  Ammar is from Chennai in the southern part of India.