No end to information war in Ukraine

An information battle between Ukraine and Russia has brought out the worst in their media machines. It’s time for a Ukraine with an independent media. 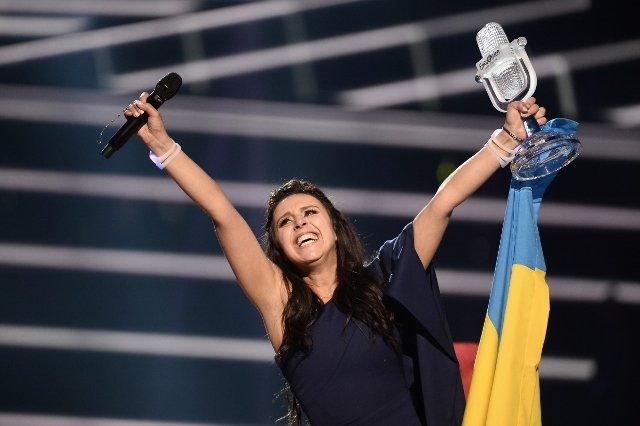 Ukraine’s Jamala with her country’s flag after winning the Eurovision Song Contest, Stockholm, Sweden, 14 May 2016. Russia reacted angrily, saying her victory was part of a propaganda war. (EPA/Maja Suslin)

This is the second of two articles on Ukraine. We published the first one, “Why Ukraine Matters” by Melinda Haring, on Wednesday.

There are three distinct levels to the war in Ukraine. First, the conventional war, where the Ukrainian army faces Russian-supported separatists in Eastern Ukraine.

Second is the diplomatic war between Ukraine, along with its Western allies, and Russia over the roots of the conflict and ways to end it.

And there is the information war, contested by the same actors, each trying to present its interpretation of events and actions as the truth.

The information war is being fought online and in the news, via song contests and referendums in countries far removed from the action.

Russian media have been providing unfavorable coverage of the Revolution of Dignity from the start. Once Ukrainian President Viktor Yanukovych was removed from power in February 2014, Russian news organizations ramped up their reporting, portraying the new Ukrainian government as a fascist junta that had illegally seized power.

Oligarchs are heavily involved in the media in Ukraine.

This approach to reporting using confrontational rhetoric has not shifted since then. The purpose is not to change the mind of Ukrainians living in the west of the country, but to increase the distrust between those in the east and south, closest to Russia, and the government in Kiev.

The Ukrainian media’s attempts to counteract the negative coverage have been hampered by the fact that in the regions bordering Russia, most Ukrainians already depended on Russian news channels for information and analysis of current events before the conflict even began. Thus, the Russian media had a solid platform to broadcast their message.

The fight over the information space in Ukraine has been further complicated by the politicized nature of the media there. Reporters Without Borders ranked Ukraine 107 out of 180 countries in terms of press freedom in 2016.

While this low ranking can be partly explained by the fact that the separatist enclaves around Donetsk and Lugansk allow no independent journalism, the unfortunate truth is that the oligarchs are heavily involved in the media landscape in Ukraine.

Almost every major oligarch owns a news network, and because they vehemently disagree on many issues, political conflicts can spill onto the airwaves, preventing the Ukrainian media from presenting a united front against Russian propaganda.

Even President Petro Poroshenko owns a channel, Channel 5, which means he has a vested interest in maintaining the oligarchization of the media market in Ukraine.

Actions taken by Ukraine’s government to combat Russia’s information offensive have only served to invite criticism.

In December 2014, Ukraine established the Ministry of Information Policy, an aptly Orwellian moniker for a ministry designed primarily to combat Russian propaganda with Ukrainian propaganda.

In September 2015, Poroshenko banned a long list of journalists from Ukraine with the professed goal of preventing biased coverage of the conflict. While some of them were indeed Russian journalists, others were Western journalists seemingly banned simply for reporting as objectively as possible.

This month, a Ukrainian hacking collective released the names, phone numbers and email addresses of more than 4,500 journalists who had been accredited by Russian-supported separatists, purportedly to expose supporters of the separatist regimes and those with anti-Ukrainian feelings.

Almost half, however, were Western journalists trying to provide a more in-depth look at the isolated regions.

Although some in Ukraine condemned this action, others such as Interior Minister Arsen Avakov have applauded the release of information.

No end in sight to the information war.

Such missteps have led many in the international community to warn Ukraine that censorship is not the answer.

While the Poroshenko administration seeks to provide evidence of victories against Russian propaganda, these actions in effect give the Russian media more ammunition to use in their coverage of the conflict.

There is no end in sight. A fractured, politicized media landscape and a misguided, however understandable, desire to control the narrative impede Ukraine’s ability to compete effectively.

Western international observers almost universally agree that the best way for Ukraine to overcome Russian propaganda is not to spend all its energy putting out small fires while the country’s reform efforts burn to the ground.

A democratic, reformed Ukraine with an independent media is the best answer to Russia’s attempts to sow discontent.

Simon Hoellerbauer (@hoellerbauers) is an Associate Scholar with the Foreign Policy Research Institute’s Eurasia Program and a recent graduate of Kenyon College. This fall, Hoellerbauer will start his doctoral studies in Political Science at the University of North Carolina. He will focus on democratization and democracy promotion.