The EU is partnering with African countries like Niger to stop migration flows. One unintended consequence? Wiping out local livelihoods. 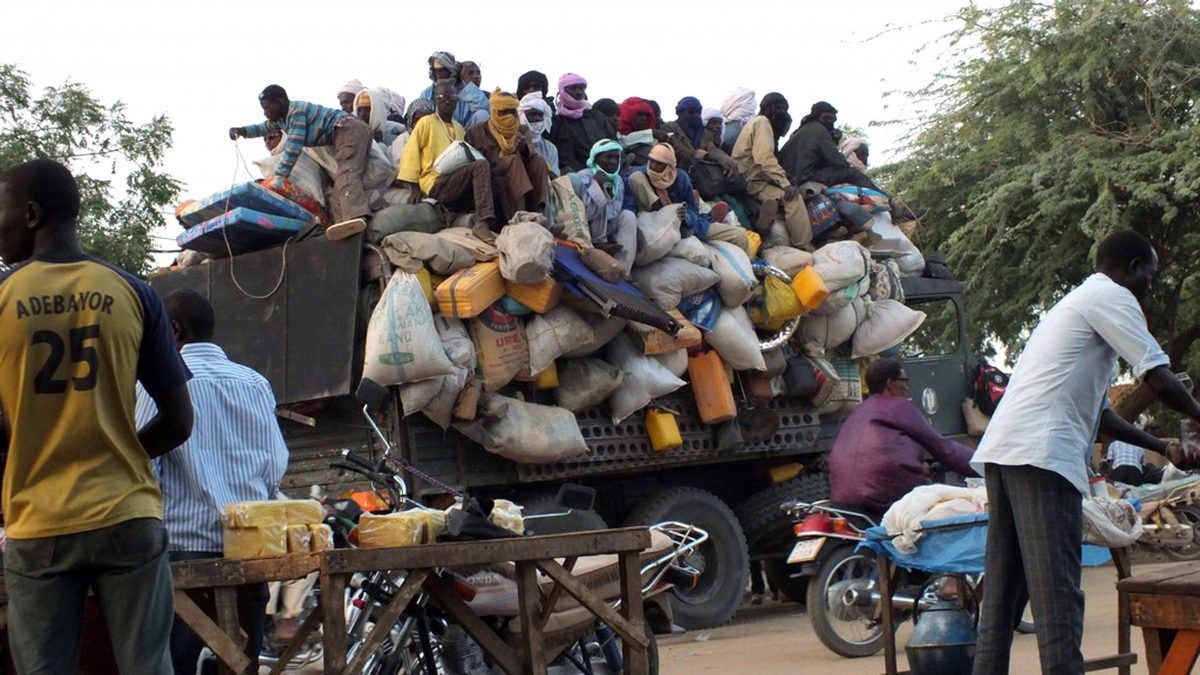 Migrants sit on top of a truck about to leave Agadez, Niger, 27 April 2015 (Ali Abdou/picture-alliance/dpa/AP Images)

Every Monday, up to 200 pickup trucks would gather in the desert city of Agadez, Niger. Nigerien men would load each truck with about 30 men, women and children, bent on heading north for safety, prosperity or health care.

The trucks — mostly white Toyota Hiluxes — would follow a military convoy to the Niger-Libya border, travelling in columns for safety. Crossing the desert is dangerous; it’s easy to get lost in ever-shifting dunes.

But three years ago, the Monday ritual ended. Nowadays, only one or two trucks sneak out of Agadez each week. The streets are quiet. The men who used to smuggle people across Niger’s borders have left, looking for better opportunities elsewhere.

The EU wanted to curb migration at its source.

Agadez’s misfortune is the result of decisions made in Brussels. The European Union — overwhelmed with the entry of 1.8 million migrants in 2015 — accelerated its strategy of externalizing border control to countries like Turkey, Libya and Niger.

Europe’s reasoning: it was best to stop the flow of people closer to its sources, to prevent migrants from making it into Europe where they could then claim asylum or disappear into undocumented life.

Europe adopted this strategy in 2006 at the founding of the Euro-African Dialogue on Migration and Development and has expanded it to more and more countries since 2015.

Niger was an obvious choice of ally for the EU. It’s the poorest country in West Africa and an age-old migration hub.

At its peak in 2016, 400,000 people from other West African countries transited through Niger on their way elsewhere. Between 15 and 39 percent of them said they were headed towards Europe. About half of the people landing in Italy in 2016 had passed through Agadez.

The Nigerien government agreed to crack down on migration in exchange for development funds, military training and international standing. In 2015, Niger adopted a law criminalizing “the illicit smuggling of migrants,” which it has enforced since mid-2016. Since then, a slew of EU and member state officials have visited Niger, underlining their alliance.

Niger has received a total of 247.5 million euros through the EU Trust Fund for Africa to crack down on smugglers and provide economic alternatives for the people working in the migrant economy.

The crackdown has destabilized a volatile region.

By some measures, the crackdown has been a success. By 2019, Niger had succeeded in reducing the number of people passing through the country by 70 percent compared to 2016, according to International Organization for Migration data. More than 300 smugglers, middlemen and ghetto managers have been arrested and at least 300 trucks impounded.

During a 2018 visit, the president of the European Parliament, Antonio Tajani, praised Niger’s efforts, stating that “[w]e need to support this model and extend it to other Sahel countries.”

But with swaths of Nigeriens depending on migration as a means to survive, the crackdown is destabilizing an already volatile region.

In Agadez, where more than half of its 100,000 inhabitants depended on migration in some way, the impact of the crackdown is palpable. “A lot of people have lost their income,” said Fransje Molenaar, a senior research fellow at the European think tank Clingendael.

These Agadezans still need to make a living.

“There was a whole industry servicing the migrants and smugglers, from cooks in the ghettos to women knitting the balaclavas people wear to protect against the desert sun and sand,” Molenaar said. (A ghetto is a compound, rented by a smuggler, where people stay until they move on.)

These Agadezans need to make a living. “Nigeriens themselves very rarely migrate to Europe,” said Flor Didden, a migration expert with the development organisation 11.11.11.

When times are hard, Nigeriens tend to go to neighbouring Algeria or Libya to work for a while before returning home. But the 2015 law makes it all but impossible for them to do so. “They aren’t the policy’s target, but they are its victims. People who are already in a vulnerable position now have even fewer livelihood options left,” Didden said.

Critics say project implementation is slow. So far, 294 livelihood projects submitted by former smugglers have received seed funding, according to an EU official, while between 6,000 and 7,000 smugglers are said to have been put out of business.

It is not certain that agriculture or hairdressing — jobs the EU-funded projects encourage — can be as lucrative as feeding, housing or driving migrants across the desert.

People are worried. Idle hands are easy targets for extremist groups. Some former drivers and smugglers have already turned to banditry or gun smuggling.

Crime has picked up. Armed attacks on roads happen so often that the secretary general of Agadez’s Governorate, Attahir Adam, announced on local radio that no one can leave or enter the city after 5 pm, to “preserve property and human life.”

Migration may have simply moved underground.

It’s possible the EU’s policy has prompted migrants to choose other escape paths.

Without the protection of numbers or a military convoy, smugglers have started arming up for safety, exacerbating militarization in the region.

What is more, migration routes from West African countries have shifted east through Chad, Nigeria and even Cameroon before turning north to Libya, making the journey longer, costlier and more dangerous for migrants.

Laetitia Van der Vennet is a freelance journalist who covers how people, communities and institutions face challenges like poverty and migration. She is based in Belgium and is currently a Fellow in Global Journalism at the Munk School of Global Affairs and Public Policy at the University of Toronto, Canada.