Volunteers to help Syrian refugee children were caught up in Turkey’s attempted coup. Here are their stories of perseverance and improvisation. 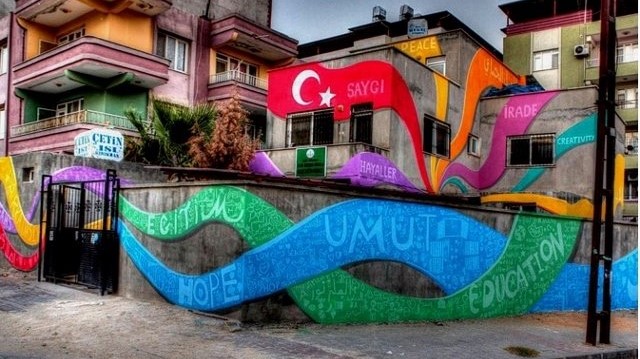 Last month, a team sent by the Chicago-based charity was set to start work in southern Turkey, near the Syrian border, just as a military coup unfolded against Turkey’s ruling regime. Some of the volunteers were stranded inside of Turkey; others called off their trips after Karam canceled the mission out of security concerns.

Those who arrived in Turkey as the first shots in the coup were fired decided nonetheless to do what they could while in the country. Below is the first of two articles in which Karam volunteers describe what happened during those chaotic days.

“Perseverance and making the best out of a challenging situation”

The week-long mission was geared up to teach entrepreneurial and technological workshops to displaced Syrian youth at the Nour School in Khirikhan, southern Turkey.

Some of Karam’s 40 mentors arrived safely in Turkey a few days before July 15. But when the surprise coup erupted that evening, others were getting ready to board flights from outside the country and never made it to Turkey.

One group was stranded at Istanbul’s Ataturk airport through the night and into the next day as the coup played out to the sound of gunfire, rumbling tanks and screaming jet fighters overhead.

Given the uncertain security backdrop, a quick decision was made to cancel the mission to Khirikhan. But those who had already made it to Hatay province along Syria’s border decided to improvise.

During the next week, Karam volunteers, starting at 4:30 a.m. every day, worked with Syrian children to paint a colorful mural with inspiring words and messages written by the kids. They painted the entire interior of the Khirikhan school and fixed the school’s facilities for the new academic year. And they signed up more than three dozen Syrian children for school sponsorships that pay a stipend to families provided they send their kids to school.

In Istanbul, volunteers who had made it to Turkey’s biggest city decided to visit a Syrian refugee school for orphans for a day to conduct six workshops for 80 kids from Grades 1-6. They had no teaching materials as all of their bags were missing, but they pulled through by improvising with what they could buy on the spot.

This was not the week that Karam had been planning for many months, but it left the team with an understanding of perseverance and making the best out of a challenging situation.

“These children are the future of a free and democratic Syria.”

The youngsters who accompanied adults to Turkey endured the worst of the night’s events. After I made my way across the city from Sabiha airport in the Asian part of Istanbul to Ataturk to join them, I found the children passed out, creased and folded uncomfortably in airport chairs.

The sonic booms, gunfire and swarming mobs of the previous night had completely drained them. But in the days to come, it was the children as much as any of us who looked forward to spending a day with the students in the orphans’ school. They would have flown on to Hatay province without a moment’s hesitation.

That temptation never left us. Within hours of the start of the coup, Istanbul was startlingly normal — in fact better than normal, as it took a while for the usual traffic to clog streets once again. There were clusters of tanks and soldiers here and there, but both were attended by flag-waving citizens taking selfies.

Still, the mission we had come to accomplish was always in our thoughts, and the day in the orphan’s school was the redemption we had been looking for.

I was armed with copies of the Greek tragedy “Antigone” and children’s books on ancient Greece and Socrates. We charged through a discussion of the development of Athenian democracy, the role of theater as an educational tool and the essence of Sophocles’s play.

The response of the students was immediate and thrilling — all hands in the air. The legitimacy of the ruler and the responsibility of the citizen — these are concepts the children have lived, and their answers and comments came from a place of knowledge that belied their years.

By the end of each hour’s class, students were able to improvise the roles without a script in hand.

There is always, hovering, that powerful, unspoken intent that these children are the future of a free and democratic Syria. No one there or at Karam doubts this. It’s the driving force behind it all.

In the evening, we dined very late and got to hear about the new families Karam has taken on, about the green-eyed boy selling water in just the right place at just the right time, who will now be attending school. And about his grandmother, who prayed for assistance that morning, and it came that afternoon.

Small miracles, one by one.

Hala Droubi heads the Karam Foundation’s journalism program. A Syrian-American national, she is a graduate of Columbia University’s Journalism School, and has worked for the New York Times in Beirut and Yahoo! in Dubai.

Michelle Ajami is a graduate of Brown University and the Johns Hopkins School of Advanced International Studies. She taught history and literature to New York City public school students for nearly three decades.