UN slow to reshape workplace in wake of #MeToo scandal

A damning report held UNAIDS leaders responsible for creating a culture of impunity and harassment. Why has the UN been so slow to respond? 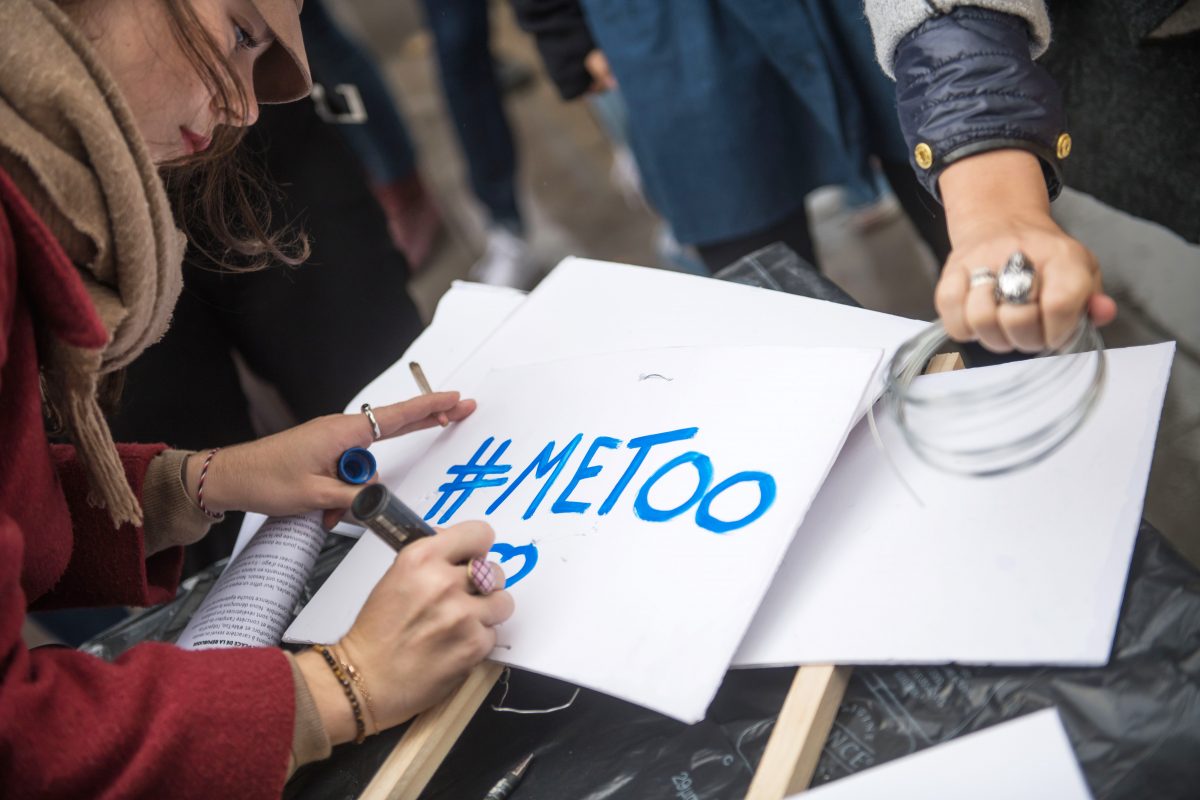 A woman writes the ‘#MeToo’ slogan on a placard during a rally against violence against women, 29 October 2017 (EPA-EFE/CHRISTOPHE PETIT TESSON)

Can the United Nations talk the talk and walk the walk on sexual harassment in the #MeToo era?

The head of the global body recently issued a resounding condemnation of violence against women.

“Not until the half of our population represented by women and girls can live free from fear, violence and everyday insecurity, can we truly say we live in a fair and equal world,” UN Secretary-General António Guterres said last November on the International Day for the Elimination of Violence Against Women.

But just two weeks later, a group of independent experts released a scathing report that cast a shadow over the UN’s commitment to women’s rights.

The report by an Independent Expert Panel said Michel Sidibé, executive director of UNAIDS, and the rest of the organization’s leadership, are “responsible for a culture of impunity, of abuse of office, bullying and harassment, including sexual harassment.”

Based in Geneva, UNAIDS coordinates and leads UN efforts to fight the HIV and AIDS.

The report exposed a conflict within the UN between words and deeds. Although the UN is dedicated to defending human rights, the report indicated that it has been slow to reshape its own workplaces to be safer and more gender-diverse in response to #MeToo scandals.

The report identified a culture of impunity and bullying.

Early last year, as the #MeToo was gathering steam, UNAIDS gender advisor Martina Brostrom went public about an incident in 2015 when she says Luiz Loures — deputy executive director of UNAIDS and a close advisor to Sidibé — forced himself upon her in a hotel elevator, forcibly kissed her and tried to drag her toward his room.

Loures denied the allegations, and an internal UNAIDS review found Brostorm’s claim to be unsubstantiated.

But after The Guardian newspaper published an article about Brostrom’s allegations, more women came forward with similar stories. They included Malayah Harper, a former UNAIDS employee who said Loures had assaulted her in a similar way at a hotel in 2014. Harper told The Guardian that Loures had sexually harassed her for years.

Sidibé has chosen his own departure date.

As pressure for action grew, Sidibé appointed the outside panel of experts to investigate. Its report found that sexual harassment allegations dating back to 2011 had not been adequately addressed by management, including Sidibé. It noted that the evidence “of a broken organizational culture is overwhelming.”

Notwithstanding those findings, the UN’s leadership decided Sidibé could remain at the head of UNAIDS until this June when he retires, six months earlier than originally planned. A special meeting of the Programme Coordinating Board, UNAIDS’ governing body, is scheduled for March 28, when Sidibé will present a plan to address the report’s recommendations.

Sidibé’s announcement that he will resign on his own terms has been widely criticized. In a sharply-worded editorial, The Lancet, one of the world’s most respected medical journals, decried UN leadership and UNAIDS donor countries for failing to hold Sidibé publicly accountable for falling short of the UN’s governance standards.

“In Guterres’ deafening silence, a pervasive unspoken truth is echoed to the global health community: in the name of a greater purpose, the culture of impunity can prevail,” the editorial said.

Few powerful stakeholders have objected to Sidibé’s remaining at the head of the agency until June. Sweden, the second largest donor to UNAIDS, called for Sidibé to resign immediately and promised to withhold further funding for the agency until his departure. But it was alone on the governing board to call for his swift departure.

The people who are part of a problem can’t solve it.

“The people named and blamed by the IEP cannot be left to solve the problem,” said Kaila Mintz, the Toronto-based coordinator of Aids-Free World’s Code Blue Campaign.

Others see it differently. Richard Elliott, Executive Director of the Canadian HIV/AIDS Legal Network, believes that now that Sidibé’s early departure has been confirmed, further action against him is no longer the main priority and could even undermine support for the agency and its important role in mobilizing global action against HIV/AIDS.

Launched in 1996 to coordinate the response to HIV across various UN agencies, “UNAIDS was the first time a cross-agency programme had been set up to mobilize different actors in the UN system with a formal, structured response to a public health challenge,” Elliott said.

Elliott applauded various steps that UNAIDS has taken under Sidibé’s leadership. “To his credit, Michel has spoken out repeatedly about human rights issues,” he said. And “it has been important that an African be at the head of the agency given the terrible toll the pandemic has taken on that continent.”

Although Elliott said the independent panel had issued a “damning report,” he cautioned that with Sidibé leaving in a few months, “the better focus is keeping our eye on the ball.”

Other powerful stakeholders evidently agree with this approach. What does this mean? UN, member countries and civil society groups who condemn sexual harassment struggle to balance #MeToo principles with realpolitik in the world of global diplomacy.

Susanne Courtney is a Fellow in Global Journalism at the Munk School of Global Affairs. She is the former executive director of Action Against Hunger Canada and has spent 10 years in senior roles in international development. She began her career in Canada’s Foreign Service before moving into public affairs and communications consulting.