Memo: Don’t panic yet over Trump

Pulling your hair out over Donald Trump? Don’t panic yet. Soon the President-elect will start feeling cross-currents. It’s the rule of checks and balances. 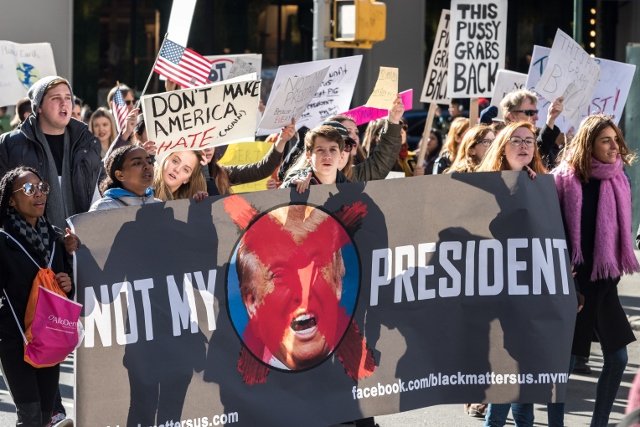 To: The Puzzled and Fearful

Like you, I’m reading mainstream and social media. I, too, hear the gnashing of teeth. Emotions are running high.

At the risk of sounding complacent or complicit, here are some reasons why you need not panic, quite yet, over the results of the U.S. presidential election. Chill!

Donald Trump will soon face very strong cross-currents in his own party that will limit his scope of action.

Slap 45% tariffs on Chinese goods to punish Beijing for unfair trade practices, triggering a trade war? Try selling that to big businesses like Boeing that count on the Chinese market — or to the many Republicans in Congress who represent constituencies with companies that depend on international trade.

Cut taxes and spend big on infrastructure? Fiscal hawks in Trump’s own party won’t want to see the deficit balloon. As much as most everyone would like to spend money on bridges and roads, if it means a large increase in the deficit, you’ll start to hear the voices of fiscal restraint in the Republican Party, including Tea Party sympathizers.

And if you try to pay for roads by cutting entitlements, will that make Trump voters happy?

We should not forget the power of financial markets to force presidents to correct course. If Wall Street caught a whiff of runaway deficits and a spike in inflation, stock markets — remarkably bullish since Trump’s victory — could take a dive.

Repeal Obamacare? We’ve already heard Trump express support for two very costly elements of Obamacare: coverage for those with pre-existing conditions and for children up to age 26 under their parents’ policies.

Many Republicans do not agree with Trump on this. But will they want to end coverage for more than 20 million citizens who now have insurance under Obamacare? Citizens whose purchasing power will plunge if they suddenly are without health insurance.

Line up with Russia behind Syrian President Bashar al-Assad to defeat Islamic State? And in doing so, ditch Gulf allies defending Syrian rebels while bellying up to Iran, who is aligned with Russia and Assad? There’s a reason why the Middle East is complicated and the Syrian conflict has proven so intractable, and Trump’s election doesn’t provide any simple answer.

Ditch the Iran nuclear deal? Companies itching to do business with Tehran and those fearful of a new arms race in the Middle East including European Union leadership could stand in the way.

Draw closer to Russian President Vladimir Putin at the expense of Ukraine? Tell that to the Republican foreign policy establishment in Congress.

Trump’s decision to put both Reince Priebus and Steve Bannon in the White House — the more mainstream Priebus as chief of staff and the combative Bannon as senior advisor — means that he risks being buffeted by two contradictory currents, one representing the Republican establishment, the other Trump’s feisty, disgruntled electoral base.

It’s true that in the areas of social policy and the environment, the Trump Administration could have quick, far-reaching consequences.

But defenders of the rights of women, racial minorities and the LGBT community have recourse to courts. While Trump can move to reshape both the Supreme Court and lower courts, it takes time, and the power of precedent can stay the hand of all but the most zealous judges.

But clean energy is gaining momentum. It offers potentially huge opportunities to companies that invest wisely, and at some point it will become economically advantageous. The market could shift in this direction, especially if there are enticing opportunities outside the United States.

If China and Europe stick to their climate change pledges, will the United States want to see its leadership usurped?

And while governments set broad environmental goals, citizens can have a major influence with their investment and consumption decisions.

It’s a bit ironic, given the Republican Party’s staunch defense of the rights of U.S. states, but the states can have a crucial impact on the environment by enacting green legislation.

The bottom line on the environment: Consumers can wield a substantial amount of power at the microeconomic level, by buying from green companies, boycotting polluters and investing in firms that protect the environment. And action at the state level, especially in big states such as California, can count.

Finally, there are myriad ways in the United States to express one’s political convictions beyond the ballot box.

The demonstrations in several U.S. cities over the past few days are one manifestation. Over the long term as we saw during the Civil Rights era, peaceful demonstrations will have a greater impact than the violent variety. And the sooner protesters accept the verdict of the election, the better.

We saw the impact of street demonstrations on public opinion over time during the Civil Rights era and the Vietnam War. Many will be dusting off their placards!

I suspect that we are going to see a large number of law suits — some but not all aimed at the President-elect himself. Not every judge or jury will be in the pocket of the Republican Party. The judiciary will be tested.

We can expect the Senate to be the focus of a great deal of action. Better get ready for filibusters.

And with Trump and many of his entourage new to the ways of government, the chances of a misstep will be far higher than for a well-oiled political machine.

Nothing bars Trump’s children from taking over day-to-day control of the President-elect’s businesses. But the inherent conflict of interest — and close scrutiny by regulators, lawyers and journalists — will not go away unless he sells the businesses.

This is not a prediction, but it’s worth remembering that only 19 months passed between Richard Nixon’s second inauguration in 1973 after a landslide electoral victory and his forced resignation in disgrace in August 1974.

In U.S. politics, checks and balances can operate in strange and unexpected ways.