Meet a Russian who is helping Ukrainian refugees in Hungary

Ukrainian refugees come to Anastasia in Hungary for a night or two before moving on. This Russian is helping refugees while war rages at home. 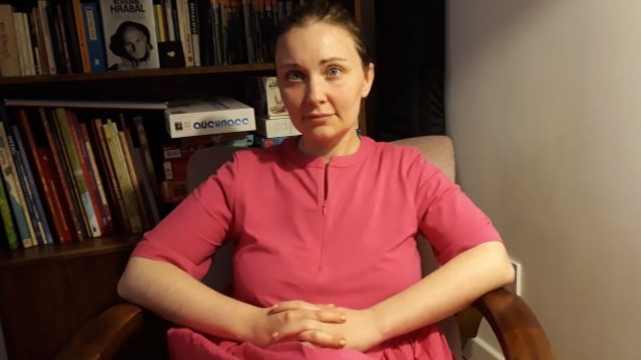 Anastasia at home in Budapest, Hungary (photo by Helen Womack)

Anastasia’s phone is constantly ringing. She is at the heart of an effort by pro-democracy Russians in Budapest to help refugees fleeing war in Ukraine and streaming into Hungary.

“I’m so busy I haven’t had time to think,” she said. “I guess in a while the enormity of it all will hit me.”

Anastastia’s surname is Chukovskaya, a name that resonates with Russians. Her great grandfather was Korney Chukovsky, the children’s poet who famously portrayed Stalin as a cockroach.

Anastasia, 35, and her husband Alexey Zelensky, 34, have been living in Budapest for nine years. They have two children. Alexey is a musician who makes podcasts. Until war broke out, Anastasia, a journalist, was involved in educational projects that took her back and forth between Budapest and Moscow.

“I was actually in Moscow on 24 February,” she said, referring to the day that Russia invaded Ukraine, which shares a border with Hungary.

“Lyosha woke me with a phone call,” she said, using her pet name for her husband. “I flew straight out because I knew what was coming. The skies would be closed. I was astonished and afraid. I didn’t know what I was going to do next, but it all happened naturally, automatically.”

Dozens of Ukrainian refugees have come to their place before moving on.

“Nadia, who helped me when I was pregnant in Moscow, told me her friend Lida was coming from Kyiv. After Lida, there was Mila, with her family and two cats, and then Lena wrote to tell me about Yulia.”

In this way, dozens of people have come to Anastasia and Alexey for a night or two before moving on. Together with some 20 others from the Russian diaspora who favor the expansion of political and civil freedoms in their home country, the couple have been meeting, ferrying, accommodating and helping refugees to find more permanent solutions.

“I’ve lost count,” Anastasia said. “It happened on one day that we had about 30 people, and we managed to place all of them in different homes.”

Using her social contacts — and as a journalist, she has many — Anastasia is now running a veritable, if informal, organsiation to help refugees in Hungary. The country has seen nearly half a million people cross over from Ukraine, making Hungary only second to Poland in the numbers of people it is taking in.

Some were staying in Alexey’s music studio, which has bunk beds and a capacity for nine. A Pakistani-British friend had freed up rooms in his two-star hotel to take anyone Anastasia wanted to send.

“Perhaps some Russians are shy to go directly to the Ukrainian centre and offer help,” Anastasia said. “But if I write and say what is needed, they come forward and volunteer.”

In the midst of tragedy, there is humour.

Some Russians are experiencing shame and guilt over their country’s attack on Ukraine. Does Anastasia feel this?

“I’m not Putin,” she said. “I know who I am. I don’t associate myself with a maniac. But I guess the main question for all of us is whether we did enough to prevent this. Maybe we were full of illusions that under the legs of the cockroach, we could have a normal life. Perhaps we should have resisted more.”

But there is no time now to agonise. The phone rings again. Anastasia breaks off to give a quick consultation to a family who has encountered bureaucratic hurdles at the UK visa centre.

They come from Kharkiv, Irpin, Mikolaev. “Nobody yet from Mariupol,” Anastasia said, referring to the Sea of Azov port city under Russian seige.

The overwhelming majority are women and children, who have left husbands and fathers behind in Ukraine. In the midst of tragedy, there is humour. “The men back home are calling their wives, asking how to use the washing machine,” Anastasia said.

She has met some incredible characters. “There was a whole troupe of acrobats,” she said. “A girl who does fire shows. And a father and son who swam across the Tisza River from Ukraine into Romania and then came on to Hungary.”

Using her contacts, Anastasia has been able to find some long-term solutions for refugees beyond Hungary. In Spain, out of season, there are holiday lets and the possibility for Ukrainians to work in tourism. Anastasia gets friends on the ground to check that the conditions are decent.

But Ukrainians, hoping to return home soon, mostly prefer not to go so far from their own borders. One group has been lucky to be placed in a summer house at Hungary’s Lake Balaton that belongs to a Dutch couple known to the Russian diaspora.

In Budapest, Anastasia is looking for Ukrainian- and Russian-speaking teaching assistants to work with children who have been offered places in a Hungarian school, as well as a venue for Ukrainian teachers who want to run their own school.

As the war has disrupted her projects in Moscow, Anastasia sees a possible future for herself working with refugees. “My work is uncertain now,” she said. “Maybe in future I need to move in this direction.”

Anastasia understands why Ukrainians might hate Russians because of the war. “I understand and accept their anger,” she said. “It cannot be otherwise.”

But one Ukrainian woman told her: “Meeting you helped me not to fall into blind hatred.”