Fifty years ago in May ’68, angry students and workers brought France to a standstill in a bout of civil unrest that had a whiff of revolution. 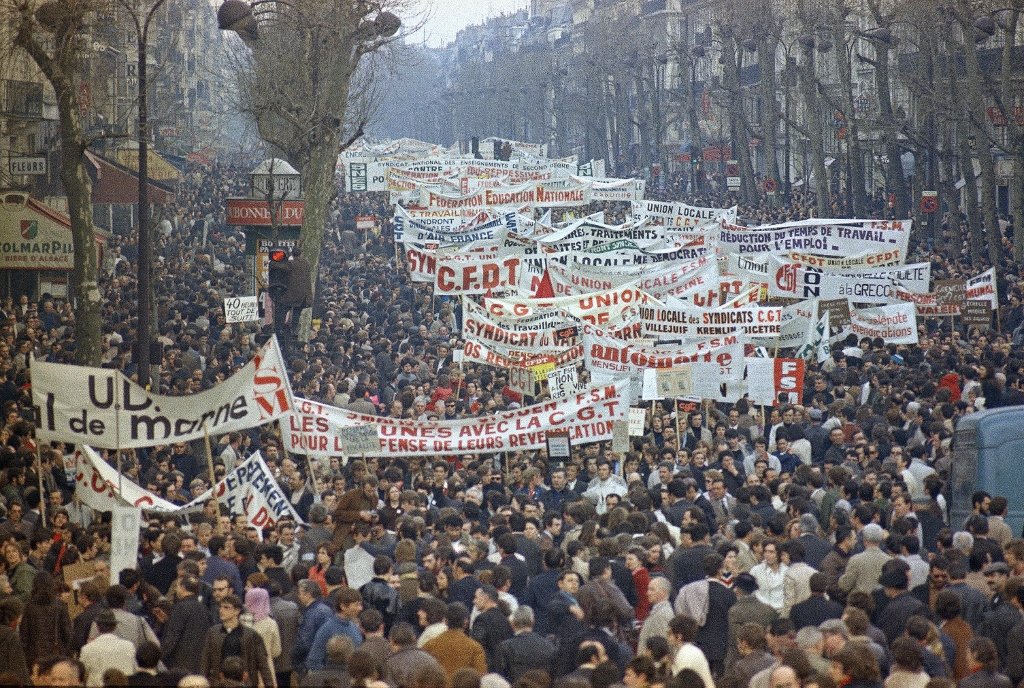 Students and workers demonstrate during a general strike in Paris, 13 May 1968
(AP Photo/Eustache Cardenas)

Fifty years ago today, angry students shut down part of the University of Paris, marking the start of weeks of civil unrest in France that represented a turning point in the country’s history. Below, Edward Mortimer, who was writing for The Times newspaper at the time, reflects on the events of May 1968. His article is part of a series on the 1960s by News-Decoder correspondents and guest writers that showcases their experience and broad perspective. We offer it in hopes that younger generations can learn from their elders’ experiences.

For me, May 1968 was certainly the high point of the sixties. I was 24. I had just got engaged. I had obtained, as my first job, the position of assistant correspondent in Paris for the London Times. In temperament I was still making the transition from student to journalist, and many of my friends in Paris were students.

The Vietnam peace talks had just opened in Paris. The American press and TV circus descended in full strength to cover the opening ceremonies, and then found nothing else to report.

“What about the riots in the Quartier Latin?” I suggested. “Yeah, the students. That’s a good story, but unfortunately it’s of no interest back home.” Away they went.

Two weeks later they were back: the whole of France was on strike, and de Gaulle had disappeared. There was, in the current revolutionary jargon, vacance du pouvoir. It was a beautiful morning, and the Communist trade unions were due to march. Rumour had it they might take possession of the Elysée in de Gaulle’s absence. Anything seemed possible.

A colleague, sent over specially from London, was invited to write a piece on the theme “France without de Gaulle.” “No,” he replied grandly. “I shall write the obituary of the Fifth Republic.”

Enough danger to make it exciting without being tragic.

No good pretending I was impartial. At home, I was a disillusioned Labour supporter, but I still thought of myself as left-wing. Although I admired de Gaulle for having got France out of Algeria, and agreed with his criticism of the Vietnam war, I was biased against him because he was keeping Britain out of the European Community (certainly the least of his crimes in the eyes of my student friends); because of his haughty and somewhat authoritarian style of government; because his government was, in conventional terms, right rather than left; because he was old and old-fashioned; above all, perhaps, because he had been in power for 10 years.

“France is bored,” Le Monde’s political analyst Pierre Viansson-Ponté had diagnosed only two months before. Whether or not it was true of the nation, it was true of the young – and of the political journalists. “Dix ans – ça suffit!” was certainly one of the most potent slogans of the would-be revolution.

Of course it wasn’t a revolution – although its leaders (some Marxist, some anarchist, some a bit of both) would have liked it to become one – any more than de Gaulle’s state was fascist. There was some police brutality – unnecessary beating with truncheons, use of tear-gas grenades in enclosed spaces – but remarkably few deaths. As far as I remember, I managed to count about 10, connected in one way or other with political events, in different parts of France between the beginning of May and the end of June: hardly enough to put a race riot in an American city on the front page that summer.

There was just enough danger to make it exciting without being tragic.

It was only three years later that I really understood the nature of what had happened, when I saw Ariane Mnouchkine’s brilliant play 1789, in which the original French Revolution is presented as a fairground drama, and the audience encouraged to play the part of the crowd.

When I noticed 16- and 17-year-old Parisians around me chanting slogans against Louis XVI, with real enthusiasm, I understood suddenly that this was what had been happening all over France in May 1968. A whole generation of French youth had, without realizing it, joined in a theatrical re-enactment of the great revolutionary journées of 18th- and 19th-century Paris.

When it came to political theatre, de Gaulle was the master.

I remembered one of my student friends at the beginning of “the events” (as they were always called at the time, and for a long time afterward) jumping up and down with excitement and saying, “It’s going to be the cops versus the students, it’s going to be like during the Algerian war. What we need is some wounded. What we need” – he grinned nervously – “is a few deaths!”

Of course. He had been too young to take part during the Algerian war. He had to have his revolution. And what do you do in a revolution? You tear up paving stones and tree gratings, and you build barricades – a complete anachronism when you are taking on the forces of a state that has aircraft and armoured vehicles at its disposal.

But, of course, de Gaulle had more sense than to use aircraft or armoured vehicles against students armed only with paving stones and perhaps the odd petrol bomb.

When it came to political theatre, he was the master – and he played his part beautifully, even down to the dramatic 24-hour disappearance when he went (as it was later revealed) to confer with the commander of the French armed forces in Germany. He arrived back and addressed the nation. The television was on strike, so he used the radio – which gave an extra dramatic touch, recalling his famous broadcast from London on June 18, 1940, urging the French not to accept Pétain’s armistice with the victorious Nazis.

He announced that he was dissolving parliament and calling a general election (thereby, in fact, granting the main immediate demand of the opposition, but making it sound like a decisive reassertion of his authority). He appointed the prefects (representatives of the state in the provinces) “Commissioners of the Republic” – a title that carried no specific powers but, again, recalled the administration he had installed at the moment of France’s liberation from the Nazis in 1944. And he asked the population to show him support, without mentioning that a mass demonstration carefully organised by his supporters was just about to begin.

Gasoline, which, supposedly because of the strike, had been unobtainable for 10 days or so, suddenly flowed like water, and most of France’s population drove off to the seaside for the traditional Whitsun weekend (killing, needless to say, far more of themselves and each other in the process than had died from any political cause in the preceding four weeks).

The crisis was over, except for a rather dull election campaign during which it soon became apparent that most French people over the age of 30 had been thoroughly alarmed by “the events” – especially, it was noted, by the fact that cars had been overturned and burned, which came to be seen as a kind of symbolic outrage against the material aspirations of the ordinary Frenchman – and that de Gaulle’s supporters would be returned with a landslide majority.

Edward Mortimer is a Distinguished Fellow of All Souls College, Oxford. Until 1998 he was a journalist covering international affairs, first for The Times, then the Financial Times. Later he was director of communications for the UN Secretary-General, and Chief Programme Officer of the Salzburg Global Seminar. In 2012 he wrote an assessment of BBC coverage of the “Arab Spring”.