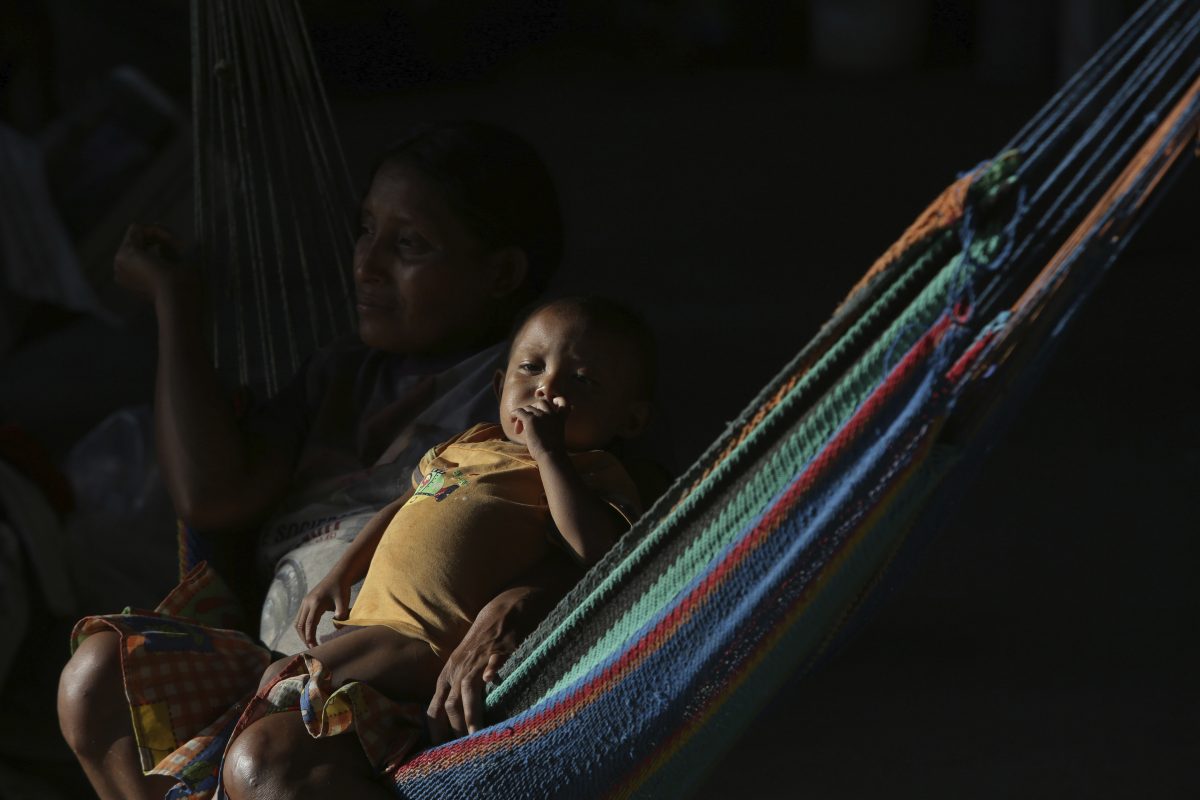 A woman and a boy, both Venezuelan refugees, sit in a hammock at a shelter in Pacaraima, the main entry point for Venezuelans in the Brazilian northern state Roraima, 10 March 2018 (AP Photo/Eraldo Peres)

As an angry mob throws clothes, bags and boxes onto a smoldering fire, the Brazilian man filming the scene unleashes a vitriolic attack on the Venezuelan refugees whose belongings are being burned.

“If there’s no government for us, we’ll make our own authority,” the man shouts. “Get out, Venezuelans!”

The scene took place in August, when simmering tensions between residents of the northern Brazilian border town of Pacaraima and thousands of refugees fleeing Venezuela’s economic collapse boiled over into open conflict.

Dozens of local residents, angry at an alleged robbery and assault by Venezuelans, attacked the makeshift camps inhabited by the refugees, burning tents and tearing down shelters. More than a thousand terrified refugees fled back over the border as Brazilians taunted them.

In another incident in recent days, hundreds more refugees fled back over the border after a Brazilian mob reportedly killed a Venezuelan in the Amazon region town of Boa Vista.

The violence is the most dramatic sign yet of the growing crisis that Latin America is facing as it struggles to deal with a mass exodus of desperate Venezuelans.

The United Nations International Organization for Migration says the situation is approaching a similar scale to that of the Mediterranean, with 1.6 million refugees estimated to have fled Venezuela since 2015, the vast majority of them to other Latin American countries. Some estimates suggest that 4 million Venezuelans have fled the country in search of a better life, more than 10 percent of the population.

At home, they face worsening hunger, a collapsed health care system, inflation over 40,000 percent and one of the world’s highest murder rates as the country with the world’s largest oil reserves continues its slow-motion catastrophe under the socialist government of President Nicolas Maduro.

Although the crisis has been steadily worsening in recent years, the acceleration in refugee numbers appears to have caught the region’s governments ill-prepared and lacking a coordinated policy.

While Brazil and Colombia have taken a liberal approach, several countries including Ecuador and Peru initially announced they would require Venezuelans to present a passport at the border, a document that has become increasingly hard to acquire in Venezuela.

With Venezuela’s economy continuing to crumble and Maduro stamping out political opposition, the crisis could get much worse before it gets better, testing the region’s — and the world’s — ability to form a coherent response. While the U.S. government has been quick to condemn Maduro’s socialism, it shows no sign of sharing the burden by accepting more Venezuelan refugees.

It will be vital for the region to adopt a consistent approach to asylum seekers, coordinate with international aid agencies and ensure that areas like Pacaraima have sufficient funds and security to cope with the economic and social disruption.

As Venezuela’s problems become Latin America’s problems, the crisis is also likely to spur the region into a more unified front against Maduro’s increasingly authoritarian government. Still, its ability to influence Venezuela seems minimal, and there is a shared reluctance to take a more interventionist approach in a region scarred by a history of U.S.-backed coups.

The crisis could have the biggest impact on regional giant Brazil.

Without a robust policy response, the influx of refugees could have a major impact on several countries. It comes at an economically sensitive time for the region, where previously strong growth fueled by commodity prices has cooled to a more sluggish pace. Areas already lacking jobs and social services are fertile grounds for breeding resentment against newcomers.

The modern scourge of fake news is fanning the flames. In Pacaraima, the violence was preceded by false stories widely circulated on social media sites and messaging apps claiming that the refugees would be able to vote in Brazil’s upcoming elections.

The desperate Venezuelans make a handy scapegoat for politicians seeking to tap into xenophobia and isolationism, a trend that has been gaining steam globally.

In Peru, a conservative candidate for mayor of the capital Lima has condemned the “hordes” of Venezuelans being allowed into the country and blamed them for a rise in crime.

The crisis could have the most immediate and significant impact on regional giant Brazil, which is stumbling toward a chaotic presidential election in October.

With leftist former president Luiz Inacio Lula da Silva jailed on corruption charges and barred from running, the current front-runner is a former soldier dubbed “the tropical Trump” for his populist, anti-immigrant stance.

Jair Bolsonaro has been quick to seize on the border chaos, even though the number of Venezuelan refugees is minuscule compared to Brazil’s 207 million population. Last month, he said Brazil should close its borders to the refugees and call in the UN to set up refugee camps.

“It’s as if you knocked down the doors and windows of your house,” he said of the current policy. “You are asking to be robbed.”