Wanted in Shanghai: A marriage partner

Away from the hustle, an ancient rite unfolds in a Shanghai park. Parents looking to hitch offspring post want ads in a marriage mart. 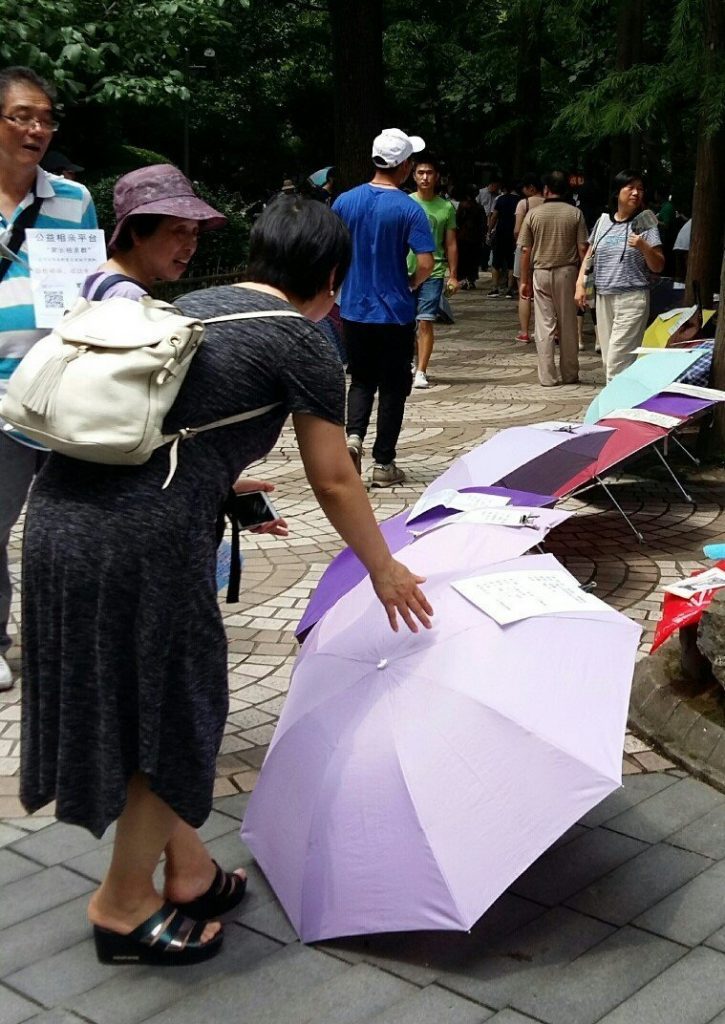 It’s a poignant ritual, played out every weekend in a shady corner of a Shanghai park.

In People’s Park, scores of umbrellas are unfurled and arranged neatly in lines along the side of pathways. Attached to each umbrella is a sheet of paper spelling out the personal details, qualities and aspirations of the grown sons and daughters of the umbrella owners. Groups of the parents stand by, chattering cheerfully.

Those described in the ads have one thing in common: they are single.

The parents are promoting their offspring in the hope — most often a vain one, apparently — of finding a spouse for them.

As in almost all countries and cultures, matchmaking has a long history. In China, it stretches back to the ancient mists of time.

There and elsewhere, arranged marriages were the widely accepted pathway for couples to tie the knot. Young people themselves didn’t decide who The Perfect One was. Their families did, based on criteria that often had little to do with love and romance.

It’s a tradition that not only survives but thrives in many cultures. Estimates of the numbers of arranged marriages vary globally, but the generally agreed figure is more than 50% of all marriages.  The proportion is higher, for example, in India.

But in an era of online dating, as dating agencies vie with each other to assist the lovelorn to find partners, the simple, low-tech weekend institution in the Shanghai park seems anachronistic, to put it mildly.

It is utterly at odds with Shanghai’s image of a hustling metropolis, hell-bent on pursuing the trappings of modernity.

Marriage markets can be seen as an end result of population planning.

But similar marriage markets exist in many major Chinese cities. The one in Shanghai — reportedly the largest — began in 2004.

Their continuing existence can be seen as one result of China’s one-child per family policy, introduced in 1979 to control population growth in the world’s most populous nation. The policy, recently dropped, was the world’s most extreme example of population planning.

Because of a traditional preference for boys, the policy led to an imbalance of the sexes. According to the CIA World Factbook, in China there were an estimated 116 males per 100 females between the ages of 0 and 14 years in 2018, and 115 males per 100 females for those between 15 and 24 years of age.

That, of course, poses a challenge for male millennials looking for a female partner. But many of the ads in the park were about marriage-seeking females.

Is quiet, comely, decorous and cheerful

The one-child policy was dropped in 2015. But the policy shift has little bearing on the many married couples who today have a sole child: they don’t have the comfort of being able to count on a large family to support them in their declining years.

No names were given. The household registration, or hukou, that is listed is all important. The hukou is a key identification document that gives holders access to education, health care and other benefits. A rural hukou is useless in cities. The system puts China’s hundreds of millions of migrant workers at a severe disadvantage.

One of the ads, on a yellow umbrella, read as follows:

Looking for a Boyfriend

Has no romantic past

Is quiet, comely, decorous and cheerful

Holds a Bachelor’s degree; earns monthly in excess of RMB10,000 after tax

Seeking a man who is a dutiful son, a non-smoker and non-drinker who doesn’t have any unhealthy hobbies or habits and who is at least 1.72 m tall

A second notice, on a maroon-colored umbrella, was as follows:

Shandong (province) male, born September 1989, is 1.8 m tall, a Bachelor’s degree holder, holder of a certificate to practice law, a civil servant with Shanghai hukou, a home owner who also owns a car

A man of fine character, who is honest and kind and has no unhealthy hobbies or habits, who has a strong sense of responsibility towards family and is constantly striving for career advancement

Both parents are retired

Seeking a woman who has at least a full-time Bachelor’s degree, who is at least 1.65 m tall, has a stable job and is well-educated and well-mannered

One obvious question: What is the success rate of these ads?

The hopeful elders in the park, who were happy to speak with me and my wife, Betty Fu, admitted that it was very low.

Many young people have their own agenda.

Our impression was that for many of the elderly people who were present, the gathering was like a regular social get-together — a support group meeting to exchange views and gossip.

However, their hopes of finding mates for their offspring cannot be encouraged by new official figures showing falling marriage numbers.

According to China’s Ministry of Civil Affairs, marriages hit an 11-year-low last year. Increasingly, China’s younger generation is avoiding or at least waiting to tie the knot.

More young people now have their own agenda, and they are no longer at the beck and call of their parents. Unlike in days past.