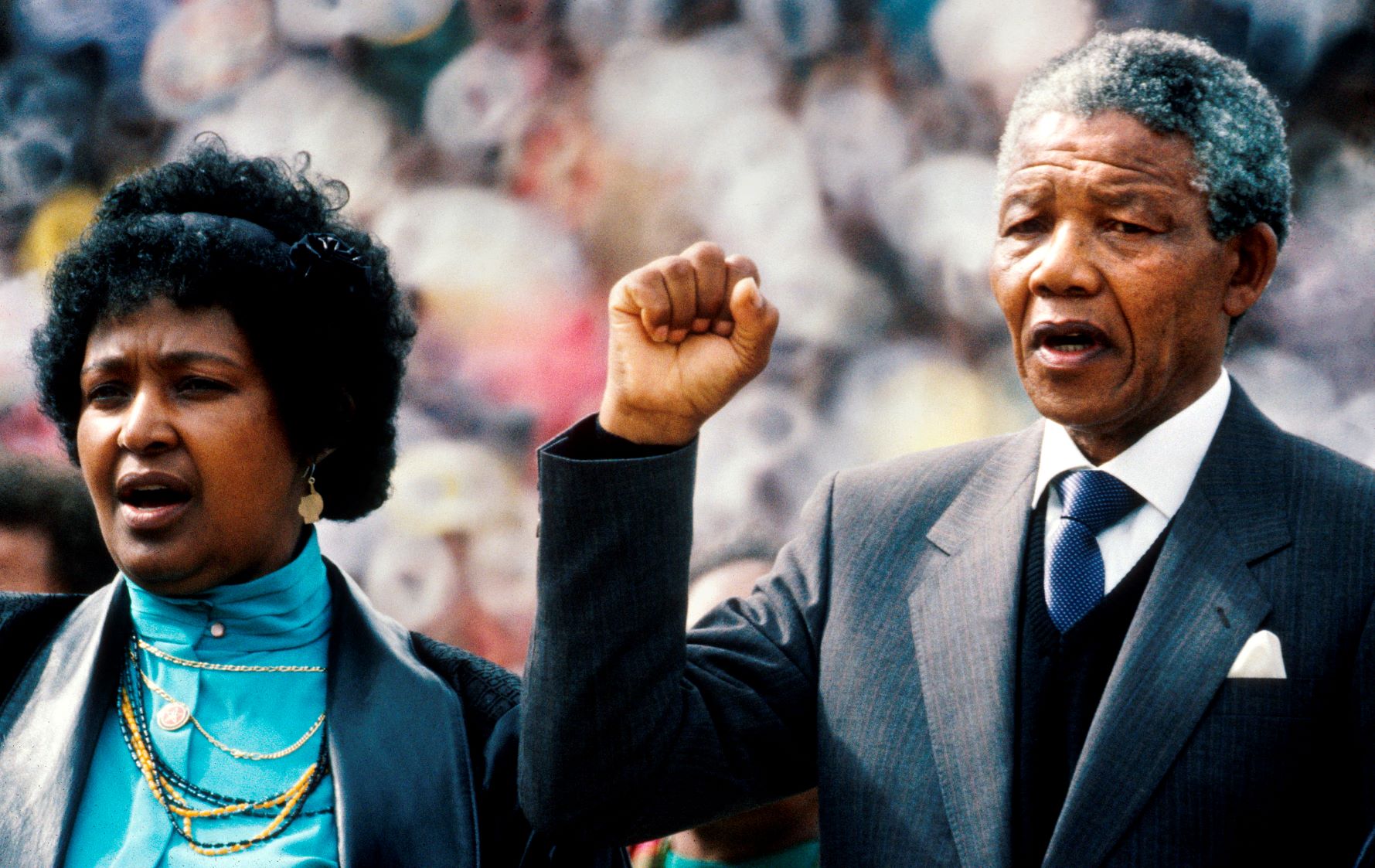 Nelson Mandela with his wife Winnie Manela, two days after he was released from prison, in Soweto, South Africa, 13 February 1990 (EPA/STR)

Jonathan Sharp was chief correspondent in Johannesburg for Reuters News in 1990 when Nelson Mandela was released from prison.

February 11, 1990 was truly a turning point in the history of South Africa.

For decades the nation at the southern tip of the continent had been pilloried by much of the rest of the world. This was because of its apartheid racial segregation laws that hugely favoured the white population over the far larger and mostly black majority.

Apartheid means “separateness” in Afrikaans, the language rooted in Dutch that evolved when the country was a colony.

By 1989 — itself a remarkable year for the wave of revolutions in communist East Europe — South Africa had made significant steps in its effort to end its pariah status. International sanctions were costing it dearly economically, culturally and in sporting terms.

As a taste of events to come, the government freed senior figures in the African National Congress (ANC), the exiled organisation waging a low-level guerrilla campaign against apartheid.

A favourite weapon of the ANC was small mines. One of them exploded in a shopping mall in the commercial capital Johannesburg just as I had finished shopping there and was safely in the mall’s car park.

But there was no word when ANC leader Nelson Mandela — who ultimately spent 27 years incarcerated, much of it in an island prison — would be freed.

Lawyer Mandela entered the world stage with a famous speech at his 1963 trial for sabotage acts against the state in which he stated that freedom and equality were “an ideal for which I am prepared to die.”

Assassinations of opposition figures were common.

Releasing Mandela from prison was a key card that South Africa could play to regain respectability, and the government would play it “soon,” Anton Lubowski, an anti-apartheid activist and human rights advocate, told me.

Lubowski did not live to see his forecast fulfilled. In September 1989, gunmen pumped AK-47 rifle rounds into him, with the coup de grace a pistol bullet. He was the latest in a long list of opposition figures in southern Africa to fall victim to unnamed assassins.

Knowing that Mandela was expected to be released — his freedom would be a huge news story — but not knowing how or when it would happen was particularly frustrating for a news agency reporter like me.

Reuters and its rivals compete tooth and nail to get stories first, and to get them right. Being just one minute behind another news agency on a major story rates as a failure.

What I dreaded most was that Mandela would be released from prison unannounced, just as his ANC colleagues had been. This possibility made it necessary for me and my colleagues to be constantly alert, straining to catch the first authentic information.

The problem was that, then as now, the pressure to get hard information was compounded by a fog of fake news and hoaxes, saying that the release of Mandela was imminent or indeed had actually happened.

Would anyone recognize Mandela?

These claims were typically relayed on pagers, the messaging devices of the pre-smartphone age. Such messages, no matter how bogus-sounding, had to be checked. This took time and energy and shredded nerves.

It was one such scare that prompted reporters to flock to an exclusive clinic outside Cape Town where Mandela was known to be undergoing treatment.

It was then that another problem surfaced: Nobody among us knew what Mandela looked like after his marathon spell in prison. There had been no pictures of him. Would we even recognise him if he walked out of the clinic?

The hilarious result was that every black man leaving the clinic — whether porter, delivery man, cleaner or whatever — came under intense scrutiny from the ranks of the world’s press assembled outside.

But on the timing of the release, I had a lucky break. A local journalist friend introduced me to a senior member of a secretive police unit who was willing to share with me whatever information he had on when Mandela would be a free man.

The police official’s name was Vic — I did not then know his full name. But he was no fake policeman. He introduced me to his staff in his offices, which were in a shopping arcade concealed behind what looked like a plain mirror but was in fact also a door.

We could verify fake claims.

All cloak-and-dagger stuff. With enormous lack of originality, my Reuters colleagues and I referred to Vic as our “Deep Throat,” the pseudonym of the informant who provided Washington Post reporters Bob Woodward and Carl Bernstein with information about the 1972 Watergate scandal.

Some time in the latter half of 1989, Vic told me in the less than cloak-and-dagger setting of a Holiday Inn coffee shop that Mandela was likely to be released in January or February of 1990.

This was not precise information, but at least it was better than anything that I had, or apparently anybody else in the news business.

In later meetings, Vic refined the information without disclosing the exact day of the release, which apparently was known to just four people in the South African government.

One of the ways Vic was valuable to us was that whenever a fake claim about Mandela’s whereabouts surfaced, I could call him, day or night, to check. And it was Vic who told me on February 10 that “it looked like” Mandela would be a free man the next day.

And so it proved.