Japan’s Okinawa is rediscovering its roots. But the renaissance doesn’t ignore foreign influences, and in the kitchen, there’s a revival of hybrid cooking. 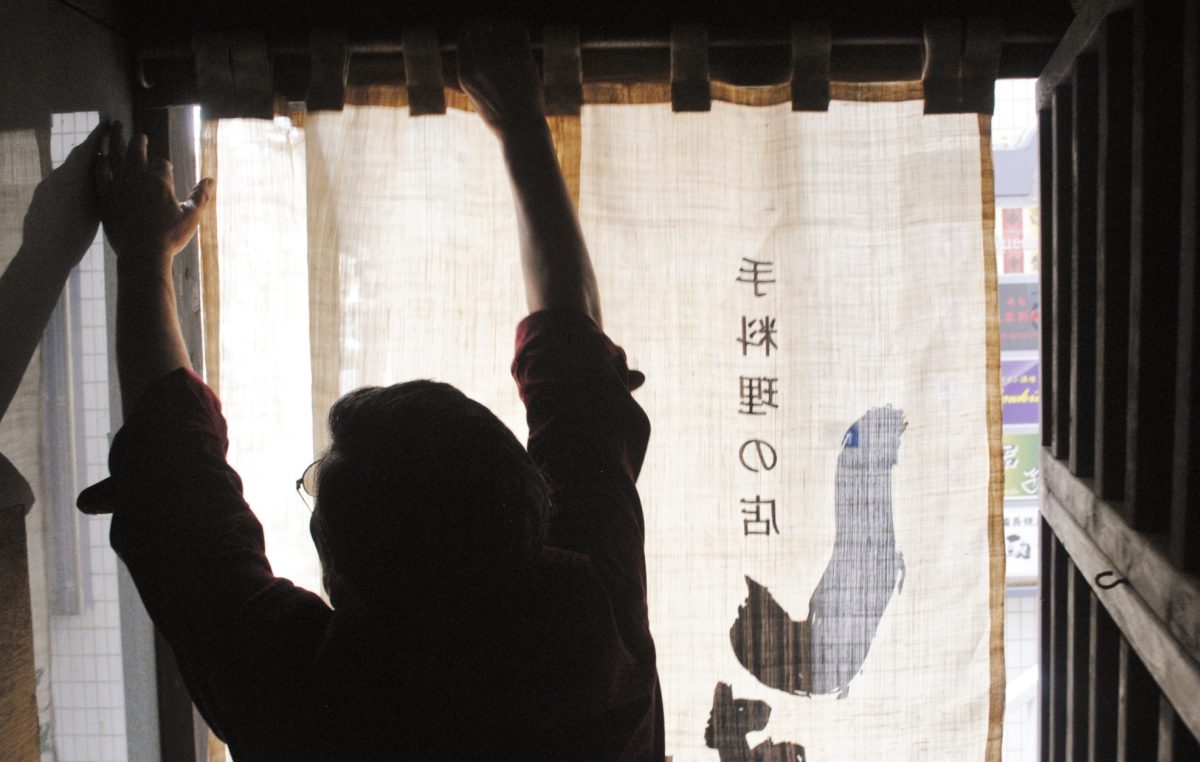 Hiyana Tatahiko places a noren, or piece of fabric, at the entrance to the restaurant “Shimu,” which specializes in traditional Okinawan cuisine. (Photo by Cody Thompson)

Cody Thompson, a student at Indiana University, recently traveled to Okinawa, Japan, to report on the influence that the U.S. military’s presence has had on culture there. Here is his report on the revival of American-Okinawan-Japanese food traditions.

OKINAWA, JAPAN — The cook dumps several cups of flower into a plastic bag, ties the top and shakes. The powder coats the inside of the bag. She breaks the eggs and sprinkles the salt. She’s making Okinawa soba.

Then she adds the ingredient she says really differentiates the soba from ordinary Japanese cuisine.

But those looking for the same diet of 1,000 years ago — the diet of the Ryukyu people — will be disappointed. Even the most authentic examples have not evaded the intrusive U.S. presence on the island. This is a revival. But it’s a revival of a hybrid cuisine.

“We call it the Okinawan boom,” said Tomoaki Goeku, owner of “Taste of Okinawa” in Naha, the capital of the prefecture.

Fusion food has always been an Okinawan staple.

“Taste of Okinawa” is what Goeku calls a cooking experience that specializes in teaching foreigners and even locals how to cook traditional Okinawan food. Goeku opened the location six months ago, aiming to capitalize on the influx of tourists to an island that is commonly referred to as “The Hawaii of Japan.”

The building, much like the food, is a fusion of old and new. “Taste of Okinawa” is tucked in a sprawling, old-fashioned marketplace where vendors haggle with customers. The cooking experience has tables and counter tops with dark-stained wood and stainless steel appliances.

This is where Yu, with help from other chefs and Goeku, teaches the classic recipes and complicated history of Okinawan cuisine.

For centuries Okinawa established a mutually beneficial relationship with its neighbors — China, Taiwan and Japan. Okinawan chefs would visit the other countries to study their cooking techniques and apply them to their own cuisine.

Because of this, fusion food has always been an Okinawan staple.

U.S. soldiers offered a steady stream of goods like Spam.

In 1879, Okinawa was annexed by Japan, and afterwards many of the traditions were stripped away — language, clothing and food among them. The food fusion continued to develop.

On April 1, 1945, the United States launched The Battle of Okinawa, the deadliest battle of World War Two in the Pacific, which killed more than 100,000 Okinawan civilians and decimated food supplies. Memorials and artifacts dot the small island.

After securing victory on the island, U.S. soldiers placed survivors in camps. They offered them a steady stream of U.S. goods like Spam — canned cooked meat that became a part of the U.S. soldier’s diet in World War Two.

Preserving traditional food culture wasn’t high on the list of priorities after such a devastating event, so the U.S.-provided goods eventually worked their way into the Okinawan diet.

Seventy-two years later, there are U.S. military helicopters flying overhead, tanks stopping traffic to pass through busy intersections and an A&W restaurant promising “all-American food.” There’s Spam and taco rice, which is taco-seasoned hamburger piled atop a bed of rice, at almost every shop. Many think of both as traditional Okinawan cuisine.

Nearly every item in this market is locally grown.

Yu tells her students that the dough must have time to rise. Normally it would be set atop an oven, but in the interest of time she puts it into a microwave that speeds the process. During the wait, Goeku takes the students to the food market a few blocks away.

There’s a hanging sign, and written on tape below the Japanese characters are the English words “Makishi Public Market.”

Instantly, an overwhelming smell hits me — meat, fish and scallops. The place is a sprawling labyrinth of low ceilings with exposed pipes, people cluttering the halls and a massive amount of food — all Okinawan.

Nearly every item in this market is locally grown. Many vendors offer free samples of scallops, which are very bitter when they are dipped into a dark soy sauce. Another vendor offers samples of brown sugar tsukudani — Okinawan squid. They are shredded into thin, purple strings.

The tsukudani was sweet and had a similar consistency to beef jerky. The brown sugar version was labelled Orion — the same name as the locally brewed beer available almost anywhere in Okinawa.

There are families doing their grocery shopping, elderly haggling with the vendors and a mainland Japanese school field trip. The girls snap pictures of the fat pig heads — a common sight in Okinawa.

“Okinawans eat every part of the pig except the nose.”

Goeku seems to know many of the vendors, laughing with them when he approaches their stands. He buys fish cakes, warm yogurt-like tofu and squid for his students, and drops several coins into the vendors’ palms.

As he strolls around the market, he describes some of the differences between Okinawan food and other cultures.

People often assume Okinawans, being by the ocean, eat mostly fish, he says. Not true! He then quickly explains that the prefecture was very poor for a long time, so Okinawans ate plenty of pork for its nutritional value.

As he speaks, a man wheels a cart with half a pig, cut from head to tail, laid out on its surface.

“Okinawans eat every part of the pig except the nose,” he says.

Goeku is a bit of a traditionalist. In the market, he is eager to explain the seafood, pork and seaweed dishes to his students, but he passes the tables with Spam and ingredients for taco rice without mentioning them. Once out of the market, though, the McDonalds, A&W and other American-themed restaurants are obvious, and he is unable to ignore them.

“Our eating diet has been changing,” he said.

“Nowadays we’re too lazy and don’t shred them ourselves.”

Goeku was born in Okinawa, but he worked in business in Tokyo for 10 years. Two years ago he decided return to the prefecture to launch his business after attending a similar class in Jordan.

He approaches a small shop selling what appears to be blocks of wood on a table. They are super-dried tuna fish called katsuobushi. He places a couple of coins in the hand of the woman working, says something to make her laugh and then watches her drop the fish block in a giant machine that roars to life. After a few moments, thin bonito flakes fly out the bottom.

“Nowadays we’re too lazy and don’t shred them ourselves,” he said, pointing to an old-fashioned box used for shredding the fish manually.

The bonito flakes are often used to garnish other popular dishes. When near heat, they wave back and forth, causing some tourists to recoil, fearing their food is alive.

Shimu. Or kitchen in Okinawan.

Hiyana Tatahiko unfurls the fabric sign to the restaurant and jams it between the door frame like a shower curtain. The thin fabric lets the light from the afternoon pass through, but it’s still easy to make out the symbol for “Shimu.”

The restaurant is easy to miss; it’s tucked into the side of a building in Naha, the capital of the prefecture. The restaurant is one of many hidden alcoves that still serves authentic Okinawan food. These places can be hard to find unless one knows where to look.

Kushimoto Rumiko started “Shimu” 35 years ago with her friend, Tatahiko. She still cooks in the same two-foot by five-foot kitchen that is separated from the restaurant by only a counter. She never went to cooking school. Her restaurant focuses on recipes her mother taught her, many using fatty pork that is common in Okinawa.

“Some cooks like to use lots of different ingredients,” she says. “I like to keep things simple.”

The aroma in the room is a mixture of flowers decaying on the counter, fresh-made jasmine tea and fish. She’s making one of her most popular dishes — an Okinawan staple — goya champuru. It’s a mixture of bitter melon, eggs, tofu and pork. Sometimes Okinawans use spam instead of pork.

The ingredients sizzle while she stir-fries them together in a pan. Her movements are quick, experienced. The kitchen quickly fills with smoke and the smell of the mixing elements.

“Shimu” is about a five-minute walk from Kokusai Dori, also known as international street. It attracts tourists from mainland Japan and other places around the world. There are trinket and souvenir shops, tourist traps, bars and restaurants along the two-kilometer stretch.

The street is wide and often crowded with people. But it wasn’t always that way.

“When the U.S. air force came, they built the road,” Tatahiko said. “It used to be nothing. Then they made that road, and it’s no good.”

“Okinawa has a unique food culture. Why not promote that?”

The soba was ready. A visitor with Yu had made it using tender boiled pork; the bonito flakes they picked up from the market earlier; some kamaboko, fish cake; soy sauce; and a pinch of mirin, rice wine similar to Japanese sake but with a higher sugar content.

The deep brown lacquer bowl with flowing gold leaves painted on the side is warm, and the steam rises up into my nostrils — the smell is its own reward. The noodles, like much of the food in Japan, are bland without the broth, which is both salty and sweet. The meat, while fatty, melts off the bone in the liquid. Chopped green onions dot the surface, along with the kamaboko.

Like the revival, Goeku’s experience mixes old with new. It brings in locals and tourists alike.

“Okinawa has a unique food culture, which we can be proud of,” Goeku says. “Why not promote that to the world?”

Cody Thompson is an undergraduate student at Indiana University, concentrating in Journalism, International Relations and French. Campus Editor at the Indiana Daily Student, his favorite writers include Wright Thompson, Eli Saslow, Ernie Pyle and Jack London. He enjoys reporting on complex cultural interactions and controversies, and aspires to become a foreign correspondent.

Share This
WorldAsiaJapan’s Okinawa rediscovers its roots in fusion cooking