Boxing is back in center ring 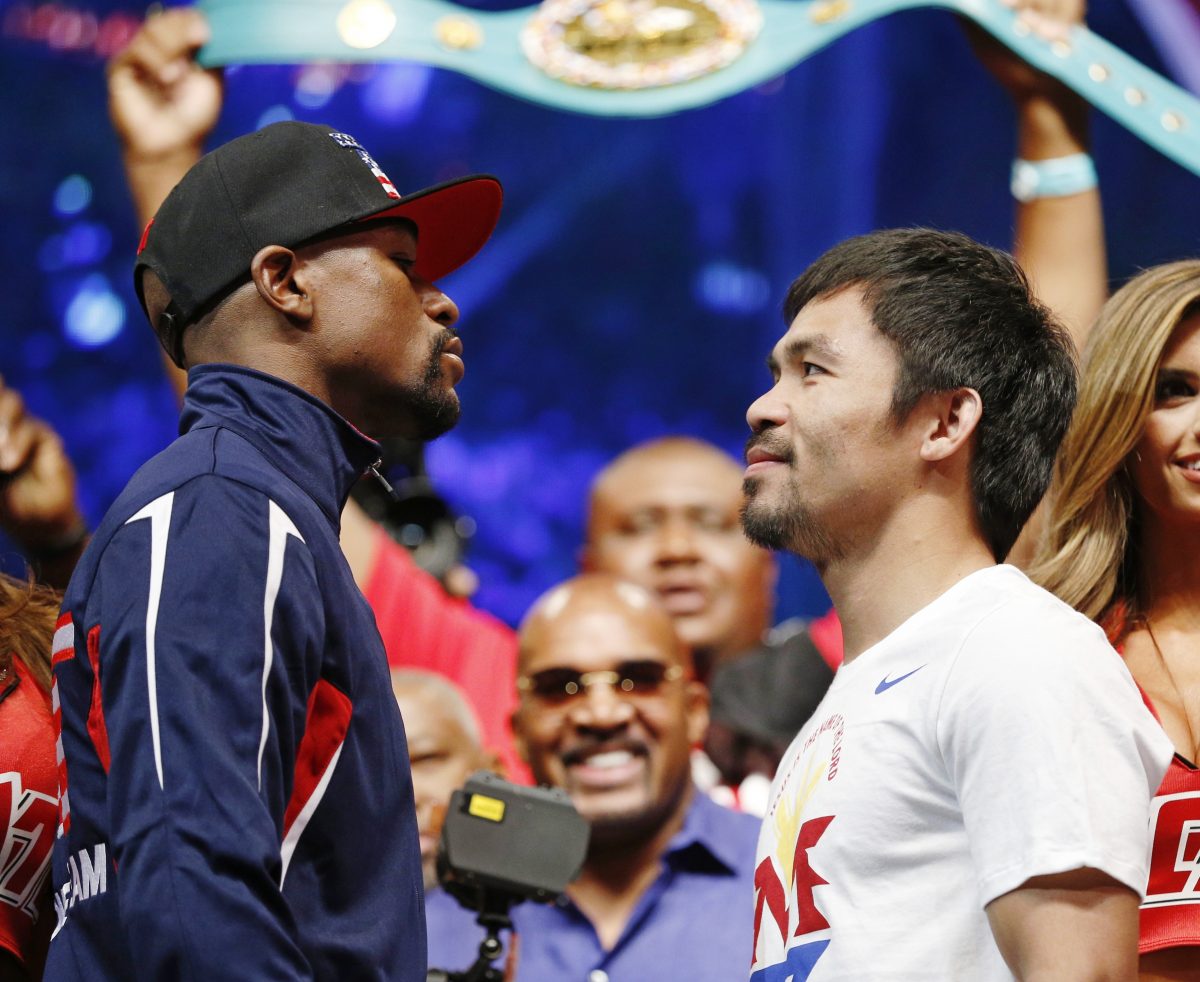 Floyd Mayweather, left, and Manny Pacquiao pose during their weigh-in on May 1, 2015 in Las Vegas. (AP Photo/John Locher)

Just when professional boxing is slipping into what many feel would be well-deserved oblivion, a prize fight combining elements that make the sport both compelling and repellent will be staged this week in Las Vegas.

The gambling center of the world features American Floyd Mayweather and Filipino Manny Pacquiao in a 12-round fight on Saturday night for the undisputed world welterweight title and the richest purse in history, estimated in excess of $300 million, mostly from television rights.

Mayweather, 38, is unbeaten in 49 professional fights in five weight divisions. Pacquiao, two years younger, has lost five times in a steady progression through the divisions as he destroyed one big name after another.

Pacquiao is a southpaw who leads with his right hand, throws punches with reckless abandon and seeks an early knockdown. Mayweather is a counter-puncher who dodges his opponent’s blows while calculating his moment to strike.

In classic tradition, both fighters come from the streets.

Pacquiao left school at 10, sold cigarettes on the sly and took up professional boxing at the age of 16. Mayweather was one of six children brought up in a single room in New Jersey by a drug-addicted mother.

Their life stories then diverged.

Pacquiao is a national hero and an elected politician in the Philippines. Mayweather is a walking symbol of unabashed conspicuous wealth estimated by Forbes magazine to be the best paid athlete of 2014 and possessing a white fleet of cars at his Florida mansion and a black fleet in Las Vegas.

He has had convictions, arrests and citations for violence against five women in seven incidents over 14 years. The Nevada State Athletic commission has not withheld Mayweather’s licence, saying he paid his debt to society by spending two months in a Nevada prison in 2012 for violence and battery.

With its violence and documented connections to organised crime in the first part of the 20th century, boxing has long held a visceral fascination in the United States.

It has inspired some wonderful literature from Ernest Hemingway, Norman Mailer, Joyce Carole Oates and The New Yorker journalist A J Liebling, whose book “The Sweet Science” is considered one of the top sports reads of all time.

There was a time when the great fights, mostly in the heavyweight division, would transfix the world and transcend sport.

Joe Louis’s victory over German Max Schmeling in 1938, the year before the outbreak of World War Two, to avenge a defeat two years earlier was widely viewed as a victory by democracy over fascism.

A generation later Muhammad Ali became a symbol for an era when he refused to be drafted into the Vietnam war.

Ali fought two unforgettable bouts against Joe Frazier and one against George Foreman but has suffered from the crippling effects of Parkinson’s syndrome for more than 30 years after too many blows to the head.

Pacquaio’s trainer Freddie Roach is a fellow sufferer after estimating he received three punches for every one he threw in his boxing career.

Like bull fighting, boxing has steadily declined in popularity in many countries. The bull fighting ban even extends to the Catalonia region of Spain, the country where Hemingway became a passionate aficionado in the 1920s.

Spectators are less keen to watch a spectacle where an animal is killed or in the case of boxing where the aim is to batter one’s opponent senseless.

Confusion caused by four separate governing bodies has not helped boxing. Nor has the absence in the United States of a good American heavyweight since Mike Tyson’s heyday late last century.

Excitement around Saturday’s fight centers on the excellence of the opponents, reminiscent of the 1980s when middleweights Sugar Ray Leonard, Roberto Duran, Thomas Hearns and Marvin Hagler staged some memorable fights.

Mayweather has not been defeated since he joined the professional ranks after the 1996 Atlanta Olympics. That’s an achievement that was never matched by Ali, Louis or Sugar Ray Robinson, who is commonly regarded as the best pound-for-pound boxer ever.

This week Mayweather made further headlines when he said he was greater than Ali, a claim impossible to prove or disprove in a different era and weight divisions.

What is certain is that he needs to win on Saturday to confirm his place in history.