Volunteers on a mission to help Syrian refugee children ended up in the middle of an attempted coup in Turkey. They drew inspiration from the orphans. 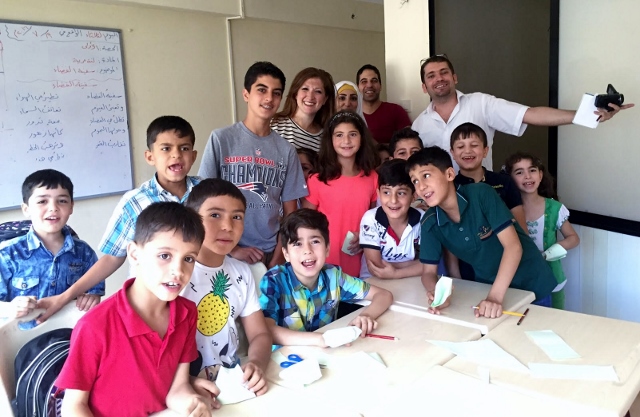 (Photo courtesy of the Karam Foundation)

Last month, a team of volunteers from the Chicago-based Karam Foundation was on the verge of starting a week-long mission to help young Syrian refugees in southern Turkey when a military coup erupted against Turkey’s ruling regime.

Some of the volunteers never made it to Turkey because of security concerns, which ended up forcing the foundation to cancel the mission. Those who had arrived before the coup erupted, some just hours before it started, decided to improvise and do what they could in a few days to help Syrian children.

Yesterday we published two volunteers’ accounts of their work in Turkey that week. Today we publish four more — from Karam Chairman Omar Salem, his two sons and the daughter of Karam CEO Lina Sergie Attar.

“Muaaz could not hide his smile.”

Our family arrived in the early evening of the night of the coup. With me were my wife, Zeina; our two sons, Hussein (14) and Jad (12); and our daughter, Maya (4). The plan was to spend the night in Istanbul and in the morning head to Rehanli in southern Turkey.

After a quick dinner, we headed back to our hotel. With my wi-fi now active, I saw messages pouring in from people asking how we were doing and checking up on our children. We had no idea what was happening around us until I turned on the TV. Then a little later we started hearing fighter jets, helicopters and “sound bombs” — explosive devices to disorient an enemy’s senses.

Two things came to mind. What will happen to the three million Syrian refugees living in Turkey? They will be the easiest target of everyone in Turkey. And what will I tell my boys, who in the span of a few hours that day had seen how a Muslim, democratic country has managed to preserve its heritage and build a modern, westernized country while protecting the rights of every citizen?

Zeina and I spent a very tense and scary night glued to our smartphones and watching the news until sunrise, when things seemed to calm down.

The next day, we decided to visit families whose children do not go to school. We stopped at the Fatih Mosque to speak to the children selling bottled water. They were all Syrians. Two of them — Muaaz and Tarek — were both 12 years old, and neither attended school.

We asked the boys to tag along with us. Muaaz took us to his family’s one-bedroom basement apartment, where he lives with his two older brothers and his elderly grandmother. Muaaz’s parents are divorced and live in Damascus.

We spoke to the grandmother for about an hour, and she accepted our offer to sponsor Muaaz’s education and that of one of his brothers. Muaaz could not hide his smile, and I certainly will not forget it.

“The Syrian kids inspired me to be positive and grateful.”

At Istanbul’s airport, between gunshots and sonic booms outside, everyone was terrified of what was happening. We had literally landed in the middle of a military coup! We were panicking and nobody knew what to do — not even the grownups!

When I returned to the U.S. from Turkey, the question that people asked me most was, “Was it scarier for you because you were a kid?” My response was that it doesn’t matter how mature you are, it matters how brave you are. If you were an adult, wouldn’t you be scared too?

After the ordeal at the airport, I was given a chance to help others. We worked at a Syrian refugee school for orphans in Istanbul. I realized I was so lucky. The kids at the school have lost parents, their homes and all of their belongings, yet they still manage to keep a smile. They inspired me to always be positive and grateful — and not fight with my sister.

“I realized the kids saw me as no different from them.”

My experience in Turkey was great. Turkey is an amazing place with great people, great cuisine, extraordinary history and culture.

I arrived in Istanbul, Turkey the day of the military coup attempt, and surprisingly I didn’t get affected. I wasn’t scared at all because I knew it was going to be a failed attempt.

While in Istanbul I went to a Syrian orphanage school. I was pretty nervous that the students would not like me. I am Arab and I am Syrian, but I’m also American. I thought they wouldn’t like a Syrian who has been Americanized and who lives in a country that hasn’t done much good to that region of the world.

When I got there, I realized the kids saw me as no different from them. We were all Syrian and spoke the same language (although I obviously not as well as they do).

At the end of activities including origami, four kids gave me their drawings. At first they were kind of shy, but in the end they opened up to me and to the others helping out.

The kids were all really nice to me, and I hope to return to this school next year and see the kids and teachers again.

“Seeing them dream big made me happy.”

During my trip to Turkey there was a military coup, but I did not feel it at all because I slept through it.

While there, I went to an orphanage for Syrian kids. At the orphanage we did many different activities like art, dental hygiene and trust games. Many of the kids at first said that they couldn’t draw, but as they started to do it, they realized they could.

The kids said that when they grow up, they would like to be pilots, doctors, athletes, teachers and so on, and seeing them dream big made me happy. It felt good to see them having fun and smiling despite the things that have happened to them.

I would like to revisit that same orphanage in the near future.