In Tito’s Bunker: Reflections on My Blind Spots

A hallway in Tito’s bunker is home to an art installation of broken mirrors. (Photos by Diana Montaño)

As the guide led us through the dimly-lit concrete tunnels of Josip Broz Tito’s socialist era military bunker, I pieced together fragments of my American education.

The bunker, an underground compound able to hold more than 300 people in the event of nuclear war, had been secretly dug into a Bosnian mountainside during Tito’s reign as president of Yugoslavia.

As surreal was the fact that I — a History student at university, international journalist and supposed critical thinker — could not conjure up any significant knowledge of Tito, a once-larger-than-life Cold War statesman still remembered fondly enough in Bosnia to inspire a kitschy Sarajevo café.

This was one of the biggest “aha” moments of my life.

A communist victory over the Nazis had definitely not been a part of the lesson plan.

World War Two is one of the most-taught wars in U.S. schools. Every year of my secondary education had an entire section devoted to this war.

Yet I could recall only bullet points: the Holocaust, taught without mention of the Roma, Serbians, communists or homosexuals in concentration camps; U.S. soldiers landing in Normandy; the United States helping rebuild Europe through the Marshall Plan.

How could I, a well educated young person, ignore an essential piece of Cold War history, a key to grasping the roots of 1990s ethnic conflict in the Balkans? Had I not paid close enough attention in class (although in my defense, I was a good student and once received a top grade on an assignment about Kristallnacht)?

Because I moved to the United States as a child, I often hesitate to think of myself as fully American. But as I wound through that underground tunnel in the Bosnian countryside, I realized how truly American my perspective is; how American I am. 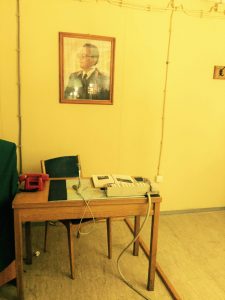 Tito’s portrait over a desk in the military bunker in Konjic, Bosnia.

Though educated, I walk the world with blind spots that are a product of my upbringing. And I do so without realizing it.

I took a step back and wondered what this blind spot implied for my understanding of Bosnia.

Tito’s glory came at the tail end of World War Two: the military victory of communist Yugoslav partisans over the Germans, which led to the establishment of the Federal People’s Republic of Yugoslavia.

But in my education, World War Two was taught as “How the Americans Saved Europe — and The Rest Of The World — From Their Own Demise.”

My post-Cold War 1990s education made little mention of figures like Tito and emphasized instead the disintegration of communist regimes after the fall of the Berlin Wall. The story of communists defeating Nazis did not mesh comfortably with the U.S., capitalist, Super Power narrative.

Education instills narratives into our minds. We need to acknowledge our blind spots, products of our education and our identities.

So this summer, as I explored those rooms lined with grey Morse-code machines and piles of faded communist booklets, I walked into my own unknowing — my American blind spot, if you will — with the excited curiosity that comes from learning about the world by living it.

And with the humility that comes from unlearning just to learn anew.

Diana Montaño is a multimedia journalist and youth media educator with a serious case of wanderlust. She has worked as a newspaper reporter and editor in Cambodia, a public radio producer in New York and California, and a video production instructor in the highlands of Chiapas, Mexico. Diana is a graduate of the University of California Berkeley Graduate School of Journalism and is based in Paris, France.