Ping-pong players paved the way for a thaw in relations between China and the U.S. in the early 1970s. I witnessed this pivotal moment in history. 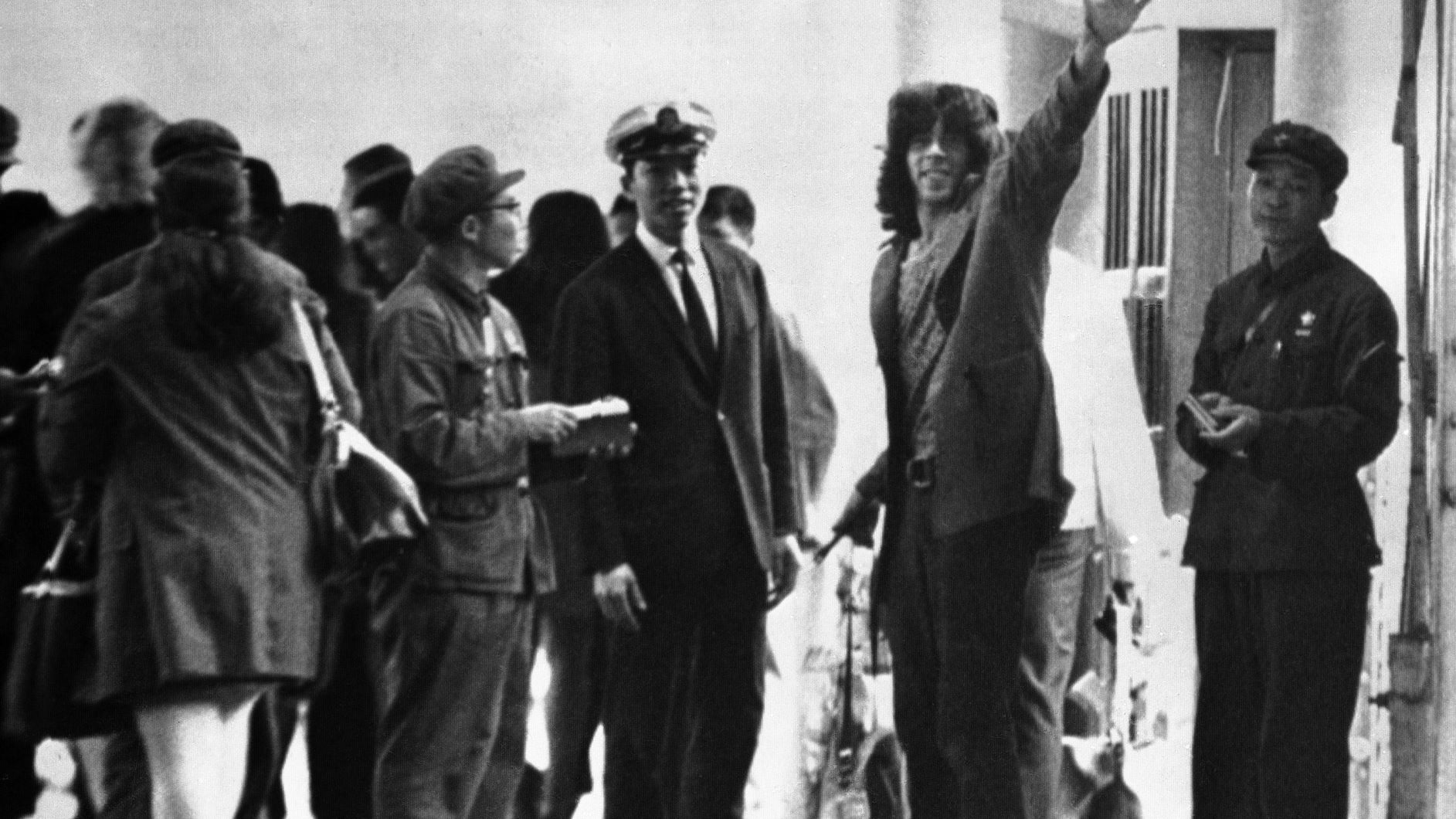 Flanked by Chinese border officials, Glen Cowan, a member of the U.S. ping-pong team, waves to newsmen at Lowu, China, after crossing into China from Hong Kong, 10 April 1971. (AP Photo)

Today’s intensifying rivalry between the United States and China had an improbable genesis 50 years ago when nine young Americans arrived in Beijing with a far from globe-shaking role — to play table tennis.

The fact that the American visitors were not especially good at their chosen sport, being totally outmatched by their Chinese opponents, was irrelevant. Their mere presence in the People’s Republic of China in April 1971 was a sensation.

This was not least for the players themselves, who were thrust unexpectedly and at short notice into an intense media spotlight.

“China’s Ping-Pong Diplomacy was one of the critical developments of the late 20th Century,” said Professor Yu Guoqi of the University of Hong Kong’s History Department.

China, U.S. were ready to turn the page.

It unfroze relations between the world’s most powerful nation and its most populous, ties that had been in deep freeze since the Communists came to power in China in 1949.

The enmity was profound. In the 1950-53 Korean War, American and Chinese soldiers fought each other. At a big-power conference in Geneva in1954, U.S. Secretary of State John Foster Dulles snubbed Chinese Premier Zhou Enlai by refusing to shake his hand. Dulles said he and Zhou would meet only in a car crash.

But by 1971, the global landscape had changed.

The Americans were mired in the Vietnam War, the deadliest conflict in the East-West Cold War. U.S. forces fought for South Vietnam against Chinese and Soviet Union-backed North Vietnam. U.S. President Richard Nixon, although an arch anti-Communist, felt that mending fences with Beijing could help him extract his troops from Vietnam, because of China’s influence with North Vietnam.

For its part, China was beginning to emerge from the grimmest days of the so-called Cultural Revolution, one of the deadly political storms unleashed by Chinese leader Mao Zedong. The economy was in ruins, and the horrors of a famine starting in the late 1950s that killed tens of millions were a recent memory.

A modern China was a distant dream.

The glittering modernity that China proudly displays today — the product of the nation’s astonishing economic success — was a distant dream back then.

In 1971, China also faced an increasingly hostile Soviet Union, its former ally, with clashes along their joint border. Beijing needed better relations with the United States as a counterweight and deterrent to the threatening Soviets.

So both China and the United States had motives to unlock their relations. The curtain rose on their diplomatic breakthrough in the Japanese city of Nagoya, host to the World Table Tennis Championships in March 1971. An encounter between American team player Glenn Cowan and China’s table tennis star Zhuang Zedong was followed by an invitation, approved by Mao, for the Americans to visit China.

The offer was accepted.

But how to get to China?

So acute was China’s self-imposed isolation that there were no flights from Japan to China, or indeed from virtually anywhere in the world. So the Americans flew to one of the few entry points, Hong Kong, then a British colony, where they walked across a diminutive railway bridge that marked the city’s border with China.  From there they took the train to nearby Guangzhou and flew to Beijing.

Ping-Pong Diplomacy was also a turning point for my employer, Reuters, and for me personally.

At that time, the news agency had no reporters in Beijing. Its last China correspondent, Anthony Grey, endured 26 months of claustrophobic confinement in one room of his house between 1967 and 1969. In one terrifying episode, young Maoist fanatics called Red Guards hanged his pet cat Ming Ming in front of him and yelled “Hang Grey!”

Thankfully, they did not do so.

However, for the unfolding table tennis drama, Reuters was offered a visa for a reporter to cover it. It was my great good luck to be chosen.

So it was that on the afternoon of April 14, 1971, I witnessed Premier Zhou telling the Americans that they had “opened a new page in the relations of the Chinese and American people.”

The language sounded vague, but it turned out to be a transformative moment. The Dulles snub of 17 years before was not mentioned.

Zhou also took a question from one of the more flamboyant American team members, shaggy-haired Glenn Cowan. The 18-year-old looked the quintessential hippie, in a garb that during the trip featured a floppy yellow hat, a tee shirt emblazoned with the Beatles song title “Let It Be,” and purple bell-bottom trousers. He cut a truly incongruous figure in the almost universal drabness of 1971 China.

Full diplomatic relations between China and the U.S. followed in 1979, just as China was opening up to the world and gearing up to become the economic, and geopolitically assertive, powerhouse that it is today.

These days Beijing is known, to its critics at least, for its aggressive foreign policy tactics. Friendly “Ping-Pong Diplomacy” is long forgotten. Instead China stands accused of belligerent “Wolf Warrior Diplomacy,” so-named from the Chinese action movie “Wolf Warrior 2.”