How I helped the Stones get rolling

It was 1963 in London. No one knew it, but we were witnessing the makings of a musical legend. And I wrote the first review of the Rolling Stones. 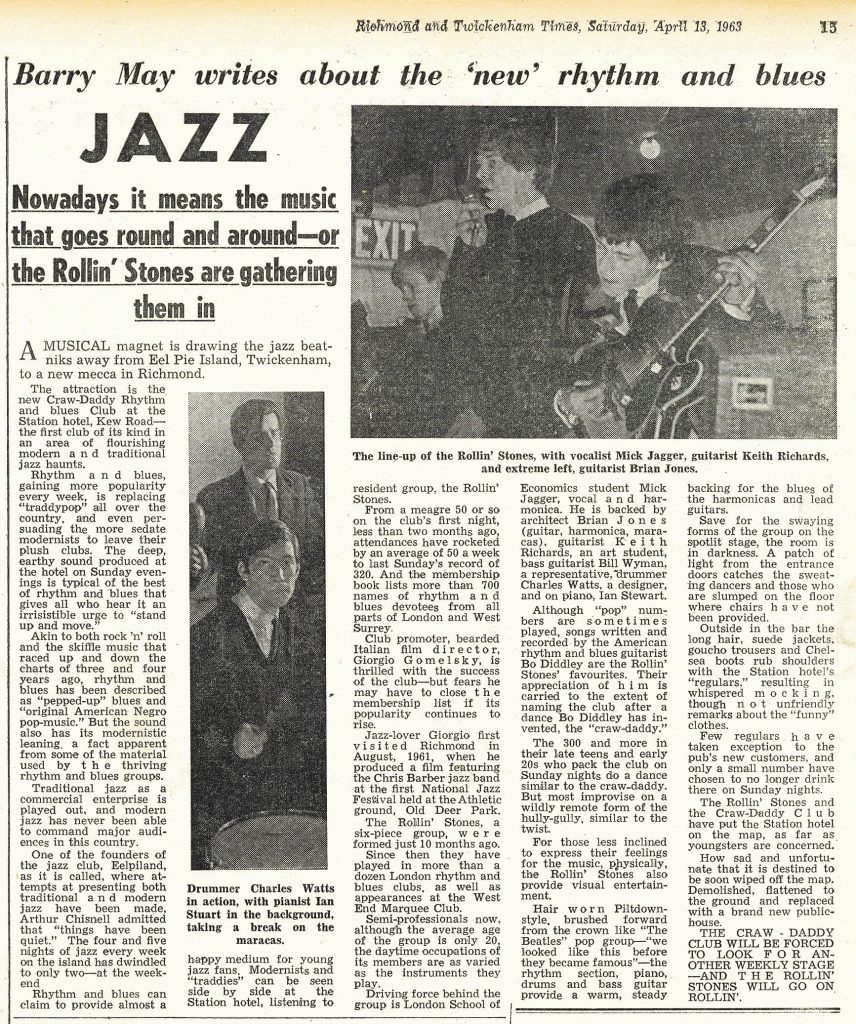 The first review of the Rolling Stones, by News-Decoder correspondent Barry May, published on April 13, 1963

This article is part of a series by our correspondents and guest writers reflecting on the 1960s — a decade of political and social convulsions around the globe — and on the Vietnam War, a Cold War battleground that left an indelible mark on U.S. politics and an entire generation of Americans who came of age in that era. Our hope is that today’s younger generations can learn from their elders’ experiences.

The darkened back room of a century-old pub in a genteel, leafy suburb of London was sweaty, smoky and crowded with teenagers and twenty-somethings on a cool Sunday evening.

Then it began: more than 300 people jammed into the room, lit only by a spotlight shining on the band, started moving in time with an up-tempo rhythm and blues beat, nodding, shaking and bumping into one another as they danced the Hully-Gully, a bit like the Twist.

The whole place vibrated. Drinks were spilt, the floor became sticky. Aromatic smokes were passed around.

It was April 7, 1963, and I was at a music club called the Craw-Daddy in the Station Hotel, just across the street from Richmond Station in south-west London. It was named for a dance that American bluesman Bo Diddley performed.

I was a teenage reporter on the local weekly newspaper, and I had gone there with a photographer to witness the beginnings of a phenomenon – an R ’n’ B band that became a rock ’n’ roll legend that would still be going six decades later.

Only I didn’t know that at the time. But then, neither did they. They were just another group of young students, drifters and chancers trying to break into a pop music scene dominated by The Beatles.

Success would bring the enticing prospect of fame, fortune and legions of hysterical girls falling over each other to get near their idols.

A demi-monde of sex, drugs and rock ‘n’ roll

The band called themselves the Rollin’ Stones, after a Muddy Waters song, Rollin’ Stone Blues. It was a favorite of their leader, Brian Jones, a blond-haired musician aged 21 who played guitar, harmonica and a few other instruments.

The Beatles had got the jump on the Stones and were the established, hugely successful band of the day. The Stones were the anti-Beatles – edgier, studiedly irreverent and a world away from the clean-cut mop-tops from Liverpool in their neat, tailored suits. The Stones personified a demi-monde of sex and drugs and rock ‘n’ roll.

The look was long hair, suede jackets, flares – I called them gaucho trousers – and Chelsea boots. That was the sort of style that many young men dressed in to look cool.

It was Jones who put the band together and got them gigs for a few quid a time – not Mick Jagger, singer, nor Keith Richards, guitarist, friends from the other side of London.

Jagger had the girls shrieking and swooning and the boys aping his on-stage antics, his lippy pout, his lascivious, sexually ambiguous attitude. It was the beginning of the end of an uptight age of deference and the start of irreverence and anything-goes sexual liberation.

The Stones were a six-piece band. The others were Bill Wyman, bass guitar, Charlie Watts, drums, and Ian Stewart, keyboards, maracas and anything else at hand.

Jones told me he was an architect, Jagger and Richards said they were students, Watts a designer. They were semi-professional because nobody paid them much. The Sunday night residency at the Craw-Daddy was the best regular booking they could get.

“A musical magnet is drawing the jazz beatniks to Richmond.”

Their manager was Giorgio Gomelsky, a bearded Italian impresario and film maker with an exotic, central European background who had started the club. He didn’t last long.

He was squeezed out as manager the following month by Andrew Loog Oldham, a young pop Svengali who removed Stewart, a straight-looking Scot, from the onstage line-up because he didn’t fit the Stones’ professional persona of rebellious youth. Stewart became their roadie with a part on piano for their recordings that would continue for years. He died in 1985.

As the son of a pianist brought up on jazz, I had been writing occasional reviews of musical groups in the local area – rhythm and blues, rock and jazz, both traditional and modern.

My piece on the Stones began: “A musical magnet is drawing the jazz beatniks … to a new mecca in Richmond.” I’m not sure that’s what I wrote exactly, but that’s how it appeared in the Richmond and Twickenham Times the following Saturday, April 13, 1963, after the paper’s middle-aged sub-editor had taken his blue pencil to my youthful prose.

The article took up most of a page of the somewhat staid local rag. The paper was owned by Richard Dimbleby, a famous BBC journalist, and it was a pillar of the local community.

The following day, April 14, The Beatles went to the Craw-Daddy to hear the band, and a month later, on May 9, the Stones signed with Decca Records. Their first disk was Chuck Berry’s “Come On,” a favorite at their Sunday night gigs. It was released on June 7.

After a while, they dropped the apostrophe and styled themselves the Rolling Stones.

Jones kept my article in his wallet as a talisman.

My review was the first article about them to be published anywhere. Jones was so pleased with it that he carried a cutting in his wallet as a talisman. It helped to bring them to the attention of the movers and shakers of the pop music scene in Britain and set them on the road to riches.

But it didn’t bring Jones good luck. The Stones’ founder was fated to be denied their success over more than half a century.

Jagger and Richards became more prominent, wrote songs, and took the band in the direction of hard rock and away from rhythm and blues. Jones fell out with their manager and descended deeper into drugs. In June 1969 , they asked him to leave the band he had formed seven years earlier, and within a month he was dead – drowned in the swimming pool of his home in the country while high on illegal drugs at the age of 27.

He thus became a member of the “27 Club” – musicians, artists and actors who died at that age. Jimi Hendrix and Jim Morrison of The Doors would follow a couple of years later. Janis Joplin was another and, much later, Kurt Cobain of Nirvana.

On the strength of my review, I was lured away from my local newspaper to a writing job at the heart of the pop music scene, a glamorous world of fun, parties and girls that lasted about a year before I navigated my way back to more orthodox journalism and eventually landed up as a foreign correspondent for Reuters.

The Stones kept on rolling through a life of hit records, world tours and broken marriages. And my musical tastes returned to the genre I had learned to appreciate through my father – jazz.

Barry May advises organisations on corporate communications. Previously he was a correspondent and bureau chief for Reuters in London, Johannesburg, Karachi, Rawalpindi, Beirut, New York, Washington, Tehran and Dubai. He is an award-winning corporate communications specialist and had responsibility for Reuters’ publications worldwide including magazines and video. He is the founder, editor and publisher of The Baron, a website for Reuters people, past and present.