In Hong Kong, a sense of powerlessness is taking hold

It’s been four years since young activists in Hong Kong launched a movement for democratic reforms. Now, a sense of powerlessness is growing. 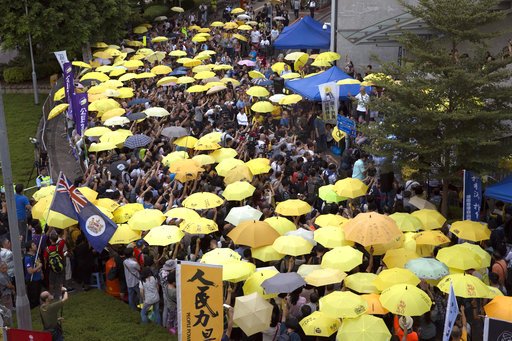 Few birthday candles were blown out this year as Hong Kong marked the 21st anniversary of the end of its time as a British colony and its return to China’s rule.

Across this city of seven million people, there was less of a traditional “coming of age” feel about the occasion in early July, more an atmosphere akin to a mid-life identity crisis.

Frustration and discontent about how Hong Kong is currently governed are rife, no more so than among the city’s young people. That’s because in recent years they have been at the forefront of a push to obtain a full set of democratic institutions, something which Hong Kong has never had.

And their efforts appear to be stymied.

A high point in the reform campaign came in 2014 when thousands of mostly youthful, peaceful activists camped out on main roads, disrupting traffic in three areas of Hong Kong for 79 days. (Despite claims by some mainstream media, the campaign did not bring Hong Kong “to a standstill” or “grinding to a halt.” That was fake news.)

The occupation was known as the “Umbrella Movement” — the demonstrators used umbrellas to fend off police batons and volleys of anti-riot sprays.

Beijing objects to the idea of democratic reform.

One of the movement’s leaders was Joshua Wong, who with his black-rimmed spectacles and young-kid haircut seems an unlikely poster boy for a mold-breaking reform drive. But his persistent advocacy and calm resolve in this and other campaigns got himself on the cover of Time magazine in 2014 plus a nomination for a Nobel Peace Prize.

However, his movement folded its umbrellas with none of its aims — free elections for the city’s entire legislature and for the top official, the chief executive — achieved.

And since then, resistance to reform has stiffened, both from Beijing and its supporters in the pro-establishment camp in Hong Kong.

Beijing objects stridently to the idea of democratic reform, seeing it akin to a virus that could infect mainland China and threaten the Communists’ one-party rule.

For its part, the conservative Hong Kong camp is reluctant to provoke Beijing and upset the deal under which the city can keep its capitalist ways and independent legal system for 50 years, starting from 1997.

Under this template, called “One Country, Two Systems,” Hong Kong can do things that are strictly forbidden across the adjacent mainland China border.

For example, every June 4, tens of thousands of Hong Kongers, young and old, stream unchallenged into a city park for a candlelight vigil. It remembers victims of the pro-democracy movement crushed in Beijing’s Tiananmen Square in June 1989.

China’s rulers, as well as banning such commemorative activities on the mainland, would prefer the anniversary were airbrushed from everyone’s calendar.

The outlook for reformists is bleak.

This year, organizers said more than 100,000 people turned up for the Hong Kong vigil. Police, who typically give a far lower figure, say the number was 17,000.

A feature of the gathering was that leaders of several local student unions stayed away. While sympathetic to the vigil’s cause, they said Hong Kong people should pay closer attention to Hong Kong’s problems rather than those involving Beijing.

However, such attitudes smack of a separate identity or even some form of independence for Hong Kong, and hence are totally anathema to Beijing.

Along with Joshua, other activists including elected members of the city’s legislature who were ousted on technicalities have served jail time for their pains or been otherwise sidelined.

So the outlook for Hong Kong’s youthful reformists is bleak. The rules are stacked against them, and they see Beijing as increasingly bending Hong Kong to its autocratic will.

As the South China Morning Post newspaper put it, “the city is facing growing cynicism, powerlessness and resignation.”