Helping refugees when millions more are on the move

Russia’s invasion of Ukraine has pushed the global total of refugees to over 100 million. Refugees are like you and me — but not always welcome. 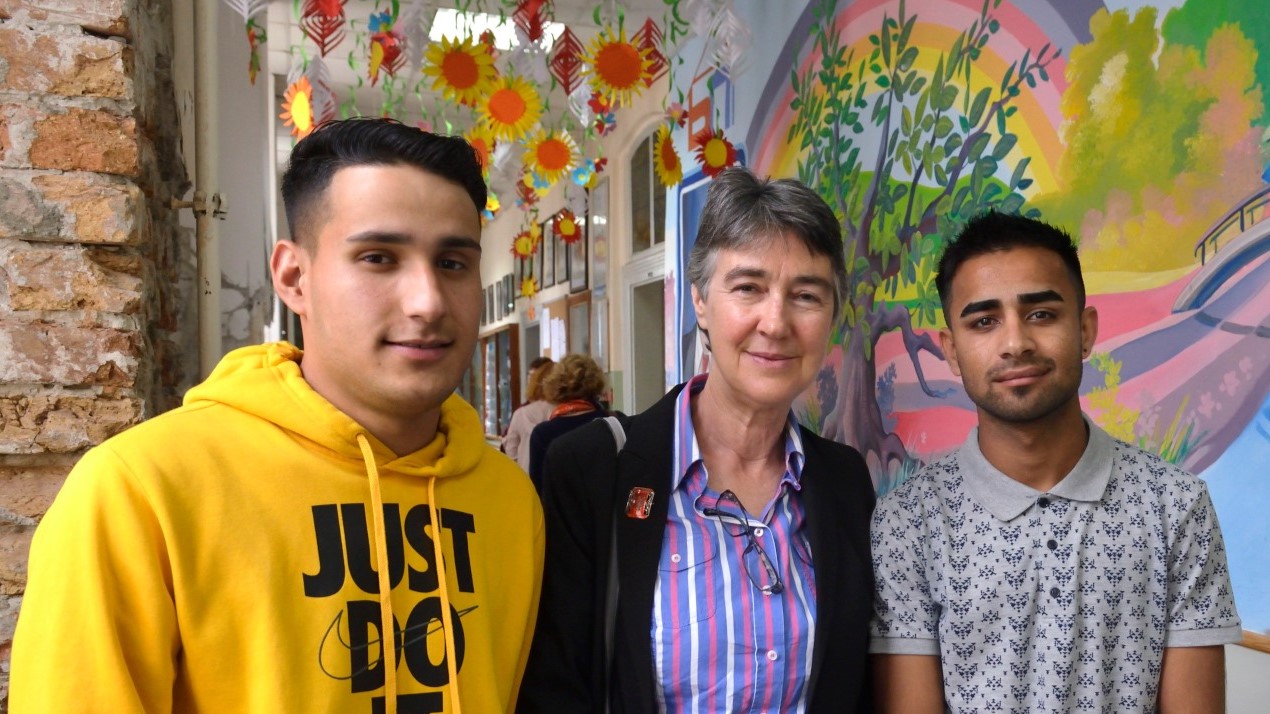 The author (center) with two Afghan refugees at Branko Pešić school in Belgrade, Serbia, in 2019. (Photo courtesy of Helen Womack)

“Anyone can become a refugee; refugees are just like you and me.”

The United Nations High Commissioner for Refugees (UNHCR) regularly stresses this message to the public. In six years of writing about refugees, I have come to understand what they go through, how they cope.

This year, Russia’s invasion of Ukraine has pushed the global total of forcibly displaced people to a record figure of over 100 million. The exodus of Ukrainian refugees differs from the refugee crisis of 2015, when 1.3 million people from Syria, Iraq, Afghanistan and other countries came over sea and land to reach Europe.

In 2015, many of the asylum seekers were men — either young, single men or married men who did not want to risk the lives of their wives and children on the treacherous sea crossings. They hoped to gain a foothold in Europe so their loved ones could eventually join them.

The refugees coming from Ukraine are overwhelmingly women and children — 90% in fact. They have come alone because their husbands and fathers must stay behind and fight. According to the UN, as of June 22, 7.7 million Ukrainians had fled abroad; as of late May, more than seven million had been internally displaced.

If the profiles of the refugees from 2015 and 2022 differ, so too does the reception they have received. Hungary and Poland built fences to keep out migrants from the Middle East; but these former Communist countries have welcomed refugees from Ukraine with open arms.

It is to some extent understandable that countries welcome refugees from neighbouring states, with similar histories, culture and religion. They think these people are more likely to integrate. But in its annual message for 2022, UNHCR said: “Every person has the right to seek safety — whoever they are, wherever they come from, whenever they are forced to flee.”

Refugees can be remarkable in their resolve and achievements.

Refugees come from war zones or other situations of extreme danger. They are not on the move from mere whim. Some have been refugees twice over — Palestinians who grew up in Syria before war there forced them to flee again, or Sudanese who fled to Libya only to discover that wasn’t a safe place either.

During the active phase of flight, when they have to pack up their lives in one or two small suitcases, refugees tend to hold themselves together well. Evidence of trauma, such as survivor’s guilt or depression, may come later when they have time to reflect in a safe place.

The refugees I’ve met have been remarkable in their resolve and achievements. One young Afghan — let’s call him M — had only elementary education when he fled the Taliban at age 13. His brother drowned on the sea crossing between Turkey and Greece, and he was left to walk through the Balkans alone. Luckily, he was adopted by an Austrian couple who were both scientists, and now he is doing post-graduate research in medicine in Vienna.

As M said, refugees may see in their young lives what others never see in a lifetime. This experience makes them wise beyond their years and determined to succeed for the sake of those they have lost or left behind.

Refugees come in waves — not waves that threaten to flood us but waves depending on the phase of the war or emergency. In any troubled country, the wealthy leave first, since they often have options abroad. As the situation worsens, more come out, with the poorer leaving later. The elderly and other vulnerable people risk getting stuck.

In Europe, we saw how refugees from Ukraine first came in cars, then by train. At the Ukraine-Slovakia border, I met two oldish sisters from Sievierodonetsk, who had just spent their first pensions on rucksacks. They had nothing to go back to and no idea where they were going. By nightfall they had places in a refugee hostel and were planning to try and find work.

Refugees from Ukraine hope their sojourn will be short.

In response to the Ukraine crisis, the European Union has issued a Temporary Protection Directive, allowing these refugees to stay in member countries, get accommodation and financial support and look for work. Refugees from other countries have had a longer struggle to be accepted.

Refugees — certainly the Ukrainians — initially hope their sojourn will be short and they will soon be going home. But for many, it starts to sink in that their exile is long-term. How quickly they get their lives back on track and integrate into the new society depends on the compassion and efficiency of the host country.

Refugees who are allowed to bring their immediate relatives to join them through family reunification programmes do better than those who are separated from loved ones. And those who manage to learn the language of the new country have a better chance on the labour market. In 2015, Austria and Germany showed the way by providing free language classes for refugees.

In Budapest now, Ukrainian refugees who happen to be teachers have launched pop-up schools, where their kids can pick up the threads of their disrupted education. If they stay, the Ukrainian children will eventually have to go to Hungarian schools, but the Ukrainians may continue to run their classes on Saturdays as a way of keeping their culture alive.

Culture and history are intertwined, and history teaches us that there have always been nomads and settled people.

Some of us are on the move for good reason while others have equally good reasons to stay at home. Interests can clash. In 2022, when one in every 78 people on the planet is a refugee, it is more important than ever that the uprooted and the anchored find mutual understanding.