Transgender and queer immigrants can face hardship in detention and when settling in the U.S. Here’s a group that helps LGBTQIA+ migrants. 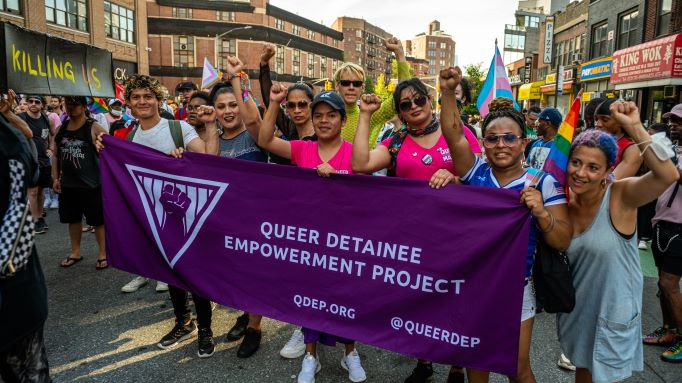 Protesters at a rally jointly organized by the Queer Detainee Empowerment Project in New York on 4 July 2021. (Photo courtesy of QDEP)

Those are some of the ways that the Queer Detainee Empowerment Project (QDEP), based in New York, helps immigrants who are transgender or queer while they are in detention or as they seek to integrate into U.S. society.

The U.S. government commonly incarcerates immigrants while authorities determine whether to deport them or allow them to remain in the country. The country has the largest immigrant detention infrastructure in the world.

Detention can be difficult for anyone, but immigrants who identify as lesbian, gay, bisexual, transgender, queer, intersex or asexual (LGBTQIA+) are especially vulnerable. The same holds true for detainees with HIV or without immigration documents.

“LGBTQIA+ migrant rights are invisible to the public,” said Ian Zdanowicz, Co-Director and Coordinator of Direct Services at QDEP.

“They often immigrate from their home country without family or support due to their identity not being accepted. When they are incarcerated in detention centers, there is an abundance of transphobia and homophobia,” Zdanowicz said.

According to a 2016 report by Human Rights Watch, some transgender women in U.S. detention facilities are denied access to medical care, including hormone replacement theory and HIV-related treatment.

Once released, an immigrant can face a daunting series of challenges before settling into society.

Founded in 2014, QDEP helps LGBTQIA+ detainees and undocumented individuals receive health, educational, legal and emotional assistance while addressing what it calls “state violence” against members of that community.

“Currently immigrants and refugees need the most help with reintegration into society and meeting basic needs,” said Zdanowicz, who said the U.S. government has “criminalized immigration.”

Supporters take immigrants to doctor’s appointments, drive them to visits at detention centers and write letters of support to those in extended detention. QDEP has provided commissary funds and books to detainees at correctional facilities.

Paul White is an LGBTQIA+ immigrant held at a detention center in the state of Virginia since August of 2020. At one point, he spent more than three months in solitary confinement.

At a session hosted by the People’s Forum in Manhattan and supported by QDEP, participants wrote letters of support to White and spoke to him over the phone. QDEP has directed White towards legal assistance because, according to QDEP, he has faced retaliation from guards for speaking out against abuse.

Currently QDEP is focused on delivering groceries and medicine to members who require assistance. “QDEP wants to ensure members are not stressed about daily necessities on top of health issues because most members are immune-compromised,” Zdanowicz said.

A grassroots organization, QDEP strives to increase the public’s understanding of why the LGBTQIA+ community faces disadvantages. It tries to avoid a paternalistic approach often adopted by charities, whose donors and volunteers can see themselves as momentary saviors, by ensuring individuals in the LGBTQIA+ community are involved in strategy and activities.

As I looked more closely at QDEP’s work, my own perception of service started to change. I asked myself, “How can we engage in community service without the typical power dynamics?”

Perhaps in that subtle way, QDEP has helped spread a message of understanding beyond those in immigration detention. 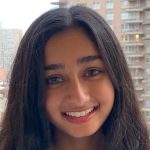 Hanna Rahman is in her last year of high school at the Hewitt School in New York City. Rahman is a News Decoder Student Ambassador, leads her school’s debate club and serves as one of the senior editors of her school’s newspaper. She is interested in international relations and law. Rahman’s goal as Student Ambassador is to encourage students to write for News Decoder and to educate her community about underrepresented global events.