Guns in America: Students are shifting the debate

Students are leading the charge for stricter gun controls in the U.S. But they face entrenched opponents and a deep cultural attachment to firearms. 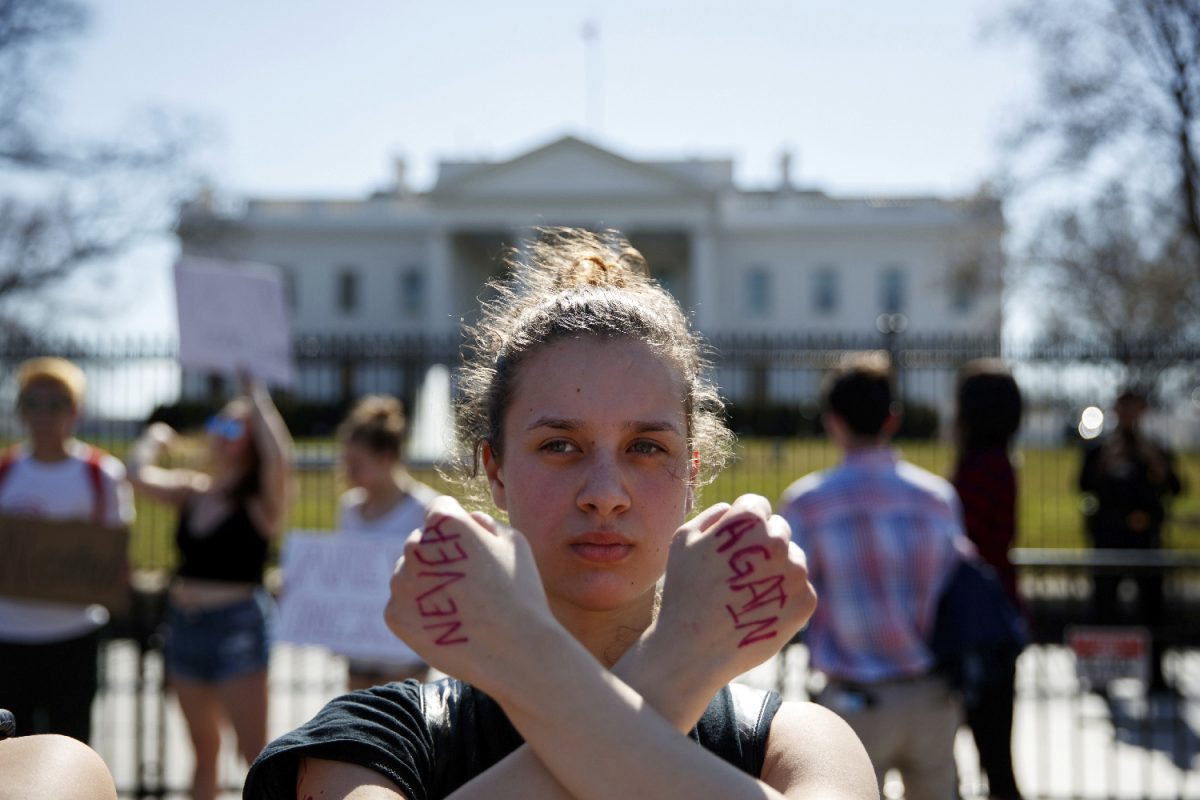 A young woman stands in front of the White House during a student protest for gun control, Washington, 21 February 2018. (AP Photo/Evan Vucci)

Something has shifted in the United States since 17 people were shot and killed on Valentine’s Day at a Florida high school.

The National Rifle Association (NRA) is on the defensive, its lock-tight grip on Republican politicians shaken by an outpouring of anger and eloquent pleas for gun control from students at Marjory Stoneman Douglas High School who survived one of the world’s deadliest school massacres.

The NRA’s out-sized influence over U.S. lawmakers and its refusal to give an inch on gun control have long been viewed with bemused incomprehension by the outside world.

Now it is being questioned with a passion and effectiveness that may surpass the aftermath of the horrific 2012 Sandy Hook school shooting, when 20 kids aged just six to seven were murdered in their classrooms.

Pressured by the fast-growing #BoycottNRA Twitter campaign, more than a dozen major companies have cut off the NRA from programs that gave members discounts and other perks.

Florida’s legislature, against the wishes of the NRA, appears to be coalescing around an unprecedented set of measures that would set higher age limits and longer waiting periods for those who want to buy assault rifles.

Gunman Nikolas Cruz’s rampage resulted in only the third-highest death toll among U.S. mass shootings in the past year.

A difference this time has been the students’ compelling voice.

So why has the reaction been different this time? And will it result in meaningfully tougher gun control laws — among the most polarizing of issues in an ever more polarized America?

A crucial difference this time has been the compelling voice found by the high school students themselves to question the NRA’s standard talking points after mass shootings.

Just three months ago, the school’s debate team was brainstorming arguments on gun control and constitutional rights, priming them for their impressive appearances on national TV and to hold their own with lawmakers.

They have found a willing ear among many Americans at a time when opposition to President Donald Trump’s agenda is growing, manifesting itself in a surge in political engagement that is stoking Democrats’ hopes ahead of mid-term elections in November.

For corporate America, breaking with the NRA has become less risky. Companies are more willing than before to take a side in U.S. culture-war issues such as LGBT rights, and some polls show public support for stricter gun controls rising.

But don’t count out the NRA.

The group has already had success in discrediting the student-led movement and steering the post-shooting discussion toward school security and mental illness.

Trump expressed sympathy for the students’ demands for more gun-control measures after meeting them and their families at the White House. But the recent record shows that it is conservatives who really have his ear. He has quickly pivoted to push the NRA-favored notion of arming teachers.

The only bills on gun control being considered by Congress are incremental — banning the “bump stock” modification used by the gunman in last year’s Las Vegas massacre of 58 people and bolstering criminal background checks.

Since Sandy Hook, more than a hundred gun-control bills have been been introduced on Capitol Hill, only to die or languish. It is a measure of the NRA’s success that a return to the 1994-2004 federal ban on assault weapons is, currently, unthinkable. Only seven states ban such rifles, the mass shooter’s weapon of choice.

To understand the enduring power of the NRA, one needs to look beyond the well-worn accusation that it holds politicians hostage with its campaign donations. Its campaign financing is significant, to be sure, but is not enough to so consistently make politicians do its bidding in spite of other interest groups and voter demands.

The NRA’s hold on legislatures stems from its canny ability to tap into the deep cultural attachment to gun rights among many Americans that U.S. progressives and foreigners find hard to comprehend.

To have any hope of achieving significant gun-control reform, the emerging coalition of students and activists needs to dig in for the long haul. They need to find ways to match the NRA’s ability to rally its base and offer an alternative cultural bond that taps into values that Americans hold dear.