The U.S. has a history of high rates of killings by firearms. But Congress has passed only three laws controlling guns. The prospects for more are dim. 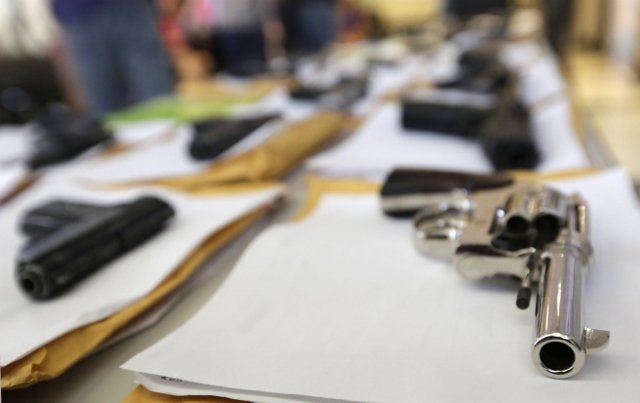 This is the first in a series of four articles by students at Indiana University on guns in America.

The United States has a storied and contentious history with gun legislation.

The popular narrative of a frontier country, born out of war and relentlessly pushing into the lawless West, is a compelling if overly-generalized version of the nation’s history, firmly rooted in the national identities of many Americans.

So too is a deep-seated distrust of government, which dates back to the country’s break from Great Britain more than two centuries ago.

The distrust is codified in many parts of the U.S. Constitution, from the checks and balances that derive from the separation of powers, to the role of states, to the fact that the president is not empowered to write laws.

One of the most firmly-held and hotly contested rights is guaranteed by the Second Amendment to the Constitution — the right to bear arms.

U.S. history and citizens’ views towards government have helped shape Americans’ steadfast affinity for firearms, even in the face of widespread gun-related violence.

At the federal level, the country has passed three bills regulating gun ownership: the National Firearms Act (NFA) of 1934, the Gun Control Act of 1968 and the Brady Handgun Violence Prevention Act of 1993.

The NFA, adopted shortly after the end of Prohibition, was the nation’s first attempt at federal regulation of firearms ownership.

The law was primarily a response to rampant crime by Prohibition-era mobsters who gained influence and power running bootleg alcohol operations around the country.

Support for the law gained momentum after the attempted assassination of President Franklin Roosevelt a few weeks before his first inauguration in 1933.

The 1968 Gun Control Act stemmed from another turbulent period.

In the 1960s, three national leaders were gunned down: President John Kennedy in November 1963, Martin Luther King in April 1968 and Senator Robert Kennedy in June of the same year.

Passing firearms legislation is a daunting task for Congress.

To assassinate President Kennedy, Lee Harvey Oswald used a gun purchased via mail-order through the National Rifle Association’s magazine, American Rifleman. Kennedy’s death sparked spirited debate in Congress over a bill to ban the sale of mail-order firearms and to tighten regulation of interstate firearms transactions.

But it wasn’t until the tail end of the decade, after King and Robert Kennedy were also assassinated by gunfire, that the Gun Control Act was signed into law in October of 1968.

In March 1981, another high-profile assassination attempt, this one unsuccessful, led eventually to the passage of the third piece of federal firearms regulation legislation: the Brady Handgun Violence Prevention Act, or the Brady Bill.

The law is named after James Brady, President Ronald Reagan’s press secretary, who was shot during an assassination attempt on the president’s life. Brady received a serious head wound that left him partially paralyzed for life.

The Brady Bill was designed primarily to strengthen the Gun Control Act of 1968 by closing some loopholes in the earlier legislation.

To be sure, gun reform legislation has long had an uphill battle in Congress. The Gun Control Act took five years to clear Congress. The Brady Bill took more than a decade. And it took the assassination of one president and an attempt on the life of another to rally enough support for these two landmark laws.

The statistics on gun use are chilling.

Yet many experts and legislators argue that existing federal laws are inadequate.

The relatively high number of mass shootings in the United States has prompted the introduction of several new proposed gun reforms aimed mainly at limiting the firepower available to the public. But they have little chance of passage in a Congress controlled by the Republican Party, which generally opposes new control measures.

The statistics on gun use are chilling. Of all public mass shootings in developed nations, 31 percent occur in the United States.

In the past decade, three mass shootings — Virginia Tech in 2007, Sandy Hook Elementary School in 2013 and Pulse Nightclub in 2016 — killed 108 people, including 20 children aged seven or under.

Yet mass shootings that generate big headlines do not tell the entire story.

Last year there were 385 mass shooting incidents, up from 333 in 2015, according to the Gun Violence Archive. A mass shooting is defined as a single incident in which four or more people are shot and/or killed.

Nor do mass shootings tell the entire story. There were 58,085 firearms incidents last year, in which 15,027 people were killed and 30,584 injured, according to the Gun Violence Archive.

The United States regularly reports the highest rate of gun-related homicides among high-income countries in the world. In 2010, there were 3.6 firearm homicides for every 100,000 people in the United States — a rate that was 25 times higher than the average rate for other high-income countries, according to an article published last year in The American Journal of Medicine.

“Overall, our results show that the United States, which has the most firearms per capita in the world, suffers disproportionately from firearms compared with other high-income countries,” the article said. “These results are consistent with the hypothesis that our firearms are killing us rather than protecting us.”

So with repeated mass shootings and by far the highest rate of gun-related homicides in the developed world, why is it so hard for gun control legislation to move through Congress?

In this series, the News-Decoder team at Indiana University looks at the special role that guns play in U.S. society.

Read our series on “Guns in America” here.

Rae McFadden is a second-year student at Indiana University in the United States, studying law and public policy. She believes that knowledge and information are the keys to freedom, empowerment and change. She is one of News-Decoder’s student ambassadors.