Grexit: What Greece can learn from Asia’s crises

Greece is a long way from Indonesia of 1997, but the European nation could learn from Asia’s own crisis. 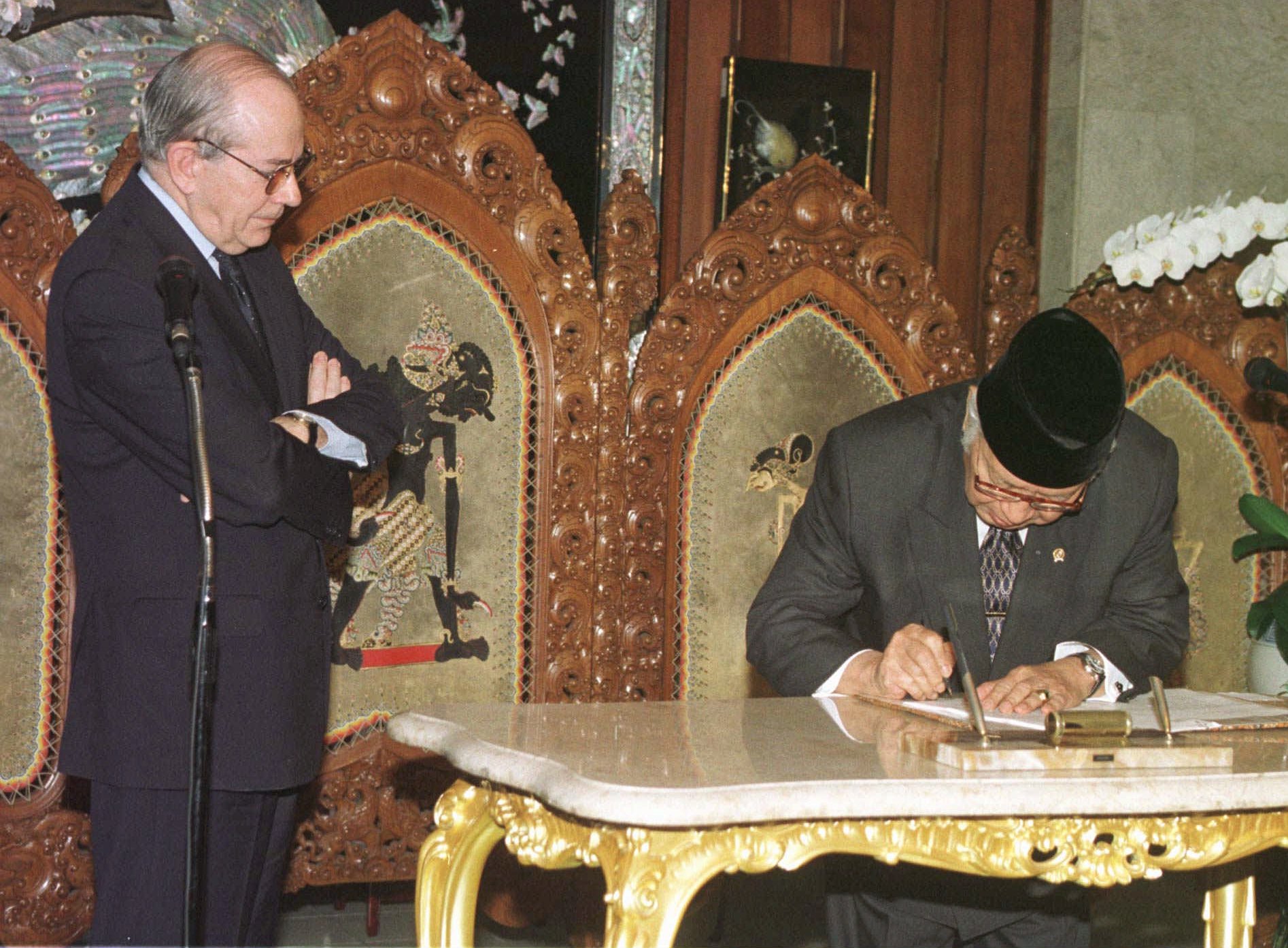 There’s a famous photo from the Asian crisis of the late 1990s of then IMF managing director Michel Camdessus, arms folded, standing over Indonesia’s President Suharto.

More than anything it illustrated what can happen to a proud independent nation when it fails to meet promised reforms.

The humiliation captured in that photo stunned a nation and help put paid to the dictator’s 30-year long reign.

It’s open to debate whether there will come a point where Greek Prime Minister Alexis Tsipras is forced to sign a new deal with creditors under the steely gaze of current IMF chief Christine Lagarde.

But if Greece exits the eurozone and starts relying on a domestic currency again, it’s likely only the IMF who can help them after Grexit.

And while the international body may have softened its stance in recent years, many Asian nations would confirm it’s an experience not to be forgotten.

A memory seared in my mind from the height of that crisis, when the government was struggling to keep the economy afloat, was a visit to the central bank.

I found the vast atrium of the building filled with pallets of freshly-printed rupiah bank notes. They had simply run out places to store it all.

If there is a lesson from Asia’s financial crisis for the Greeks, it is that once a nation gets beyond the anger and the frustration of seeing its economy reduced to tatters by capital flight and debt woes, there can be a strong recovery.

Of course it helps if there’s a large, fast growing economy in the region  — China for many Asian countries.

The growth rates of some of the hardest hit Asian nations  — Korea, Thailand, Malaysia and Indonesia  — have been phenomenal over the past two decades. Many of these countries quickly repaid the emergency loans given to them as part of their initial rescue plan.

At the moment Greece is a long way from Indonesia in 1997, when I had to clamber over barbed wire and walk around tanks on the main roads of the capital Jakarta to report on the latest moves by the beleaguered government.

While “Grexit” may not be inevitable, it is certainly looking more likely.

Could this be the ultimate outcome for Greece? As a powerhouse German economy encourages a strong export focus on its weaker European neighbor? And a weak Greek national currency causes a shift in German holiday patterns to favor the delights of Greek islands?

Or could Greece follow the pattern established by South Korea and use a weaker domestic currency to foster a return to traditional industries such as ship building, which the Koreans once dominated?

Then there is the Malaysian route: issue a new currency and peg it at a fixed rate, impose capital controls and ride out the storm. It worked in a way that maintained Malaysian national pride, but cost a lot in terms of missed growth opportunities over time.

While “Grexit” may not be inevitable, it is certainly looking more likely.

Invesco’s chief economist John Greenwood, who was the architect of Hong Kong’s exchange-rate system, estimates that Greek government debt is around €320 billion, or 180% of GDP in 2015.

Although this is held mainly by the European Union, the European Central Bank and the IMF — the “troika”– rather than the private sector, Greenwood says Greece is effectively “insolvent.”

In that sense, it is closer to the state of the Asian nations 18 years ago than many might think  — perhaps not be a bad thing.

(Click here for more News Decoder stories on Europe, from Grexit to Brexit.)

Richard Hubbard is a finance and economics journalist with more than 30 years reporting from Australia, the UK, Asia and the Unites States. He is currently news editor for International Adviser, a web site serving financial advisers in the UK, Middle East, Asia and South Africa, and was formerly Global Markets Correspondent for Reuters. He covered the Asian financial crisis of the late 1990s from Hong Kong and Singapore, and later the run-up to the 2008 financial crisis from London.

Share This
World Asia Grexit: What Greece can learn from Asia’s crises