Emmanuel Macron as French president proves that embracing Europe and globalization need not be a political death wish. But he must deliver. 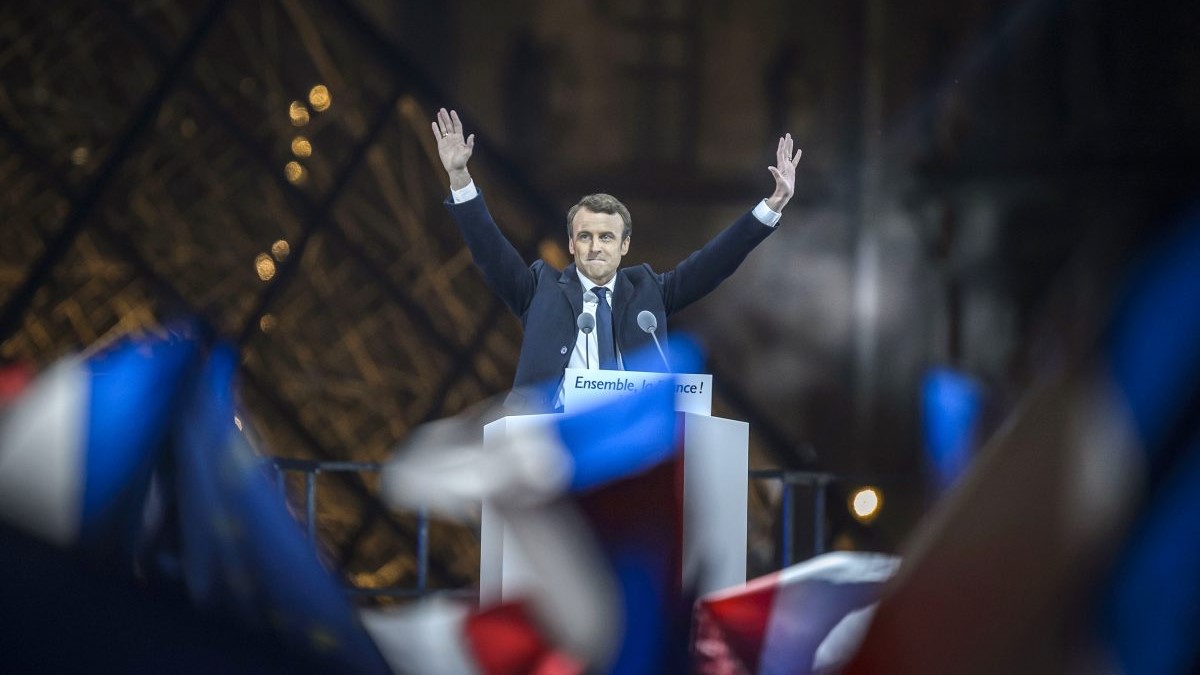 French President-elect Emmanuel Macron celebrates on the stage at his victory rally near the Louvre in Paris, France, 7 May 2017. (EPA/Christophe Petit Tesson)

Centrist Emmanuel Macron’s convincing win in the French presidential election is welcome proof that embracing Europe and globalization need not be a political death wish. A champion of openness has triumphed over a pinched, backward-looking xenophobe.

Now the hard work begins. It would be naïve to suppose that the rising tide of defensive nationalism represented by Brexit and Trump has crested. Indeed, if Macron fails to make good on his message of hope, popular disillusionment can only increase.

The abstention rate in Sunday’s run-off was 25 percent, and more than four million voters, or 11 percent of those who went to the polls, spoiled their ballots or cast a blank ballot, according to the Interior Ministry. National Front leader Marine Le Pen, who won one-third of the votes, could still make it to the Élysée Palace at the next election in 2022.

The difficulties Macron faces are well-documented. He needs to forge a working majority in the National Assembly after next month’s legislative elections, yet his “En Marche!” (Onward!) movement was formed only a year ago.

Working in his favor is the fracturing of the political landscape. Macron can count on the defection of idealist and opportunist lawmakers from the main left-wing and right-wing parties, neither of which was represented in the second round for the first time since the Fifth Republic was established in 1958.

But the new political configuration, as in Trump’s America and post-Brexit Britain, is inherently unpredictable. And so, therefore, are Macron’s chances of pushing through the legislation needed to reinvigorate France’s sluggish economy and restore national confidence.

Macron knows that France, in electing a relative novice, has voted for change but at the same time fiercely opposes change. Past presidents and prime ministers can ruefully attest that even modest reforms can bring France’s still-powerful unions out on strike, often with the broad support of a population whose instinct is to thumb their nose at the establishment. (Editor’s note: The hardline CGT trade union called on members to demonstrate in Paris on May 8 — the day after Macron’s election.)

And then there’s the substance of what Macron wants to achieve. Jobs in heavy industries such as coal and steel are not coming back. The march of the robots might be slowed but will not be stopped. Asia will long be able to produce consumer goods more cheaply than Europe.

Macron recognizes voters’ unease with rapid technological progress and globalization, but rightly wants to protect the worker, not the job. His task is to work out how – something that has largely stumped parties of all stripes across Europe.

Macron has the advantage of starting with an economy that is much more resilient than portrayed by Le Pen. Growth has been slow, but it has been steady. Public services are world-class; so are its leading companies. France needs to lower taxes and social charges to encourage hiring. More competition is needed in key sectors. But the French model needs tweaking, not trashing.

The EU thrives only if the Franco-German axis is working well.

Macron’s task begins at home, but he deserves help from Europe. Germany holds the key. Once September’s federal elections are over, Berlin should give a careful hearing to Macron’s plans to beef up the euro zone by endowing it with a central budget, an economic stabilization mechanism and the power to make joint investments.

For many in Germany, such ideas boil down to bailing out spendthrift governments. But Berlin is also aware that the EU thrives only if the Franco-German axis is working well. It hasn’t been. France has lost economic ground to Germany, and its political influence has ebbed accordingly.

This has put too much unwanted responsibility on Germany’s shoulders. By making compromises – and the finance ministry in Berlin has long favored a European Monetary Fund – Germany would be serving its own interest by belatedly shoring up the architecture of the euro.

Importantly, doing so would strengthen Macron’s authority and help deprive anti-Europeans of a scapegoat for France’s home-grown ills.

Europe is breathing a sigh of relief over Le Pen’s defeat. But the National Front will be back for more if Macron fails to deliver. His victory is no more than the end of the beginning of the fightback against destructive populism and protectionism.