What to make of France’s ban on burkinis?

What are we to make of France and the burkini? Should we be outraged that towns have banned the swimsuit? Or glad as it is a symbol of oppression? 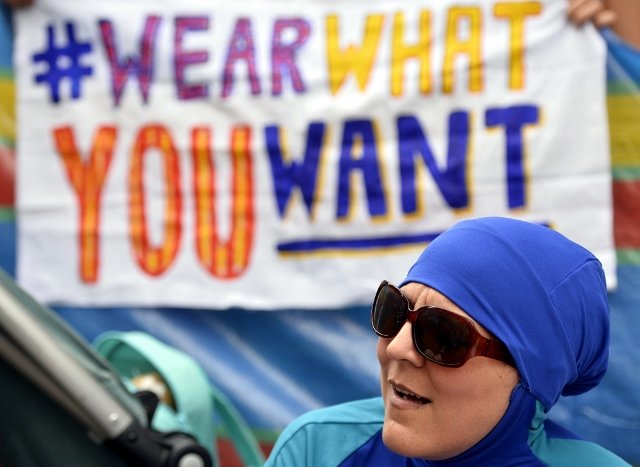 A woman wearing a burkini at a protest in London, 25 August 2016. (EPA/Hannah McKay)

What are we to make of France and the burkini?

Should we be outraged because some towns have banned the full-body swimsuit? Indignant because the measures are an affront to women’s rights and a sign of growing Islamophobia?

Or is the garment a symbol of oppression at odds with France’s secular traditions and a dangerous provocation after a string of deadly terrorist attacks?

The decision by more than a dozen coastal towns to ban the burkini from their beaches has provoked a debate that is sure to rumble through France’s presidential election next spring. The controversy reverberates throughout Europe, which is struggling to integrate large numbers of Muslim refugees amid the rise of far-right, xenophobic parties.

The burkini bans have ignited a social media firestorm, fanned by photos of armed police ordering a Muslim woman on a beach in the Mediterranean city of Nice to partially disrobe.

International sympathy for France after recent Islamist attacks in Nice, Normandy and Paris is now yielding to a mixture of anger, ridicule and condemnation. Meanwhile local politicians, unmoved by outsiders’ scorn, stake out hard-line positions ahead of the 2017 election with an eye to security and immigration.

With elections on the horizon, the controversy will ramble on.

True to News-Decoder’s mission, let’s step back, suspend our righteous outrage for just a minute and try to see how the burkini ban fits into France’s history. Understanding the past may not change our convictions, but it might make it easier to discuss the issue and trace a way forward.

But first, we should not assume that an initial ruling on Friday by France’s highest administrative court invalidating the ban will settle the issue once and for all.

The Conseil d’État suspended the ban that had been imposed in the town of Villeneuve-Loubet, pending a definitive ruling. The court will make a final decision on the legality of the burkini bans later.

At least one mayor elsewhere said the ban in his municipality would stay in place despite Friday’s court ruling. More importantly, the entire issue has now entered the political realm, where it promises to reverberate in coming weeks and months.

Opposition politicians on the right uniformly back a ban on burkinis, as do some in President François Hollande’s ruling Socialist Party, including Prime Minister Manuel Valls. Former President Nicolas Sarkozy, who is seeking centre-right backing for his run for the presidency next year, wants a law banning burkinis. And the far-right National Front wants to go even further and ban all Islamic head coverings from all public places.

So despite the Conseil d’État’s ruling on Friday, the controversy will carry on.

In a way, the burkini polemic is only the latest chapter in a debate that has been going on in France since the 18th-century Revolution. Then, rebels overthrew the monarchy and over time whittled away at the tremendous power that the Catholic Church had held over virtually all aspects of life in France.

The separation of church and state — a fundamental tenet of France’s five republics since the Revolution overthrew Louis XVI — meant that rights and privileges that had been the Church’s, such as marriage, birth and death certificates, and education, were now in the secular realm.

So France’s enduring attachment to laicité, or secularism, stems from a conviction that its founding principles of liberty, equality and fraternity can best be protected by laws that curb any religion’s influence in the public sphere.

That is one, sympathetic explanation for a controversial law passed in 2004 that bars students in primary and secondary schools from wearing religious symbols or garb, including the Islamic veil or the Jewish kippah, “ostentatiously”. Discrete religious symbols such as small crosses are allowed.

For some, the burkini prohibition is an extension of a ban that France imposed in 2010 on the full-body burka and the niqab face veil in public.

But the 2010 measure — Europe’s first such ban — was not directed at any one religion because, with security in mind, it barred any face covering in public, including masks and balaclavas.

So while a ban on beach burkinis — which do not cover the wearer’s face — clearly does not fall under the 2010 law, proponents have variously cited three main reasons they believe the full-body swimsuit nonetheless needs to go.

Some say it is unsanitary, others that it is an unwanted symbol of the enslavement of women. But the most widely cited motivation is that in the context of France’s state of emergency following the recent terrorist attacks, burkinis are a threat to public order because they can inflame religious antagonisms.

Of course such reasoning enrages those who fear the ban will only exacerbate simmering animosity and who say France’s attachment to laicité has over time become an obstacle to integrating religious minorities, especially Muslims, whether from France’s former colonies or more recently from the Middle East and sub-Saharan Africa.

Does all of this take you back to January 2015, when Islamist militants killed cartoonists at Charlie Hebdo magazine? There were similar reactions then, both inside and outside of France.

Internally, politicians doubled down on security and millions of citizens took to the streets to cry, “Je Suis Charlie.” Many people outside of France, however, questioned whether the cartoonists, with their grotesque, provocative stabs at Islam, had not overstepped some red line of decency by smearing an entire religion.

Then, as now, there were those who decried threats to France’s secular tradition, and those who saw France as discriminating against Muslims.

So France is caught between its longstanding attachment to laicité on the one hand, and on the other the need to integrate large numbers of Muslims into a society that, while secular in name, clings to its Christian roots.

France’s struggle to balance the two contrasting imperatives — to protect the state while guaranteeing individuals’ freedoms — is sure to endure, especially as thorny questions of security and immigration will be at the heart of the campaign for the 2017 presidency.