Why the European Union will not survive

Populist opponents of the European Union are fired up, EU supporters more complacent. Impassioned euro-skeptics will cause the EU to collapse. 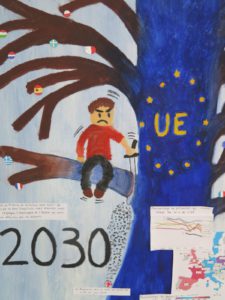 “The collapse of the EU,” by Yesenia Mozo

This is the second of three articles on the European Union by students in the School Year Abroad (SYA) program who are spending a year studying overseas and living with host families. SYA students in France, Italy and Spain recently completed a project focusing on the history and future of the EU. On April 3, SYA students in France and Spain will discuss the prospects for the world’s largest trading bloc in a News-Decoder online seminar.

“Ça m’est égal,” is how my classmate’s host father responded to my questions about the European Union. “It’s all the same to me.”

Paul seems your typical middle-aged Frenchman. He’s slim, smells faintly of cigarettes and is always willing to impart some wisdom on whatever new political crisis is gripping the newspapers.

A die-hard liberal, Paul detests French far-right leader Marine Le Pen and believes immigrants should be welcomed. His ideal image of Europe is one of harmony.

But just 24 hours after a recent debate among French presidential candidates, he pouts and tosses his newspaper onto the kitchen table. “Je m’en fiche,” he bursts out as he pours himself a glass of wine. “I don’t give a damn.”

Paul watched the debate with a slim hope that the Socialist Party, which he normally trusts, would offer answers to his worries. He was deflated when, in his view, no left-leaning candidate provided concrete, workable solutions.

Like many others, he has grown tired of political debate. While a few months ago he would launch into a rant about the values of the European Union, he has a hard time screwing up his energy now. He values the EU, but the allegations of corruption and bloated bureaucracy within the bloc that stream from the radio each morning sap his enthusiasm.

Overconfidence is one of the biggest threats to Europe.

Throughout our program’s examination of the EU, I’ve been struck by how the bloc’s supporters have difficulty mustering passion. They lack the rage and revolutionary zeal of anti-EU campaigners like Marine Le Pen.

Like Paul, many French have grown frustrated with a flawed system and have trouble enthusiastically supporting it. Others simply dismiss the possibility that the EU could ever cease to exist.

Among the French we interviewed for our project on the EU, few respondents predicted the eventual collapse of the EU. When asked whether landmark events like Brexit could affect their lives, most responded that there would be little to no impact. There seemed to be a general consensus that nothing more would change.

While most acknowledged a surge in populism in Europe, very few believed these disparate groups could ever gain enough momentum to tear apart the EU.

“Maybe there’ll be a referendum in France,” a middle-aged woman commented. “But the French will look at Brexit and vote to remain. We are not stupid.”

Such views represent one of the biggest threats to Europe: overconfidence in a liberal ideology. It’s the same trap the British fell into with Brexit and Americans fell into with Donald Trump. No one we interviewed confessed to having predicted Brexit, and for them, the defeat of Hillary Clinton seemed impossible.

I went to bed on the night of the U.S. election fully confident that Clinton would win. I have always lived in a “liberal bubble.” Along with most of America, I underestimated the power, anger and alienation of Trump’s supporters.

For me, Brexit and Trump’s victory prove that we cannot take logic and reason for granted, and that polls cannot accurately capture the sentiment of a nation.

Because they have few worries, EU supporters are not passionate about defending the bloc. Even those who do worry that the EU could crumble find little to be excited about. In unstable times, while the Left struggles to provide answers and citizens distrust their governments, populism thrives.

The different levels of passion and commitment are reflected in opinion polls ahead of France’s crucial presidential election this spring. They show firmer support for the euro-skeptic Marine Le Pen than for centrist Emmanuel Macron, an EU fan who is considered her main challenger but whose electoral support is more tepid.

A month before the first round of the election, a far higher percentage of voters are firmly committed to backing Le Pen than those who might support Macron, according to a recent poll by Odoxa.

Populists are planting seeds of anger.

As I drink my morning cup of coffee, I hear concerned citizens on the radio worry about unemployment. Populist candidates offer scapegoats: the corrupt elite and immigrants. Thus the threads of the European community begin to unravel. When Marine Le Pen speaks, she is met with a chorus, “On est chez nous” — This is our home. Not the home of Europeans, but the home of the French.

We heard this refrain time and again during our interviews. One Briton who had voted to leave the EU put it this way: “Britain needs to find its identity within the world again. To do this, we need to think about our own self-interests.”

We encountered an unwillingness to accept outsiders or Europe as a larger community. Persuaded by promises to put the people’s interests first, citizens are turning their backs on Europe and embracing the far right. While liberals live securely in their bubbles, populists plant seeds of anger.

Without a conviction that Europe is better and stronger as a whole, loose bonds of governance will not withstand the onslaught from impassioned euro-skeptics, and the European Union will ultimately collapse.

Johanna Bandler is spending her penultimate year of high school studying in Rennes, France with the School Year Abroad program. Originally from Norwich, Vermont, Johanna is interested in international affairs, social justice and languages. She has yet to decide on a career, but she expects it will relate to politics.