I discovered a different Middle East in a desert and shop

I used to associate the Middle East with violence, devastation and instability. On a trip to Israel, I discovered hospitality and generosity. 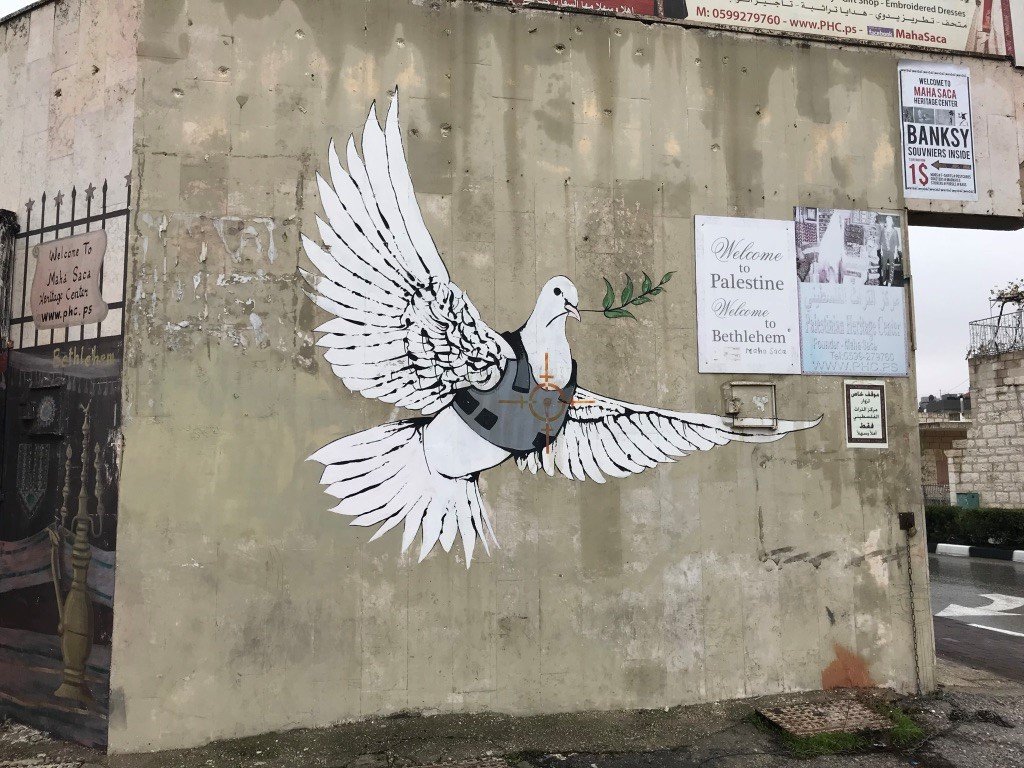 Artwork by Banksy in Bethlehem (Photo by Jasmine Li)

Sitting in the shade, I touch the sand in my hand, cold and moist. Outside of the shade, the sun is trying to melt everything with its fierce heat.

Traveling through the Jordanian desert, we have decided to rest a bit. We have brought no food, so we sit down in the shade and wait for time to pass.

Wadi Ram is in a valley in southwestern Jordan. Famous for its red sand, Wadi Ram features in plenty of science fiction films because its sand resembles the surface of Mars. With its desolate rocks, it might as well be Mars.

Our driver, a Bedouin, comes over to us. “Hi. Did you bring lunch with you?” he asks. I say we have not. “If you don’t mind, come and sit with us. We brought some extra pita breads and Moroccan tea.”

I am a bit worried because I don’t know him and all the drivers are men. But in the end, I say “yes” because I am starving.

We sit in a circle, the four drivers in the shade of a big rock. The drivers pile some branches and rocks to create a simple stove. A man takes out a lighter, lights the branches and gently puts a pot on the fire.

A few minutes later, steam pouring from the pot, tea is ready. A driver blows out the fire and throws the pita bread on top to heat it up.

Soon it is time to eat. The drivers pass the bread around and pour tea into our paper cups. The pita bread smells freshly baked, and the tea eases the heat. Any worries I had melt away.

I discovered hospitality and generosity.

Many people associate the Middle East with violence, devastation and instability. Media help shape a one-dimensional stereotype. But what I, a high school student, discovered in the desert was hospitality and generosity.

My view of the Middle East changed this winter when I traveled to Israel, Palestine and Jordan. Bethlehem was where I first started to think about the meaning of peace.

Bethlehem has been controversial since Israel was established. Located in the West Bank, the city is partly surrounded by a tall wall that Israel considers a security barrier against terrorism, while Palestinians call it a racial segregation or apartheid wall.

The wall appears often on TV, and everyone always says how terrible it is. But what am I to think when I find myself standing beneath it on a cloudy day, the air humid after the rain?

The wall is grey, almost black, with wires on top. It is so heavy that I feel as though it will fall and crush me.

I see peace in these people.

Then, nearby, a young man opens a shop selling pictures of graffiti by Banksy. “Hello, sir. Are you from Bethlehem?” I ask him out of curiosity.

After a brief hesitation, he replies: “Do you mean me or my family?”

He furrows his eyebrows, then speaks in a very serious voice as if being interviewed. “I was born here in Bethlehem. For me, Bethlehem is my home. But my grandfather’s family came from the other side of the wall here.”

He points to a spot on a map on the shop wall behind him. I don’t remember the city’s exact name, but it is in southwestern Israel, not far from Gaza.

“During my grandfather’s generation, they immigrated here. And not long after that, the wall was built, so we stayed here,” he said.

His face betrays neither anger nor despair. He appears calm, as if he is used to the reality of what he is saying.

The stereotype in my head of a Palestinian has me expecting hostility and resentment. Instead, I glimpse his love of the home where he grew up and still lives.

Under the wall, in the desert, I see peace in these people and their great hearts. May shalom and salaam be upon them all.

Jasmine Li is a Chinese national who soon will be starting her second year of high school at the Westover School in the U.S. state of Connecticut. She likes to travel to explore new cultures and people. She also enjoys reading books to expand her horizons.