Decoder: Why the South China Sea matters to all of us

The South China Sea has become one of the world’s most dangerous flash points. So far, the dispute has not resulted in military conflict. But it could. 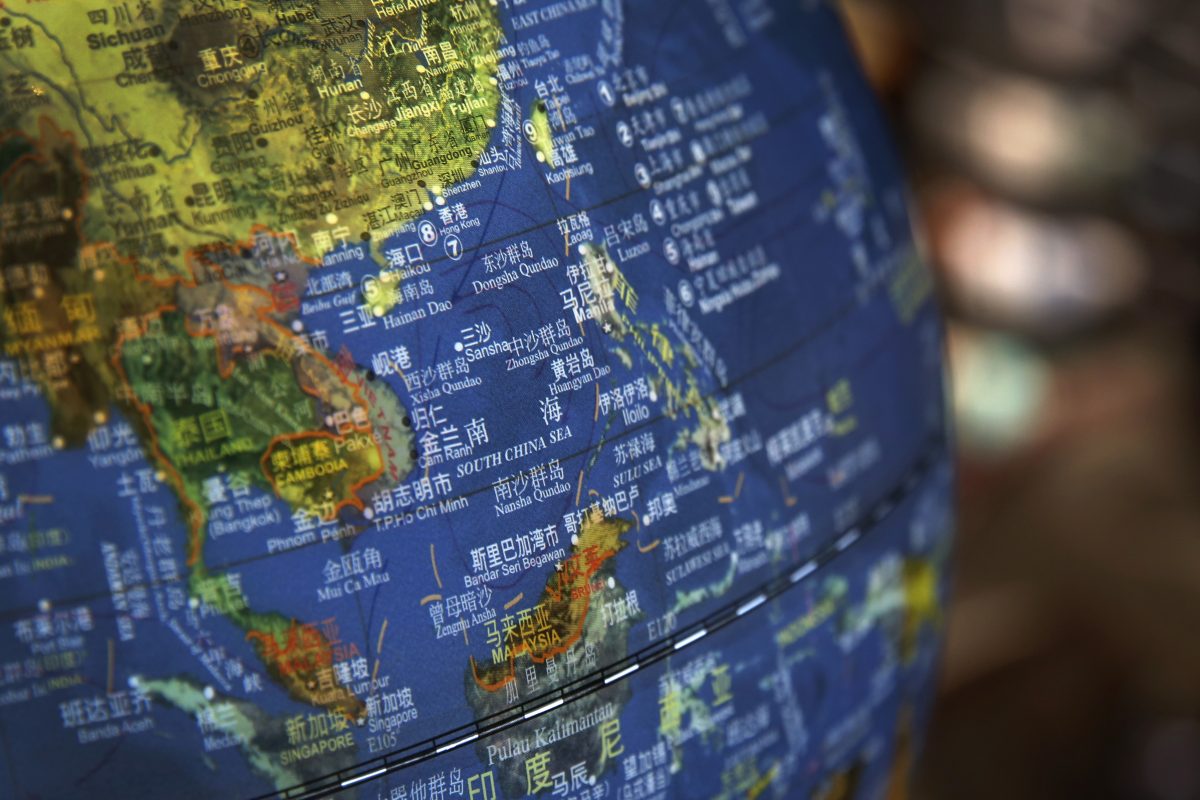 China and its Asian neighbors have been squabbling for decades over territorial claims to rocky outcrops and sandy shoals that dot the South China Sea.

Meanwhile, U.S. military forces keep a close eye on the strategic, resource-rich gateway for much of the world’s trade.

Recently, tensions in the vast region have spiked after two U.S. warships sailed near disputed islands, and the U.S. Senate moved forward with a bill that would sanction Chinese entities that participate in Beijing’s assertive maritime moves in the region.

China responded angrily to both moves, which came during a worsening trade war between the world’s two largest economies and rivals for power in Asia.

The slow-moving dispute is steeped in opaque diplomacy and mind-numbing acronyms. So far, it has not resulted in a major war or conflict. But the region has seen a military buildup.

So why is a dispute over a bunch of rocks with weird names like Fiery Cross and Mischief Reef so important?

Let’s dig into the dispute to examine why the South China Sea is seen as one of the world’s most dangerous flash points.

What are the origins of the South China Sea tensions?

The history of the South China Sea is crucial to understanding the present-day dispute. The territory is the basis of competing claims by Brunei, Cambodia, China, Indonesia, Malaysia, Taiwan, the Philippines, Singapore and Vietnam.

China claims historic dominion over a huge swathe of the sea that encompasses islands claimed by the other nations and cuts through their exclusive economic zones. China has produced evidence ranging from ancient pottery to navigational handbooks used by Chinese fisherman to back its territorial claims.

But the other nations’ claims also have historical support, suggesting that the sea has long been a multinational trading and fishing thoroughfare.

In 2009, China formalized its expansive claims — and outraged other claimants — when it released a map showing a looping nine-dash line that covers 90% of the sea and hugs the coastlines of Southeast Asian nations as far south as Malaysia and Indonesia.

Although Beijing has never made clear exactly what it claims within the loop, the line has become a symbol of national pride. It is emblazoned in every Chinese passport, along with China’s claim over Taiwan.

Why does it matter?

Control over the South China Sea matters to the various claimants because the territory is rich in energy and fishing resources. In addition, its islands, although tiny, are of strategic and military value.

The South China Sea matters to the rest of the world because it is a potential source of conflict, which could drag bigger powers like Japan or the United States into armed conflict with China.

Such a conflict would send shudders through the global economy and financial markets, threatening to freeze the one-third of global shipping that goes through the South China Sea.

There have been few violent clashes over the territorial disputes, aside from a brief but bloody battle in 1974 when China gained control over the Paracel islands from Vietnam.

But the risks of a clash have risen significantly over the past decade as some countries, most notably Vietnam and the Philippines, have pushed back against China’s sweeping claims. China reportedly threatened Vietnam with a naval attack in 2017 if Hanoi went ahead with plans to explore for oil in contested waters.

And all this is occurring in a region that is increasingly armed to the teeth.

China’s military spending has more than doubled over the past decade as it aims to build a “world class” military by mid-century. Defense spending in Southeast Asia has jumped by about 40% in that same period.

Why is the dispute so hard to resolve?

The dispute has proved so intractable because national positions have become more entrenched over time and because Asia lacks strong multilateral institutions comparable to the European Union or the North Atlantic Treaty Organization that could help ease tensions.

The 10-member Association of Southeast Asian Nations (ASEAN) has been painfully slow and ineffective to counter China’s assertive moves. China has masterfully leveraged its economic clout over poorer member states like Cambodia and Laos to sow divisions in the group and block any decisive action or even words from the consensus-driven body.

The Philippines, frustrated by years of brazen activity by Chinese naval vessels and fishing boats, took its case to a court of arbitration under the United Nations Convention of the Law of the Sea, and won an overwhelming victory in the judgement in 2016. (corrected)

The court punctured the legitimacy of the nine-dash line by ruling that large areas of the sea were neutral international waters or in the exclusive maritime zones of other countries.

China has rejected the non-binding ruling and continued extending its reach in the area, underlining the absence of rule of law in the region.

What is China trying to achieve?

China is playing the long game.

With no real rule of law in effect, Beijing has been able to exert its growing economic and military heft to expand its foothold in the sea. It has created “facts on the ground” to give it strategic power and leverage in any negotiations.

China has already transformed the regional security equation with a decade-long “island building” campaign. It has used dredging to reclaim land and has built a permanent, increasingly militarized presence.

China may soon start to believe that even the U.S. military won’t be able to shake its control. Since 2014, China has launched more warships, submarines, support ships and amphibious vessels than the entire number of ships serving in the British navy, furthering the leadership’s dream of a Chinese “blue water” navy.

For the first time in modern history, the United States would not be assured of victory in a naval clash with China.

Know your DoCs, CoCs and UNCLOS

The South China Sea dispute is loaded with acronyms that can make the issue intimidating for the uninitiated.

– The DoC is the Declaration on the Conduct of Parties in the South China Sea. This vaguely worded, non-binding framework agreement was signed by China and ASEAN in 2002 in an effort to minimize the prospect of naval clashes and to pave the way for a formal, more binding CoC, or Code of Conduct.

– The two sides have spent an agonizing 17 years negotiating the CoC. The latest is that they have agreed to a draft negotiating text, meaning that a final deal is likely still years away. Even if it is agreed, the CoC does nothing to address the underlying territorial disputes, which China prefers to address bilaterally with each claimant.

– When is an island not an island? UNCLOS, the United Nations Convention for the Law of the Sea, has the answer. The law, which 168 nations including China have ratified, defines who has rights to which parts of the sea, based on geographical features. Based on UNCLOS, the 2016 U.N. arbitration ruling made clear that islands that have been made habitable by artificial reclamation do not qualify for their own exclusive zone, dealing a blow to Beijing’s claims.

Where is it all heading?

The answer to this probably depends a lot on how China develops as a world power.

Will it take a more moderate approach and seek a peaceful, rules-based order in the South China Sea? Or will it succumb to nationalist impulses and continue to throw its weight around?

Some analysts believe the Chinese military will want to try out its growing might at some point, perhaps with a limited war against a non-U.S.-security ally like Vietnam.

The direction of the dispute also depends heavily on the posture that the United States takes.

In contrast to China’s single-minded determination, Washington has been inconsistent in its approach. It also lacks moral authority in the dispute because it has never ratified UNCLOS.

An Asia “pivot” under former President Barack Obama was meant to refocus U.S. military and economic power on the region as a bulwark to Chinese influence. But President Donald Trump quickly pulled Washington out of the planned TPP trade pact to the dismay of many of its Asian allies.

Lately, the U.S. Navy has stepped up its “freedom of navigation” voyages through the region, which are aimed at keeping Chinese behavior in check.

But Trump’s tendency to criticize traditional U.S. allies more than its rivals like Russia and China has raised doubts over whether the U.S. would come to its partners’ defense in the event of a conflict.

(For another decoder on the South China Sea, click here.)

(The story has been corrected after an alert reader pointed out that Manila’s legal claim against China was handled by an arbitration tribunal under the United Nations Convention on the Law of the Sea, and not by the International Court of Arbitration.)