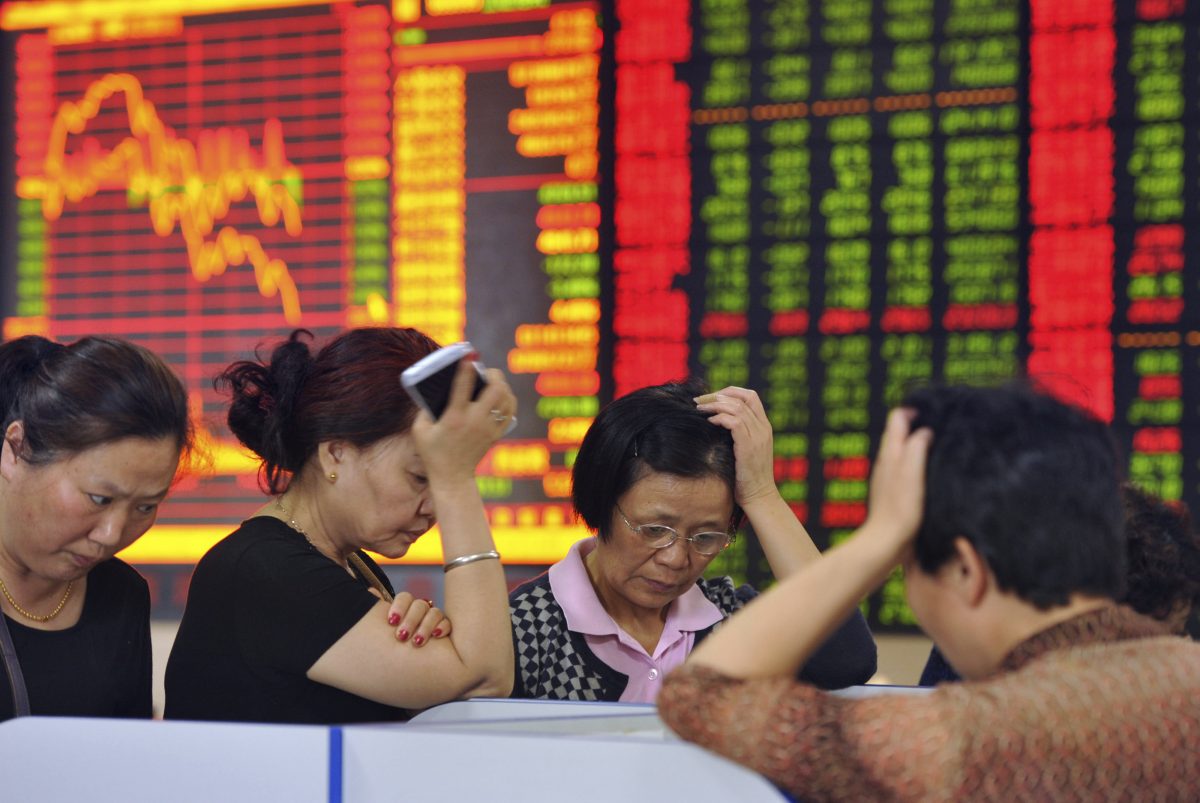 Chinese stock investors react as prices fall in Fuyang in central China. 28 May 2015. (Chinatopix Via AP)

There are many reasons to be worried about the course of China’s economy over the next year or two. The roller-coaster ride of the stock market is not one of them.

But the longer-term implications of the recent 30% slide in Shanghai share prices – or, to be precise, the Chinese Communist Party’s ham-fisted reaction to the plunge – are immense. (For a factbox on China’s share markets, click here.)

By deploying a dizzying array of measures to halt the fall in prices, the party has demonstrated that free markets remain incompatible with its paramount determination to retain a monopoly on power.

Anyone who thought that market forces, and not the party state, would soon be determining Chinese interest rates and the renminbi’s exchange rate have been given pause for thought.

If the party panics over a share price correction that many analysts had anticipated, how can it hope to keep its promise to dismantle capital controls, thus opening the door to destabilizing inflows and outflows of footloose money?

These are questions for tomorrow.

On paper, the immediate consequences of the stock market correction should be inconsequential. There is little if any correlation in China between equity prices and the performance of the economy.

Longer-term costs are sure to outweigh the benefits of any short-term stabilization.

To be sure, margin financing, totaling around $285 billion, is a worry, but it accounts for only 3% of banking deposits. As the party controls the major brokers and the banks, the chances of a systemic financial crisis are remote.

The real worry for the party is that naïve punters who were late to the rally and have taken a bath will look for someone to blame.

They do not have to look far. State-run newspapers led the cheers for the rally.

Forgetting the collapse in prices of 2008, retail investors believed that this time would be different and piled into the market. Even if the chances of social unrest are limited – after all, the Shanghai market is sharply higher both year to date and compared with a year ago – the rally’s abrupt reversal risks undermining confidence in the party.

The resulting threat to its authority – its all-knowingness – explains the extraordinary pains the authorities have taken to limit the damage.

Yet the longer-term costs are sure to outweigh the benefits of any short-term stabilization. Take the hit to the reputation of the People’s Bank of China: the central bank, which has been in the vanguard of financial liberalization and reform, has been reduced to extending credit to the providers of margin finance.

More than 50 central banks around the world have diversified part of their foreign exchange reserves into the renminbi (RMB), recognizing the currency’s growing international role in trade and payments.

The assumption had been that international investors would markedly increase their exposure to RMB assets, especially bonds, if the International Monetary Fund adds the RMB to the basket of currencies making up the Special Drawing Right, the IMF’s in-house reserve asset, later this year.

But now that Beijing has banned major shareholders and executives in listed companies from selling shares until the market recovers, can reserve managers be confident that, in the event of a really big crisis, Beijing won’t apply the same sort of restrictions to foreign bond investors?

The world now knows that the Chinese stock market is like a roach motel: you can check in, but don’t count on being able to check out.

Alan Wheatley is an economics writer and editor based in London. Until recently he was Reuters global economics correspondent, reporting from more than 40 countries and living in London, Frankfurt, Paris, New York, Washington, Tokyo, Singapore and Beijing. He is editor and coauthor of “The Power of Currencies, Currencies of Power,” which explores the consequences of looming challenges to the dollar’s status as the world’s pre-eminent reserve currency.