It upended China’s history. But the 50th anniversary of the launch of Mao Zedong’s Cultural Revolution was shrouded in silence. 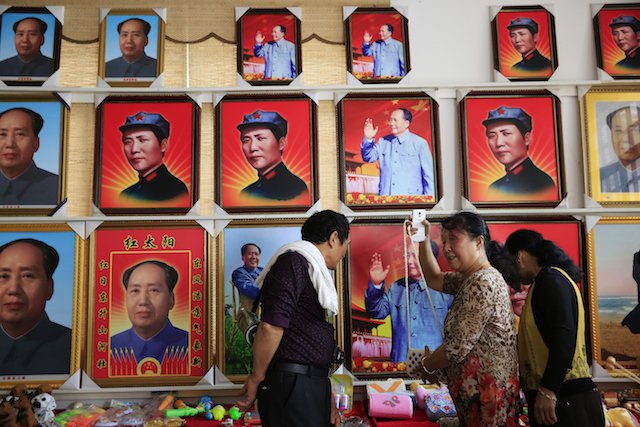 Visitors in front of portraits of Mao Zedong at a souvenir store in Shaoshan, China, 28 April 2016. (EPA/How Hwee Young)

It was one of the most tumultuous events in China’s long history. Yet the 50th anniversary last month of the launch of Mao Zedong’s Cultural Revolution was shrouded in official silence.

No ceremonies were held on May 16, and not one of the front pages of five major Chinese newspapers mentioned the Cultural Revolution, which in the end killed between 500,000 and 1.5 million people and had devastating repercussions on Chinese society.

Today, despite its historic significance, the Revolution remains taboo. Why does China have such difficulty coming to grips with it?

What was the Cultural Revolution?

In 1958, Mao, founder of the Chinese People’s Republic and chairman of the all-powerful Communist Party, ordered the Great Leap Forward, a failed bid to turn the world’s most populous nation from an agrarian society into an industrialized economy. The result was catastrophic.

Estimates vary, but between 18 million and 45 million people are believed to have died, most of them of starvation.

Mao’s authority took a hit, while Deng Xiaoping (Secretary General of the Secretariat) and Liu Shaoqi (President of the People’s Republic of China) gained in prominence.

To reassert his power and reinvigorate his ideals, Mao responded in 1966 by launching the Great Proletarian Cultural Revolution.

He denounced Deng and Liu as supporters of capitalism. Deng was dismissed from the Party, sent to the countryside and humiliated. Liu was arrested and died in prison.

The Revolution aimed to remove all bourgeois influences through violent class struggle and to prevent the spread of capitalist influences. The enemies of Chinese culture were identified as the “Four Olds”: customs, habits, thinking and culture.

A decade of persecution of intellectuals

The next decade was marked by the persecution of intellectuals and revisionists.

Besides those who died, millions more were arrested, tortured, publicly humiliated, raped or deported to rural areas within China.

Injustices were mainly committed by the Red Guards, a group of teenagers mobilized by Mao in 1966 and 1967.

The Cultural Revolution ended with Mao’s death in 1976 followed by the arrest of the “Gang of Four” — a small communist political faction led by Jiang Qing, Mao’s fourth wife.

The Gang had played a vital role in driving the revolutionary spirit of the Cultural Revolution.

Mao’s successor, Deng Xiaoping, took the reins of power in December 1978. He crafted better relations with the United States, tolerated a more open society and started to liberalize the economy.

How could the Revolution have occurred?

Mao described the Cultural Revolution as a means of purging China of its capitalist and bourgeois elements. But other factors motivated the movement.

In his determination to eliminate political opposition, Mao sought to undermine the role of intellectuals in society and emphasized the importance of physical labor.

Factory workers were rewarded while many thinkers, teachers and other intellectuals were either murdered or sent to the countryside for re-education.

Mao’s revolutionary zeal drew in part from the radical political ideas of his wife, Jiang Qing, the most prominent member of the Gang of Four, who were purged after his death.

The Party still holds a monopoly on History.

Today, China’s unease over the Cultural Revolution is palpable.

The Party worries that memories of horrors that were perpetrated under its name could undermine the legitimacy of the communist government, both inside and outside China.

Any criticism of the government is censored. The Party suppresses information about crimes committed by actors in the revolution.

Many Chinese do not know about these unusual “flesh banquets,” where victims’ organs were cut out and eaten by young revolutionaries.

The Party clings to a monopoly on History. Those who suffered the consequences of the Cultural Revolution have no voice, while most who took part remain unpunished.

Social cohesion could be undermined if collective remembrance were allowed. For the Party, what counts today is to make China greater and mobilize the economy: the past is the past.

Zhang Lifan, a Chinese historian working in Beijing, says the Communist Party does not “want the public to be reminded of the history and thus criticize the regime.”

The question remains whether the Cultural Revolution will ever truly be recognized as long as the Communist Party rules China.

Clémentine Babin-Heynard is a first-year undergraduate student at King’s College London, studying War Studies. She is passionate about journalism and would like to focus on both war journalism and art journalism in the future. She is also interested in politics and humanitarian aid.