A huge port city project backed by China in Sri Lanka has the U.S. and India worried about Beijing’s sway in the South Asian island nation. 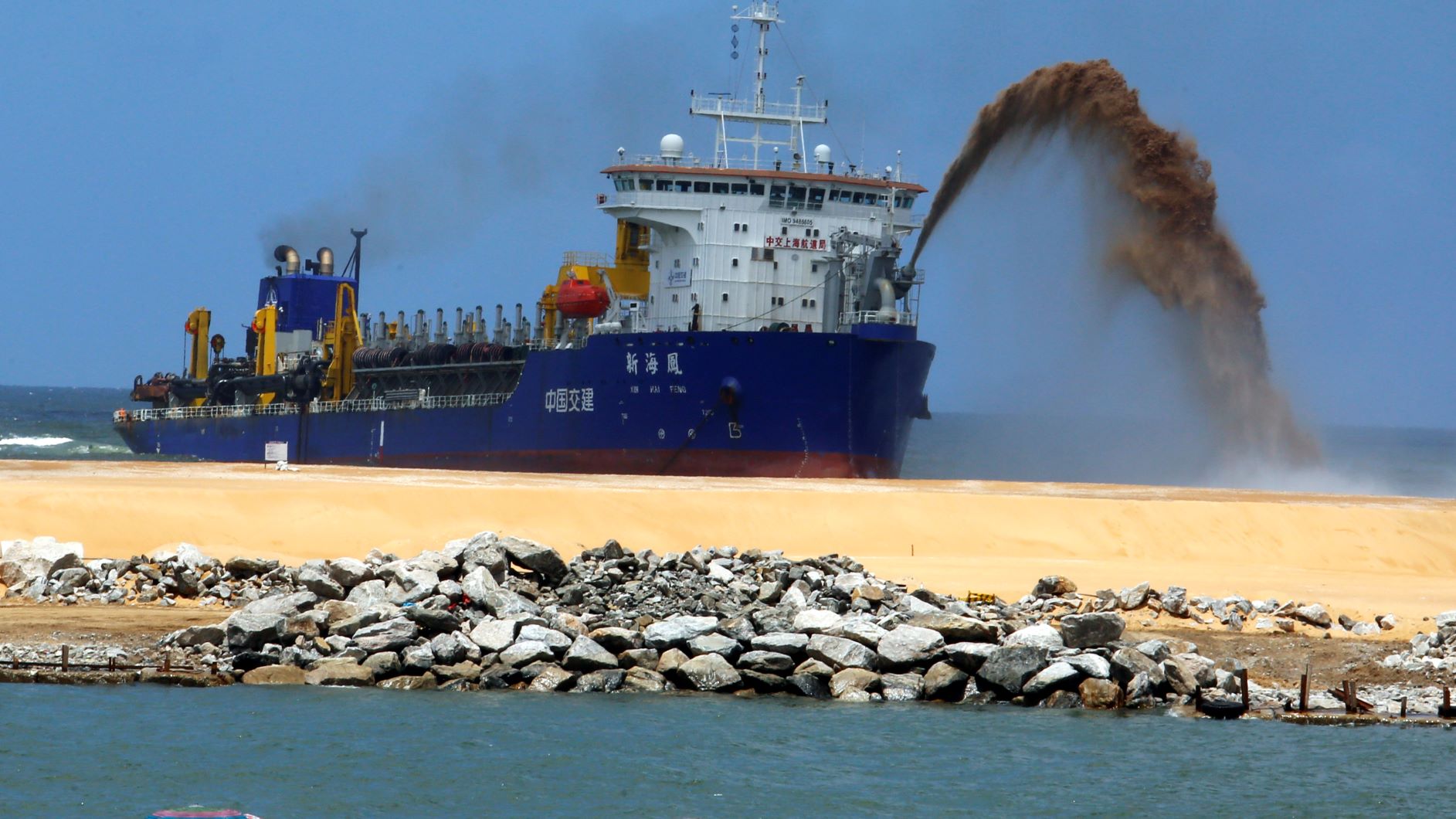 Sri Lankans are familiar with the name “Chilanka,” a pun that combines the name of the island nation in South Asia and its new foreign benefactor, China.

India, which is only 55 kilometers from Sri Lanka, has long been nervous over China’s growing influence over the island. Now, Sri Lankans are getting restless, too.

Recently, a local development run by a Chinese company published its name, Central Park, in English, Sinhala and Mandarin — but not in the Tamil language, which is one of Sri Lanka’s three official languages. A social media uproar ensued.

Another social media storm erupted when a plaque to open a “smart” library at the attorney general’s Office, donated by China, was inscribed in English, Sinhala and Mandarin, but not in Tamil.

In both cases, the Chinese Embassy quickly apologised for the faux pas and promised to rectify it by including Tamil.

Now, a prime slice of real estate in Sri Lanka where the Chinese are building a showpiece regional financial centre to rival the likes of Singapore and Dubai has triggered a geopolitical struggle involving China, India and the United States. The development is stoking anxiety among some Sri Lankans who fear the country is becoming a Chinese colony.

The 269-hectare development named Colombo Port City is being built on reclaimed land from the sea, just off the shores of Sri Lanka’s former parliament building in the heart of the capital, Colombo.

The project is part of China’s ambitious Belt and Road Initiative to build a vast network of railroads and shipping lanes between China and 65 countries in Asia, North Africa, the Middle East and Europe.

The Sri Lankan port project aims to attract investors and financiers from across the world and will allow casinos, which has prompted concerns from the United States that the financial centre will be a haven for money laundering.

“Any legislation relating to the Port City has to be considered very carefully for its economic impact,” Tiplitz was quoted as saying. “And of course, among those un-intended consequences could be creating a haven for money launderers and other sorts of nefarious actors to take advantage of what was perceived as a permissive business environment for activities that would actually be illegal.”

India has not officially raised concerns over the project but is known to have discussed it in informal diplomatic channels. Sri Lankan and Chinese officials have dismissed the U.S. envoy’s concerns as overblown. Senior Sri Lankan Minister, Minister G.L. Peiris said the venture is “transparent” and “there is no exclusivity” in Sri Lanka’s relationship with any one country.

China is playing a bigger role than India in Sri Lanka.

Initially, the development was to have its own laws and regulations, without oversight from the Sri Lanka Parliament and with generous tax benefits that companies in the rest of the country do not enjoy.

Then, the Supreme Court ruled last month that all tax concessions and regulations must be approved by parliament.

China is already firmly entrenched as a key investor in Sri Lanka and is playing a bigger role than India, raising eyebrows among some in the island’s giant neighbour.

During COVID-19, China has donated 500,000 vials of its Sinopharm vaccine, while Sri Lanka has yet to receive vaccine support from the West.

China controls a key international harbour built on the southern coast and has a terminal in Colombo Port. Last month, the Sri Lankan government awarded the construction and operation of an elevated highway on the outskirts of Colombo in exchange for a $1 billion investment.

There are dozens of other projects involving Chinese companies and hundreds of Chinese labourers.

But compared to other projects, it’s the Port City that has drawn wide attention, especially from Delhi and Washington.

Jehan Perera, a political columnist, said many perceive the Port City as a security risk, not only for Sri Lanka but also for nearby India.

“The question is why set up a port city, reclaiming land, when there was enough land inland to set up such a development?” Perera asked. “This is because China wanted a seaside unit close to India.”

Tisaranee Gunasekera, another widely-read political columnist, said the Port City is not a politically neutral development like Dubai’s Palm Island.

“It is seen, rightly, as part of China’s reach for global hegemony,” Gunasekera said. “The world is on the cusp of a new cold war. Port City can drag Sri Lanka into that conflict. Port City will provide employment and investment opportunities to some Lankans. But these will be outweighed by the costs to the country as a whole.”

‘There is a lot of demonizing of China.’

Jayadeva Uyangoda, a political scientist and retired university professor, believes China’s intentions are more economic than political. China is driven by an economic logic, he said, and China has a lot of financial capital to invest, he said.

China, Uyandoda said, wants to emerge as the top global power and needs close allies. Its conduct in Sri Lanka mirrors its moves in Africa and elsewhere in South Asia, including in Pakistan, Nepal and the Maldives.

India, China have been vying for the upper hand in Sri Lanka.

The China Harbor Engineering Company will control 43% of the Port City’s land under a 99-year lease, with the rest retained by the Sri Lankan government.

Touted as South Asia’s top residential, retail and business destination, the development aims to attract more than $15 billion worth in investments over the next few years in financial services, entertainment, a marina, apartment complexes, an international school and an international hospital. It sits within a special economic zone.

India and China began vying for the upper hand in Sri Lanka in the late 1990s. It was then that ex-President Mahinda Rajapaksa, spurned by the West, reached out to China for financial assistance and arms to crush a revolt by Tamil separatist rebels largely in the north and east of the island, where the Tamil minority community lives.

After the rebels were successfully repelled in 2009, China tightened its grip, stirring anxiety in India.

Just last month, when a Chinese company was offered three small islands off the country’s northern coast to set up power plants, India quickly offered to a grant to the government to set up the plants without Chinese involvement.

“The Chinese promote an extremely repressive way of being in the world,” Gunasekera said, summing up many Sri Lankans’ concerns. “The world China will promote will be a world in which the young especially will be deprived of many choices that make up a livable life.”