A Canadian tech firm and foundation have teamed up with an NGO in Rwanda to offer a chatbot that answers young people’s questions about sex. 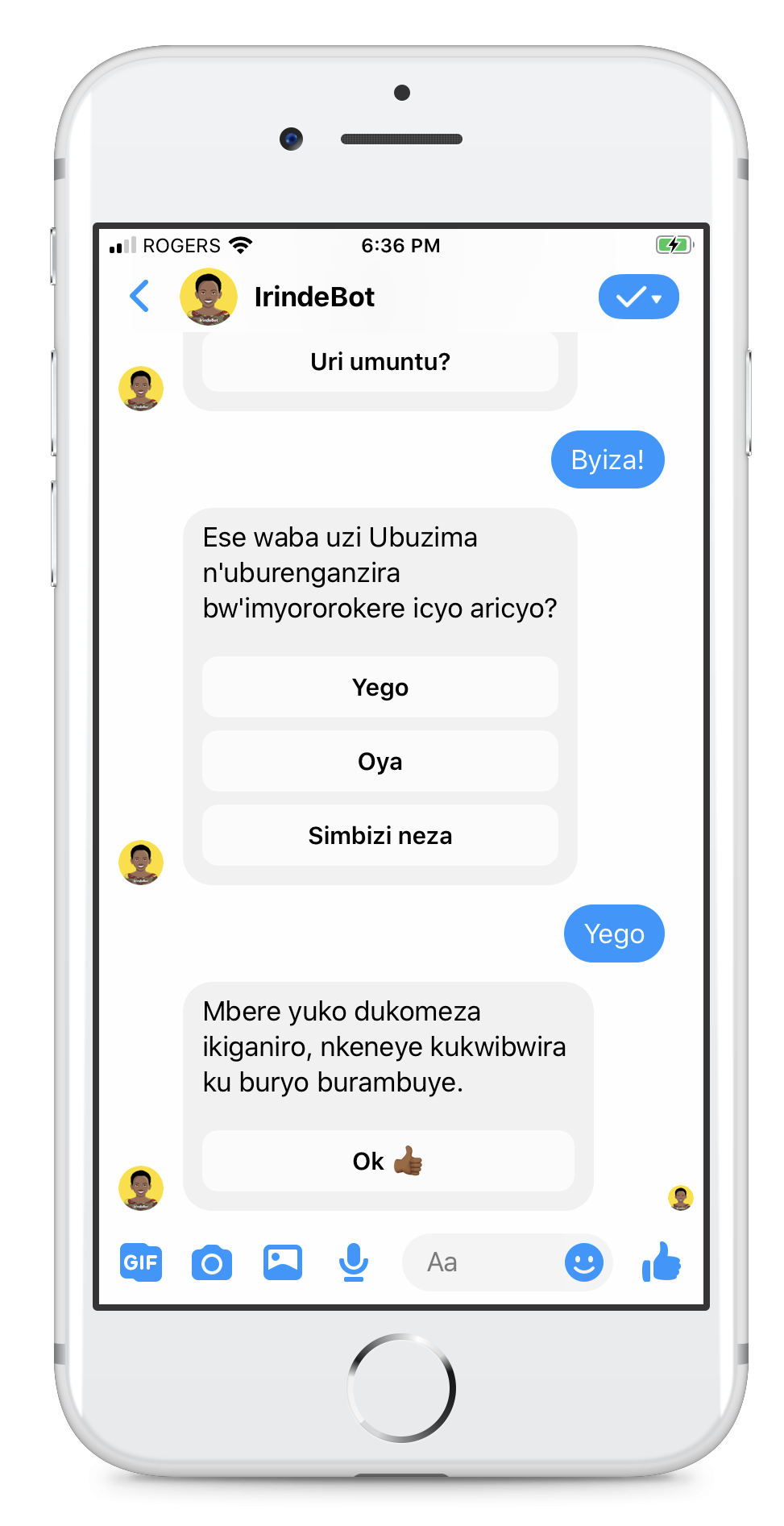 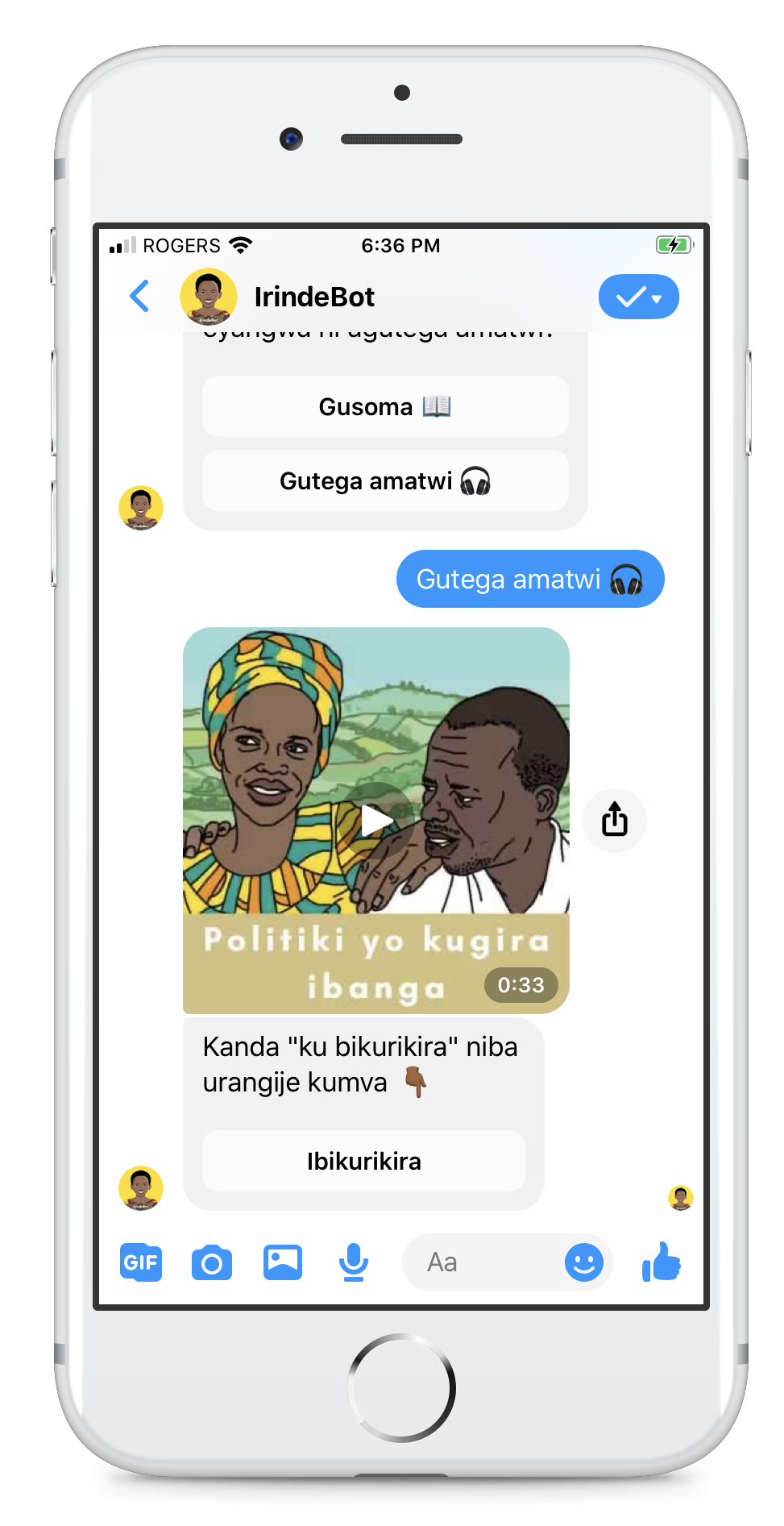 Talking about sex is taboo in Rwanda, where nearly nine out of every 10 teen mothers report being coerced into their first sexual experiences.

But youth in the east-central African nation are now learning about sex, relationships and violence through an online chat application that offers them confidential advice and busts misleading myths.

The chatbot technology being tested in Rwanda holds promise for other countries, supporters say.

Called IrindeBot, the chatbot platform was developed by a Canadian market research firm, Rival Technologies. The chatbot was developed and rolled out by a local NGO — the Rwanda Women’s Network — and a Canadian foundation, Proteknôn Foundation for Innovation and Learning.

Leveraging an uptick in smart phone use and internet access in Rwanda, IrindeBot is targeting at-risk youth and their parents for frank conversations about sex and relationships. The pilot program, funded by a Canadian grant, went live in June and will run through November.

Although COVID-19 has hampered on-site community outreach, more than 1,100 users had consumed the full two hours of content by July, and another 4,000 users were tapping into the chatbot.

The chatbot offers young people guidance about sex and relationships.

Recent research on adolescent perceptions of love and sex in Rwanda revealed that youth regularly turn to internet pornography for guidance about sex and relationships. Common myths hold that a girl cannot get pregnant standing up and that boys are not fertile until they have a nocturnal emission.

“One of the challenges is that young people don’t get straight-up sex education,” said Kirsten Pontalti, the project lead and executive director of the Proteknôn Foundation for Innovation and Learning.

“They may learn about their anatomy, but they don’t have straight-up answers about consent, relationships and coercion. A lot of the questions we are answering came directly from research with youth in Rwanda,” said Pontali.

The unique initiative comes against a dire backdrop: Around the world, teen pregnancy rates are climbing, and young girls 15-19 years old account for nearly three quarters of new HIV infections.

IrindeBot offers private, two-way conversations on a smartphone or computer via Facebook, in either Rwanda’s national language, Kinyarwanda, or English. Users connect to the chatbot with their Facebook account, ensuring a private connection even if the individual shares the same device with others.

Once connected, a user can ask questions not covered by the chatbot’s scripted conversations and get tailored answers from experts with Rwanda Women’s Network.

One of Africa’s smallest countries, Rwanda has boasted strong economic growth in recent years, and its official economic growth plan is tied to information and communications technology, including planned improvements in internet coverage.

Experts behind the chatbot rejected text messaging as a delivery platform because it relies on high user literacy. Radio call-ins are not private.

Privacy is key to IrindeBot’s success, according to Gisele Umutoniwase, adolescent sexual and reproductive health coordinator at Rwanda Women’s Network, who said both boys and girls are asking highly sensitive questions.

Some girls want to know what to do when their boyfriend threatens to break up if they do not have sex. What can a girl do if she gets pregnant? What are the laws governing abortion and birth control? Can a boy be the victim of gender violence?

Parents in Rwanda are enthusiastic.

Before the chatbot was launched, Umutoniwase thought parents would be turned off because in Rwanda, discussing premarital sex is frowned upon. But interim results showed that parents are among the most enthusiastic ambassadors of the technology.

In its design, conversations in Irinde are confidential, engaging and friendly, without moral judgement — critical advantages for success of the technology.

“That’s what you won’t get in SIRI,” said Sylvia Wong of the United Nations Population Fund (UNFPA), referring to Apple’s virtual assistant. “It is one thing to build the conversation content, but how do you create the conversation appeal to ensure empathy, sensitivity and confidentiality?”

Because Rival designs technology for market research, it is sensitive to ethical, security and privacy issues. “By using this technology for this project, we can ask them questions about their experience,” said Rival President and Senior Methodologist Jennifer Reid. “It’s more personal and anonymous.”

Hope for other countries

Despite COVID-19 restrictions on the movement of those rolling out the platform, results from the pilot program have exceeded expectations, Pontalti said. Nearly half of the users said they came away knowing more about the risks of pornography or how to communicate with parents or children. Just under a third of the users are caregivers, and the rest are 13-25 years old.

Because only about 20-25% of the content is specific to Rwanda, the chatbot’s backers hope to launch the technology in other countries. Grand Challenges Canada, which is backing the Rwanda initiative, is funding three others — one in Brazil, another in Kenya and India, and a third in Nicaragua. UNFPA is also testing a chatbot in Mongolia aimed at adolescent girls.

How effective are bots?

“Ultimately it depends on access to technology and the people behind the algorithms,” said Wong of UNFPA.

”Many young people are using phones of others. If it’s low-tech and frugal, all the better to reach them now in a confidential way. But frontier technologies are our present and future. The wave will come when young people are connected with those higher-level technologies.”

(In an earlier version of this story, we misidentified Jennifer Reid, who is President and Senior Methodologist of Rival Technologies. We have also corrected the roles of the different partners: Rival Technologies developed the chatbot platform, while the chatbot was developed and rolled out by the Rwanda Women’s Network and the Proteknôn Foundation for Innovation and Learning.) 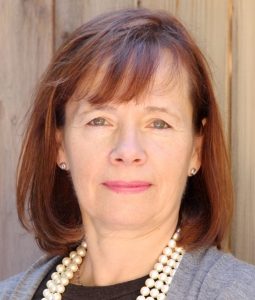 Susanne Courtney is a freelance journalist, writer and communications advisor. A 2019 Fellow in Global Journalism at the Munk School of Global Affairs, she is former executive director of Action Against Hunger Canada and a former Canadian Foreign Officer. Courtney has led and owned award-winning North American public affairs and communications firms. Her writing focuses on international development and development finance.