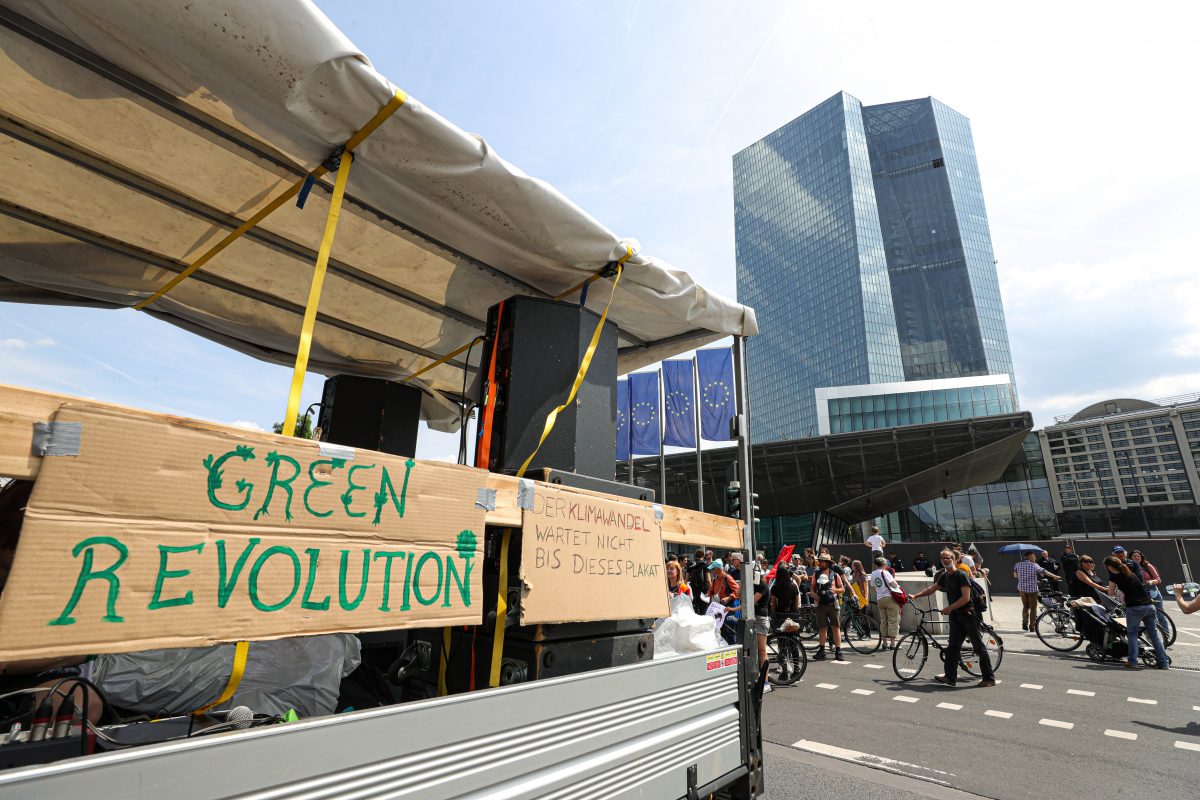 Demonstrators in front of the European Central Bank, Frankfurt, Germany, 24 May 2019 (EPA-EFE/Armando Babani)

In this article, Positive Money — a UK non-profit that favors bank reforms to address social, economic and environmental challenges — responds to arguments by three News-Decoder correspondents that central banks are not the proper institutions to drive policy combating climate change.

We are delighted that News-Decoder’s correspondents have responded to our argument that central banks should do more to support the green transition. Their contributions have spurred thought-provoking debate on a critical issue. Keen to deepen the conversation, we have offered our own rejoinder.

Positive Money is not calling for the Bank of England to set its own goals and guidelines for objectives of its choosing. Rather, we are calling on the central bank to take action that is consistent with the terms of its mandate.

The 2012 Financial Services Act amended the mandate set out in the 1998 Bank of England Act to read: “An objective of the Bank shall be to [protect and enhance] the stability of the financial [system] of the United Kingdom”.

The Bank of England recognizes that climate change poses a huge risk to financial stability. It is therefore within the Bank’s mandate to take action to mitigate against this risk, in the same way that it makes policy interventions aimed at reducing risk in the housing market.

We argue that the Bank of England is similarly empowered to use its macro-prudential toolkit to curb the flow of lending towards environmentally unsustainable ends.

Furthermore, the Bank of England’s mandate also includes “support(ing) the economic policy of Her Majesty’s Government, including its objectives for growth and employment.”

The UK government has recently introduced a target to bring emissions to net-zero by 2050.

As well, its Climate Change Act 2008 sets legally binding targets for reductions in emissions (which the Climate Change Committee estimates the UK will fall short of in its fourth (2023-2027) and fifth (2028-2032) carbon budgets).

Efforts by the Bank to help facilitate greener investment would not only be consistent with these legal and policy commitments, but also essential for achieving them.

We also disagree with Tiziana Barghini’s characterization that it would be irresponsible for central banks to steer investment away from certain companies or industries. Throughout the post-war period — the so-called ‘golden age’ of capitalism — central bank intervention in credit allocation was the norm, economist Josh-Ryan Collins has demonstrated.

In fact, in the absence of central bank guidance, and left to its own devices, the market is currently allocating credit irresponsibly. Banks have poured at least $1.9 trillion of new money into fossil fuel extraction since the November 2015 signing of the Paris Accord.

Such investments are currently being made on the assumption that fossil fuel companies will be able to extract all of the reserves they sit on. But burning these reserves would result in us far exceeding the global carbon budget, and set us on course for temperature rises beyond what can support our existence as a civilisation. In other words, it is physically impossible for fossil fuel assets to maintain their value.

This leads us to Alan Wheatley’s argument, that financing the green transaction is solely a matter for fiscal policy.

This simply cannot be the case. As Bank of England Governor Mark Carney has recognised, the trillions of dollars of capital that the private sector has plowed into fossil fuels will need to be reallocated to green alternatives for countries to meet the even relatively modest targets of the Paris targets.

Government spending and taxation will of course play a vital role in delivering the green transition. But we also need to address how the wider financial system is currently fuelling climate breakdown. The scale of the climate emergency makes it a matter for all public regulatory bodies, including central banks.

(To read our decoder on the role and importance of central banks, click here.)

Simon Youel is a policy and media officer at Positive Money. Positive Money is a non-profit research and campaign organisation working towards “a money and banking system that enables a fair, sustainable and democratic economy.”